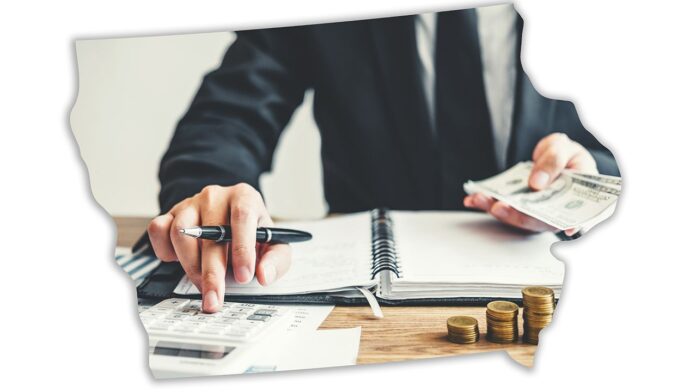 The legislature passed an $8.1 billion FY 2022 state budget, which provided an estimated $1 billion in tax relief to taxpayers. This brings the budget well under the average taxpayer’s ability to pay for it, as measured by the Tax Education Foundation’s Conservative Iowa Budget, which sets a maximum threshold based on population growth plus inflation.

This budget is $290.7 million more than the FY 2021 budget. The $8.1 billion package is more than $4 million above what Ms. Reynolds initially proposed. Nevertheless, Iowa’s fiscal house is in good standing.

The budget spends 97.66% of projected revenues for FY 2022, leaving a projected $385.8 million surplus. There is plenty of money available for a rainy day, including a combined $817.9 million in the Cash Reserve Fund and the Economic Emergency Fund and $316.4 million in the Taxpayer Relief Fund.

Ms. Reynolds and conservatives are criticized by progressives and liberals who argue that areas of the state budget are underfunded, especially public education and health care (DHS), which includes Medicaid. However, this does not mean that spending has declined.

From 2013-20, Iowa’s budget has grown 1.6 times faster than population growth plus inflation. Last year’s budget (FY 2021) was considered a “status quo” budget, with spending only slightly higher than the previous year. This is hardly austerity-style budgeting and only in government can slowing the growth of spending be considered a “cut.”

Spending restraint is the cornerstone for sound fiscal policy and helps keep taxes in check. A priority for the governor was making Iowa’s tax code and economy more competitive, while the legislature provided needed tax relief.

In part, this tax reform repealed the state’s stringent income tax triggers, which will allow the top rate to fall to 6.5% in 2023. This will provide greater tax certainty and create an opportunity for future tax rate reductions. Also, Iowa’s obsolete inheritance tax will be phased out over a five-year period. The county mental health property tax levy will be phased out as well.

If policymakers want to reduce tax rates, allow for more money to stay with families and make the tax code more competitive with other states, spending must be prioritized and limited.

Spending discipline is vital, and the Iowa Code limits spending to 99% of projected revenues. Strengthening the spending limitation by placing it in the state constitution and limiting spending to population growth plus inflation, as outlined in the Conservative Iowa Budget, would better match the average taxpayer’s ability to pay for it every session.

Vance Ginn, Ph.D., is chief economist at the Texas Public Policy Foundation based in Austin, and he is the former chief economist of the White House’s Office of Management and Budget during the Trump administration.

How to freeze your credit to protect your identity