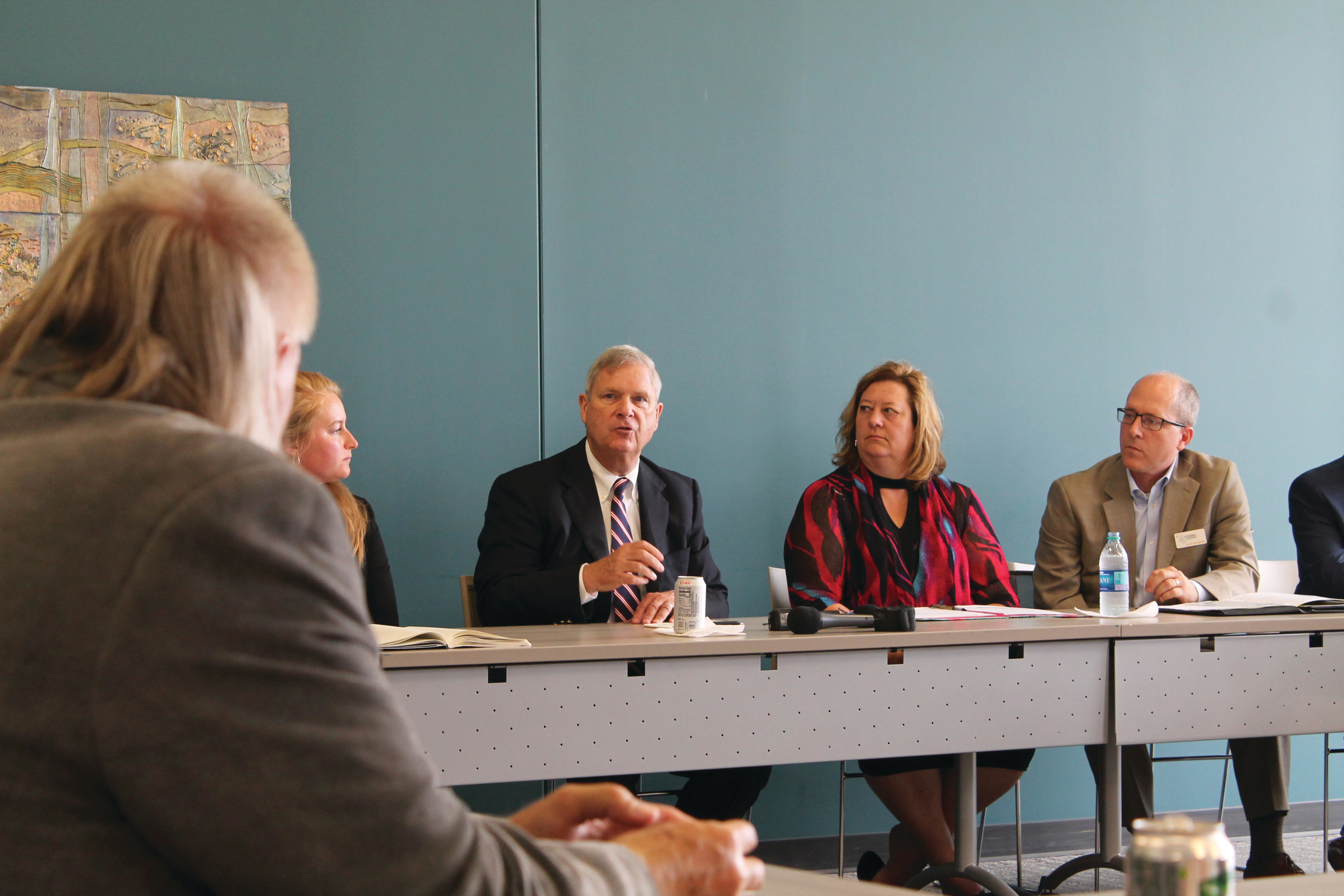 “The reality is this agreement needs to be ratified in 2019; if we extend into 2020, it gets mixed up in professional and political politics that make it much less likely to get a vote in Congress,” Mr. Vilsack, now president and CEO of the U.S. Dairy Export Council, said of the replacement for the North American Free Trade Agreement (NAFTA) during a trade-focused roundtable hosted by the Cedar Rapids Metro Economic Alliance on June 17.

Mr. Vilsack said combining the food and agricultural industries together accounts for roughly 43 million U.S. jobs, making it the single largest source of employment in the country and encompassing about 28 percent of the American workforce.

In Iowa alone, “agriculture exports are worth $10 billion a year and more than 86,000 jobs are supported by the agricultural trade,” said Jessica Hyland, executive director of the Iowa Biotechnology Association, in opening remarks at the event. “Forty-nine percent of our agricultural trade goes to Mexico and Canada … which is a pretty amazing statistic. Passing USMCA will protect America’s trade with our neighbors to the north and south. It would expand trading [of] dairy, poultry, eggs and other goods and will reduce trade-destroying biotechnology policies.”

Two major hurdles to passage have already been removed, with the resolution of steel and aluminum tariffs on Mexico and Canada, and the sidelining of President Donald Trump’s threats earlier this month to levy tariffs on Mexican imports to force tougher immigration enforcement.

But the USMCA is still facing pushback from skeptical Democrats, who are calling for changes to environmental and labor provisions, including allowing Mexican workers to vote for union representation with a closed ballot. Mr. Vilsack said he worries that if the fight becomes too drawn out, the president could withdraw from NAFTA without a replacement – a possibility he described as potentially catastrophic for Iowa farmers and ag-dependent businesses.

“President Trump has indicated that he might withdraw from NAFTA,” he said. “Were he to do that … the advantages we have in these markets, not having to pay tariffs, would go away.”

Mr. Vilsack said the USMCA will help the dairy industry by continuing open access to its No. 1 market of Mexico. It would also open Canada’s supply management system to more U.S. dairy, and clear the way for $220 million in additional sales.

“USMCA is very critical to our farmers and our businesses,” agreed Gretta Irwin, executive director of the Iowa Turkey Federation, adding that Iowa is the eighth-largest turkey-producing state and the fifth-largest processor, with most exports going to Mexico.

That industry suffered a blow when China halted poultry imports in 2015 due to an avian influenza outbreak, and imports that have not yet resumed.

Mr. Vilsack suggested that passage of USMCA could provide momentum to solve other thorny trade issues, like the ongoing battle with China, and said he was optimistic Congress and the Trump administration would ultimately get to “yes” on the deal.

“I’m optimistic because I think, at the end of the day, this agreement is better than the one we have in place,” he said. “And I think the administration understands politically that our partners have been incredibly patient, but patience is not infinite.”

One thing Mr. Vilsack is not optimistic about is recovering market share lost to other countries. Roger Stutsman, owner of Eldon C. Stutsman Inc. of Hills, noted it had taken the agricultural community 17 years to fully recover from the 1980 grain embargo against the former Soviet Union, and asked how long it might take to recover from trade squabbles with China and other partners.

“At least on the on the soy side, we’re not going to get back the Chinese market for a long, long time,” Mr. Vilsack said. “The reason is, we are fundamentally asking China to change the way they do business. … As in, no longer providing subsidies to state-owned enterprises that they currently provide, no longer utilizing the intellectual property they get in joint ventures with U.S. companies to help their state-owned enterprises compete. … That is not going to change unless their economy tanks or the rest of the world is encouraged to join us in changing this way of doing business.”