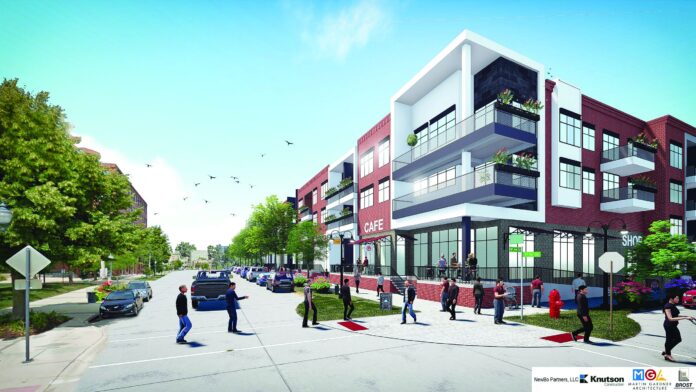 A preliminary rendering of the NewBo gateway project shown from 10th Avenue SE, looking down Third Street toward the north and west. A community courtyard is located above enclosed parking surrounded by apartments. CREDIT BROST/MARTIN GARDNER

It’s looking like a big year for transformative developments in central Cedar Rapids, with at least two projects totaling more than $80 million set to pop, and others that potentially could reach the construction stage.

Big projects can take a long time to get off the ground, however, requiring long lead times to arrange the financing, land, incentives and regulatory approvals. Here are two that appear almost certain to “go vertical” in 2020.

A gateway to NewBo
A $32 million project that will lend a new aspect – and amenity-packed apartment living – to Cedar Rapids’ NewBo District is set to launch this spring.

The block located north of the Cherry Building is hard to miss for visitors entering NewBo from the downtown area via Third Avenue. It’s a mixture of aging warehouse buildings and empty lots, bounded by 10th and Ninth avenues SE and Third and Fourth streets SE, that once housed Loftus Lumber.

The project is being designed with 179 living units above parking and commercial space. Developer Richard Sova of Landover Corp. believes it will offer the most complete amenity package of any property in the market, including a full fitness center, dog spa, café rooms, storage lockers, dog walking areas and outdoor grilling stations.

“We’ve been looking at the smaller projects going up in the area to see what works and what doesn’t,” said Mr. Sova, who hasn’t yet hit on the perfect name for the development. “We’re trying to build exactly the right project for the market.”

The building will include a mix of studio, one-bedroom and two-bedroom units, some with an extra den room.

The design evolved with input from the neighborhood, eventually taking shape as a red brick and sandstone structure with ample design detail to create a lively feel.

The project’s large scale and location at the district’s main entrance, as well as its close proximity to historic buildings, made the design very important, according to Abby Huff, executive director of the Czech Village New Bohemia Main Street District.

“We wanted something that would blend in with the historic character of the neighborhood,” Ms. Huff said. The final design suited the neighborhood well, she said, incorporating some of the architectural features of the neighboring Cherry Building, a century-old factory building that has transitioned into offices and artist studios.

The building was designed by Brost Architecture and Martin Gardner Architecture; Knutson Construction will be the general contractor.

The city of Cedar Rapids has been collaborating with Landover on not only the site plan, but changes in the neighborhood that will enhance the development. They include a railroad Quiet Zone designation that will make the area more desirable for residents and plans for reconstruction of Ninth Avenue SE, according to Caleb Mason, the city’s economic development analyst.

A development agreement for the project is expected to come before the Cedar Rapids City Council in early 2020, setting forth incentives and developer obligations.

City council members see the project as a new “gateway” from downtown into NewBo. It will also add nighttime population that the district needs to attract retail businesses such as grocers, delis and bodegas, Ms. Hoff said.

Mr. Sova said the project will be market-rate housing, and he expects demand for the housing from both younger and older householders who want lots of amenities and an urban setting.

Landover Corp. is based in Barrington, Illinois, but is becoming a active player in the Eastern Iowa housing development scene, with projects in Cedar Rapids, Marion and Marshalltown. It is aiming for a spring 2021 completion date.

Guaranty Bank block hotels
The Heart of America Group is feeling confident about a 2020 launch for its $51 million project to redevelop the former Guaranty Bank block – work that has been delayed by the need for historic tax credit approvals.

The project will entail the renovation of the architecturally and historically significant Guaranty Bank & Trust building into a boutique hotel under the Courtyard by Marriott flag, and construction of a nine-story AC Hotel that would incorporate the former World Theatre as its grand entrance façade.

“I was hoping we’d get to this point sooner,” Heart of America Group CEO Mike Whalen told the CBJ.

Securing historic preservation tax credits that are essential to financing the project has been one of the larger hurdles, partly because the project saves only part of the historic theater building, which was not only gutted before the current project, but has structural deficiencies.

Such unexpected delays are not uncommon in historic preservation projects, noted Mr. Whalen, who has done several.

The developer has collaborated with the State Historic Preservation Office to blend historic preservation with new construction and treatment of the World Theatre building, said Caleb Mason, the city’s economic development analyst.

Heart of America Group was recently completing its Part 2 application for Historic Preservation Tax Credits, which requires extremely detailed demolition and construction plans. If the tax credits are approved as hoped, the two hotel projects will proceed simultaneously, Mr. Whalen said, along with work to reinforce and repurpose the former World Theater.

The hotels will also bring a Johnny’s Italian Steakhouse and a rooftop restaurant and bar – The Republic – to downtown Cedar Rapids.

The city of Cedar Rapids is betting big on the project, providing an incentive package worth about $13.6 million and lending its support for state grant applications. Mayor Brad Hart says downtown hotels are an impact project that will bring more visitors to the city and spur more development and business activity in the district.

A packed pipeline
Among the other large-scale Cedar Rapids projects that could move into construction in 2020, Mayor Brad Hart mentioned the 25-story mixed use tower project west of the Paramount Theater, led by Steve Emerson of Aspect Architecture, and the $40 million office expansion and renovation in the Transamerica Financial Park.

While there’s been little news on the tower project, Caleb Mason said that Mr. Emerson has been working to finalize the concept and design, and to get firm cost opinions that will be important to determine the project’s financial feasibility, financing and the level of city incentives for which it could qualify. He expects a project term sheet to be presented to the city council this month or next, providing the basis for consideration of a development agreement with the city.

Transamerica in 2018 committed to a new 51,000-square-foot addition that will connect the two main office buildings and create a new main entrance at its Transamerica Financial Park, and to renovate about 480,000 square feet of office space formerly leased by Hibu.

Work on a potentially large redevelopment of the city-owned “First and First West” site in the city’s Kingston Village neighborhood seems to be a longshot in 2020. The city issued a request for proposals Dec. 16 for a destination-style development that creates a new attraction for downtown.

The high-profile site off Interstate 380 at First Street and First Avenue SW is sure to attract developer interest, as it has during one previous request for qualifications process. Totaling about eight acres, the multi-parcel site is easily accessible from I-380. It was twice considered for the Cedar Crossings casino project before the state gaming commission refused to grant Linn County a gaming license.

The city will consider such criteria as developer qualifications and feasibility, the project’s economic impact and its contribution to the downtown area. It hopes to make a decision on a preferred developer this summer.   CBJ