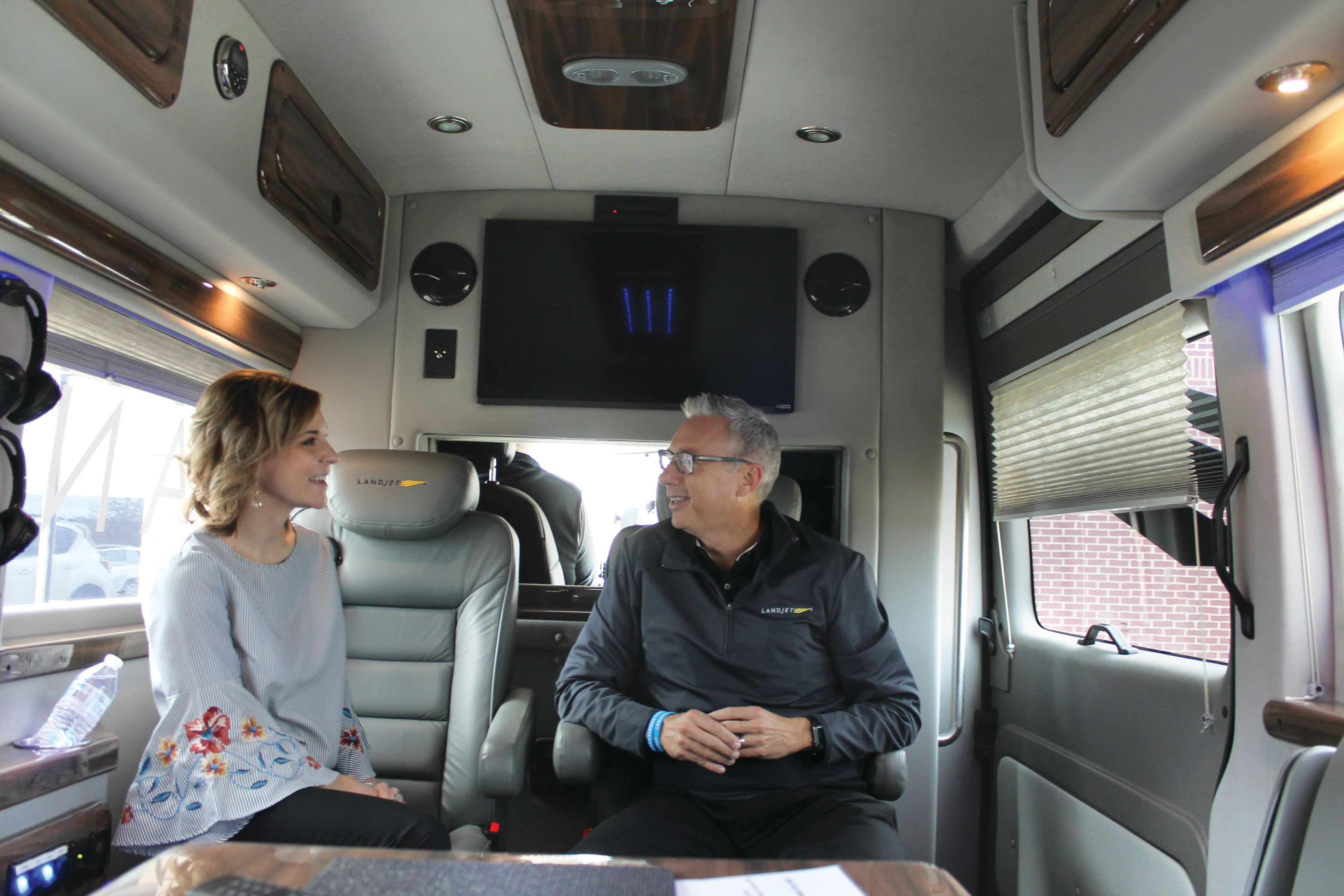 LandJet’s Chelsea Powers and Mark Ross chat in one of the company’s mobile offices during a recent visit to the Corridor. Ms. Powers is Eastern Iowa branch manager and Mr. Ross is CEO of the Bettendorf-based transportation startup, which makes traveling time more productive. PHOTO DAVE DEWITTE

After a successful launch, the Iowa-based mobile office startup LandJet is preparing for a national rollout next year.

Hailing from Davenport, LandJet operates mobile offices built on a 159-inch-long utility van chassis. They provide a rolling workspace that can be booked by groups of up to eight on an hourly basis with a professional driver provided. (He or she prefers to be called the pilot, and may issue warnings such as “we’re entering some turbulence” when the road turns bumpy.)

CEO Mark Ross says on the cost and convenience scale, LandJet is somewhere “between a high-end limo and a charter jet” for regional business travel.

“It extends your day, and adds to your quality of life by allowing you to get work done while you travel,” Mr. Ross said during a recent stop at the CBJ’s offices in North Liberty. “It’s hard to put a price on your time.”

The cost of booking a LandJet is $120-$150 per hour, with an additional charge of $30-$40 per person. While the rates can easily bring the cost of a day trip to more than $1,000, it can still provide great value by enabling passengers to complete billable work on the road, instead of driving or trying to relax.

A former CPA, Mr. Ross started the company with business executive and entrepreneur Jim Thompson. Both are veteran investors who have worked together on projects.

The idea came about when Mr. Thompson, who was working as a temporary CEO, bought a Dodge Caravan minivan and had it retrofitted with a desk and Wi-Fi. He later found he could order larger and limo-quality mobile offices through an existing company called LandJet, owned by John Dingle in the RV manufacturing hub of Elkhart, Indiana.

During lunch one day, Mr. Thompson asked Mr. Ross if he had any new business ideas. Mr. Ross said he could see potential in mobile offices like those made by LandJet. They decided the real market lay in operating the vans for hire rather than selling them, and assembled a group of about 10 investors to fund it. They then purchased the business assets from Mr. Dingle, including the name.

In the first year, the company based LandJet operations in the Quad Cities, Des Moines and Minneapolis. It has handled about 400 bookings, and counts two of the largest law firms in Chicago as its clients, Mr. Ross said.

Those firms use LandJet to transport litigation teams to trials and hearings outside of Chicago. It enables them to use their travel time for preparation and debriefing, and allows them to arrive in court more relaxed and focused.

Other customers have included large corporations and a Miami development firm that booked LandJet to take a team on a tour of strip malls it was scouting for potential investment in the Twin Cities.

LandJet recently closed its first funding round, and is planning a second round in 2020, Mr. Ross said. The additional funding will enable the company to roll out nationally with about 200 vehicles through a franchise network. Plans call for stationing LandJets in 25 large metro markets such as San Diego, Cincinnati and Boston. Through a hub-and-spoke system, LandJets would also provide service to about 144 secondary markets within a reasonably short driving distance.

LandJets come in two basic varieties. The Board Room has five executive seats laid out on two sides of a meeting table; the Rolling Executive has a small executive desk and a smaller table with seating for about four.

All LandJets come with video screens that can display the internet, television or be used for PowerPoint or other graphic presentations. They have Wi-Fi, Bluetooth, refrigerators and high-end sound systems. Unlike an RV, they don’t have a bathroom or kitchen.

The business has been growing in Chicago just from the visibility of LandJets on congested freeways, he said, and some customers have booked the vehicles to pick up their international clients at O’Hare International Airport.

“LandJets are a little easy to spot out of the 1,000 black limos lining up at O’Hare.”

As the need for vehicles increases,  LandJet would like to bring production of its van conversions to Iowa in order to reduce the time and expense of obtaining vans and service from out of state, Mr. Ross said, possibly through an arrangement with a Quad Cities RV dealer that offers the service. CBJ