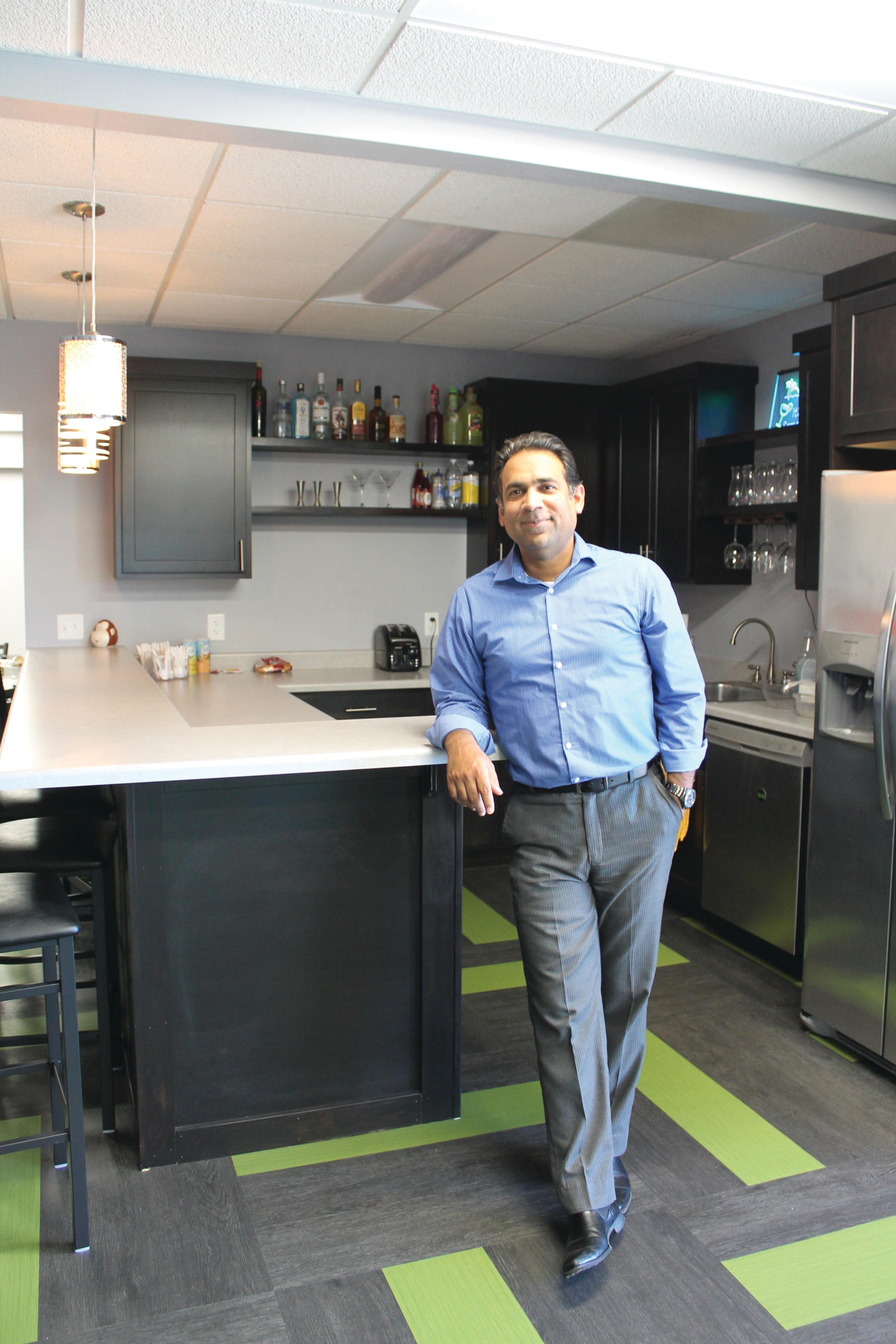 When Pankaj Monga has clients in for a visit to his Hiawatha-based international marketing firm, he wants them to be able to feel the energy of the team interacting with customers and each other.

To Mr. Monga, who has a marketing agency background, energy is not an afterthought. It’s the feeling you get when your workplace is a hive of conversation, activity and workflow, and makes you feel like you are part of a team doing something creative and important.

Creativity is at the heart of what Channel Fusion does, helping companies engage their dealers and other trade partners in marketing initiatives such as co-op advertising and sales incentive programs called SPIFFs. The company began with six employees and a handful of large clients like Deere & Co, and has since grown to dozens of clients and 70 employees.

While there was energy in the company’s North Center Point Road office 18 months ago, its flow was interrupted and broken – the result of incremental growth over 16 years from a 1,000-square-foot corner of the building to 13,000 square feet, with walls added one at a time. That left employees siloed in their own teams, restricting opportunities for collaboration.

“We needed everybody to be caught up in the energy, whether they worked together or not,” Mr. Monga said.

Channel Fusion went to work with Bill Knapp of Knapp Warden Architects on a new floor plan. Two principles guided the project: building energy and fostering collaboration. Mr. Monga wanted not only more open workspaces where employees would feel free to interact, but more light, and more spaces that encouraged and supported collaboration.

The project was done “slowly, purposefully, being very meticulous,” Mr. Monga recalled. That was partly because Channel Fusion wanted to get it right, but also because it wanted to continue offering seamless customer service.

In order to minimize disruption, one goal was to limit the relocations of employee workstations to just one move before the final move-in.

Walls were taken out to create an open office plan that maximized space and brought in more light. Private offices were given glass interior walls so that exterior light could pass through into the middle of the floorplate.

Decor choices for the renovation draw almost exclusively on input from employees, Mr. Monga said, and are still being added. Plans include a wall display featuring logos from all of the company’s clients, and another featuring photos of employee activities from the company’s history. The color scheme consists of varied shades of gray, accented by swatches of bright green that create a sense of energy and reflect the company’s logo.

When it was all done, Channel Fusion had three new collaboration areas with names like the Client Happiness Lab, the Fusion Idea Center and the Innovation Lab.

One of the best ideas to come out of the process was the creation of an employee break area that’s segmented into two spaces. One has been dubbed ‘Moe’s Lounge” and is designed like a small cocktail bar. The other section functions more like a traditional employee lounge with coffee, snacks and healthy foods section.

With the new lounge, just about everybody joins in for a drink or a snack, even if they can’t stay long. During client visits, Moe’s has also been a great place to wind down after a day of talking business and before going out for dinner. The lounge area also opens up to an employee gym.

Wall decorations are the last piece of the puzzle, understandably, and Channel Fusion isn’t rushing it.

“For 2020, we’re going to really go to town on our interior decoration,” Mr. Monga said.

The project took about five months longer than expected, in part because the long winter of 2018-2019 provided few opportunities for window installation. It’s been worth the wait, according to Mr. Monga, who gives landlord Craig Hotchkiss, CEO of Midwest Janitorial Service, much of the credit for the company’s steady growth in the building, including his flexibility in allowing the latest renovation.

Channel Fusion’s near-term plans for the facility include a project to virtually connect it with its Asia office in Chandigarh, India. The project will provide a video communication link  that will let the two teams see each other during the overlap window of their work day.

Mr. Monga said Channel Fusion is also investigating the possibility of expanding its employee lounge area with a balcony, and is planning to add a mini-library in its reception area devoted to customer satisfaction titles. It would be great if the company could develop an onsite child care facility, Mr. Monga said, although it’s not yet clear if that will be possible.

“Energy is something we’ve just got to keep building on,” he said. CBJ