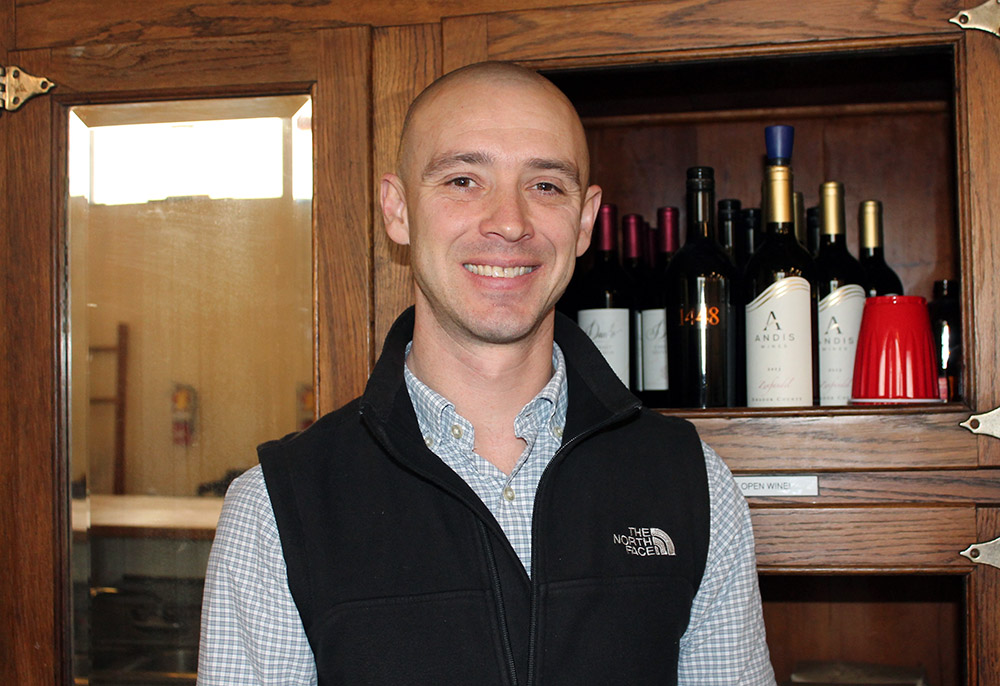 Tom Lutz calls the seven-month period since he introduced his Repour Wine Saver a “soft launch.” But during that time, the Cedar Rapids inventor and entrepreneur has sold nearly 200,000 units worldwide, attracted widespread industry acclaim and landed prime retail shelf space at more than 2,000 stores, including Brookstone locations from coast to coast.

It seems the world has been thirsting for his product, which promises to keep wine fresh weeks – and up to months – after a bottle is opened. And now that Mr. Lutz is finally rolling out his marketing strategy in earnest, his wine stopper is poised to make an even bigger splash.

Mr. Lutz and his newly hired national sales representative – a certified sommelier – have been on the road since November, taking Repour to trade shows, conventions and wherever else wine aficionados gather en masse. Discussions are now underway with wine clubs, wineries from industry giant Gallo on down and even representatives of the Rachel Ray empire.

“We’re kind of working through the challenge of how much inventory to build because there is a lot of interest,” said Mr. Lutz, adding there’s “a fine balance” between getting ahead of anticipated sales and carrying too much inventory. “Just as an example, one wine club could have 100,000 customers so if they decided in their July shipment, ‘We’d like to include a bonus four-pack to every customer,’ that’s 400,000 stoppers, and we’re obviously not scalable to that point today. But those are the kinds of conversations that we’re having, the numbers that just one customer could potentially drive.”

The Repour story began rather mundanely about three years ago when Mr. Lutz’s wife poured a half bottle of wine that had gone bad down the drain. An MBA and a scientist with a Ph.D. in physical chemistry, Mr. Lutz began thinking about the volume of wine that goes to waste due to oxidation spoilage and all of the contraptions – vacuum pump stoppers and the like – that did very little to preserve it beyond a day or so.

“Everyone tries to preserve wine by pushing air out of the way, but I thought, as a chemist, there’s got to be a [better] way of eliminating oxygen,” he said.

Putting his background in the consumer products industry to work, Mr. Lutz began experimenting at home. After some trial and error, he hit upon the idea of modifying techniques used in food industry packaging to keep meats and produce fresh for weeks on store shelves. The result was a stopper able to continuously remove oxygen from the air above the wine in the bottle, and from the wine itself, bringing the level of dissolved oxygen to less than 0.03 parts per million (ppm), no matter how many times a bottle is re-opened or how long it sits half-empty.

“The science has been around, but it’s never been tailored to the wine environment,” said Mr. Lutz, who spent a year developing Repour on his own before turning to the Entrepreneurial Development Center in Cedar Rapids for help with packaging, branding and “turning the product from this ugly prototype into the consumer product you see today.”

Working with the EDC and, later, the Iowa Economic Development Authority, Mr. Lutz solicited input from industry experts and subjected Repour to many more rounds of testing from wine pros, including sommeliers, vineyard owners and wine distributors.

“I had to be convinced it worked because I didn’t want to come out with a product that was just a gimmick,” he said. “There are too many of those already.”

A Kickstarter campaign in November 2016 caught the eye of Brookstone and other outlets as well as distributors in the UK, Netherlands and several other countries without Mr. Lutz having to do much in the way of marketing. In June 2017, he began selling the stoppers on his own website as well as on Amazon, where it was quickly named an “Amazon’s Choice” product and began garnering enthusiastic five-star reviews.

Repour’s credibility received a huge shot in the arm several months after launch when Master Sommelier Kevin Vogt, former sommelier for celebrity chef Emeril Lagasse, pronounced the product “brilliant” after product testing. Just this month, a second master sommelier, Will Costello, took to Facebook to rave about his experience with the stoppers.

“After testing out Repour since the beginning of December on some varying ages, qualities, sizes and overall doing a pretty scientific study. I can say, that these things F**KING ROCK,” wrote Mr. Costello, former wine director at the Mandarin Oriental in Las Vegas and current brand ambassador for Bien Nacido and Solomon Hills Estates. “They are so good, you actually hear the vacuum pulled on the bottle, like a brand new cork.”

Endorsements from connoisseurs like Mr. Vogt and Mr. Costello – two of only 236 to achieve the rank of master sommelier worldwide – are key to Mr. Lutz’s recently launched strategy of marketing directly to the wine industry in what he calls “a top-down approach,” aimed at getting opinion setters onboard with widespread adoption at the consumer level to follow. Among those testing Repour at the moment are wineries like Gallo – the largest producer of wine in the world – wine clubs, restaurants and bars.

“One problem we have is, if you walk by the box in the grocery store, a lot of people will see it as just another stopper,” Mr. Lutz said. “Locally, where people have read about it or heard about it, they understand this actually works. But take us out of context and pop us in Des Moines, and it’s hard getting past that perception it’s just a gimmick. So our strategy right now is to get the people who will really understand it and respect it on board first.”

Another part of the strategy is talking with culinary and lifestyle trendsetters who can introduce the Repour stopper to their audiences.

“We’re trying a little bit of the bottom-up approach by having it on Amazon, but really, it’s the top-down approach that people understand and respect,” he said. “So we’re talking to shows like Rachel Ray. That little vacuum stopper that we talked about? What blew it up in the ‘90s is that Oprah had it as one of her favorite things. That’s what bought awareness to the consumer of how it could benefit them – even though it doesn’t do a lot. … Our product works.”