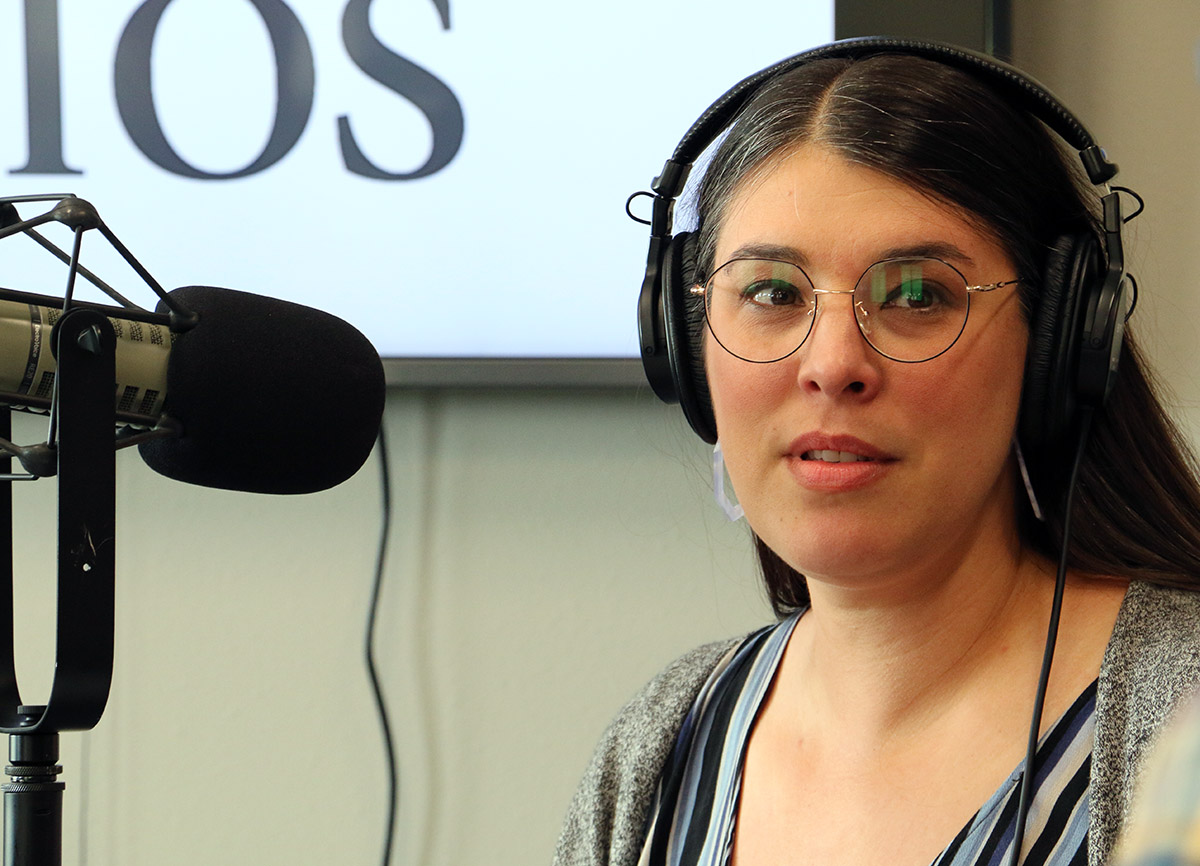 Katie Roche, chatting with Nate about the intersections of art and business during a recent recording session at CBJ Studios in North Liberty. PHOTO ADAM MOORE

As development director for Iowa City’s iconic Englert Theatre, Katie Roche is charged with the delicate task of balancing art and business. Her role is to build the means necessary to support the mission of the theatre — a critical task, considering no money means no commu­nity arts organization. Nothing, not even something as pure and idealistic as art, can escape the laws of economics, it seems.

What makes her so good at her job is that she understands this intuitively. An accomplished musician in her own right, she knows how to nurture artists and create big things while still working within financial constraints.

Now, Ms. Roche, along with other leaders in the Iowa City community, have embarked on their most ambitious fundraising endeavor to date: the Strengthen, Grow, Evolve campaign, which aims to make Iowa City “the Greatest Small City for the Arts.” Campaign leaders have set a goal of raising $6.5 million, which will go toward improvements at the Englert, a state-of-the-art cinema for FilmScene and dynamic, affordable arts programming for the Corridor.

Ms. Roche joined me at the CBJ Studios in North Lib­erty to discuss the intersections of art and business, her vision of the ideal creative time and what it will take to hit that $6 million goal.

I want to start with an existential question. As an artist, how do you view success in your life?

I think it has a lot to do with authenticity and finding the thing you want to make and add to the world. Sometimes it involves figuring out whose voice you also want to amplify and how you can do that with integrity.

You obviously do that work with the Englert Theatre, bringing in hundreds of acts a year. Talk a bit about your path to the organization and your role.

As an artist, I was surrounded by people who wanted to make their art happen, make their shows happen. And I always joke that my career started in a place where people were like turning to me, thinking I had the skills that I didn’t think I had. They would say, “We want to do this thing. How are we going to pay for it?” And then everyone would look at me, and I was like, “I don’t have any mon­ey. Why do you think I can do this?” But what they saw in me before I saw it in myself was that I could look at these systems and look at the environment and figure out how to connect people to make things happen. And as I started to do that work, I realized I really enjoyed … my work as a fundraiser, my work as an event organizer.

I really got my feet wet in college. I helped to organize a solar-powered music festival. We towed solar and had a biodiesel bus and used it to promote alternative energy. It allowed me to learn on the run and make great mistakes.

What jobs did you have while you were in school?

So, my friends and I started organizing … basically rent parties back in the day, which were some of the first shows I produced. Very illegal, where we were having multiple bands playing in our basement. And this amazing thing happened, where this collective of people that I lived with, we sort of loosely called our house the House of Love. And then there was also a drag house called the House of Love. And people were going to the wrong parties. One day these beautiful drag queens showed up at our door and said, “We are the House of Love. Who are you guys? We keep having all these little punk hippie kids stop at our house.” And I said, “We keep having drag queens show up here!”

We were all charging covers. We were trying to create an in­tentional community around art. We were making food — the Red Avocado was one of the restaurants that came out of that space. We were all just really trying to empower each other to figure out what we wanted to do in the world. It was a really cool time.

Read the full interview with Katie Roche in the July 1 print or digital editions of the CBJ. Not a CBJ member? Join today.