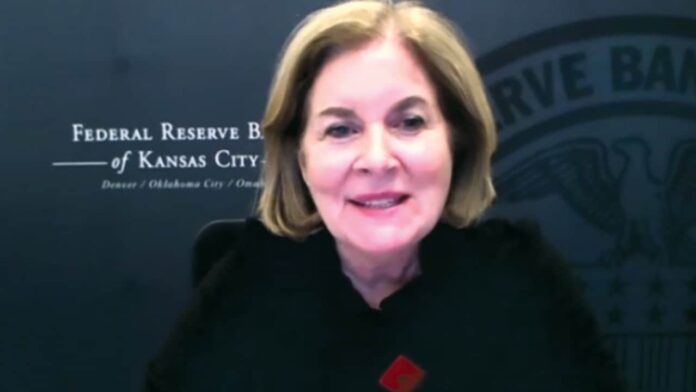 For Esther George, president and CEO of the Federal Reserve Bank of Kansas City, the sound of live and in-person applause at the CBJ’s Mid-Year Economic Review was an apt reflection of the “progress that the country’s making in addressing the pandemic” and the fledgling recovery it has spurred.

Ms. George, the keynote speaker at the June 22 event attended by 165 in-person guests as well as virtually, had good news to share about an economy that has rebounded rapidly over the past six months. The GDP gap – “one of the broadest measures of output in our nation’s economy” – has narrowed to 6.5% and is expected to continue improving. Unemployment has fallen from an apex of 17% nationally in April 2020 to below 6%. And American savings accounts have ballooned thanks to three rounds of federal stimulus, enhanced federal unemployment benefits and pandemic-induced wariness that encouraged saving.

“But I think we always have to remember, this economy is not yet fully healed,” cautioned Ms. George, who leads a workforce of more than 2,000 at the Kansas City Fed and branch offices in Denver, Oklahoma City and Omaha, as well as serving on the Federal Open Market Committee, charged with setting U.S. monetary policy. “Its progress right now is uneven. When we look at how many people are still unemployed, some 7 million people are still not back in the workforce, notwithstanding the fact that we have a record number of job openings and reported labor shortages.”

According to Ms. George, she and her Fed colleagues will be focused on three main questions over the next six months to assess the strength of the economic comeback and to chart appropriate fiscal policy: How actively will consumers spend down the excess savings they’ve accumulated during the pandemic? How will supply constraints and bottlenecks impact demand and the urge to spend? And are inflationary pressures created by demand colliding with production constraints a temporary hiccup or a sign of things to come?

“Looking through the rest of the year, I think we will see progress in the labor market continuing to heal and growth coming forward,” said Ms. George, adding that monetary policy and fiscal transfers from the federal government to average Americans have helped make “household balance sheets look pretty good today, [with] an accumulation of savings far in excess of what we would normally see. In fact, the outlook at this point is so strong that we quit focusing so much on whether there will be sufficient demand and are now turning our attention to supply constraints.”

How – and when – will consumers spend their savings?

The Fed is carefully monitoring household spending, which Ms. George called “the real driver of the U.S. economy.” Though many Americans continue to struggle financially because of the crisis, “when you roll it all up … households clearly have the capacity to spend. The question of if, and how quickly, will they spend down that excess savings is going to be an important determinant of the pace of growth over the next few years.”

Americans saved an additional $1.5 trillion over normal rates during the pandemic, representing huge potential for a spending surge. But that might not happen for several reasons, Ms. George said. For one, Americans have become painfully aware of unexpected economic risks that could come their way.

“Things like a pandemic weren’t in any of our sights two years ago,” she said. “Now, I think people are beginning to think, ‘what happens when an unexpected shock comes my way,’ and how valuable having a cushion of savings could be to them going forward.”

A second mitigating factor is that “fiscal transfers” in the form of assistance and stimulus from the federal government to consumers are winding down.

“People understand that these fiscal transfers are going to be short-lived, it isn’t going to be a permanent part of their income,” Ms. George said. “And they may be thinking at this point, ‘that is going to change and maybe I will hang on to this money, as I think about my spending ahead.’ So that’s a question that we will simply have to watch unfold over the course of this year.”

Evidence is mounting that supply constraints, from labor issues to transportation and materials shortages, are creating significant economic drag – one that could suppress any new outpouring of consumer demand.

The most visible shortages surround the workforce and a labor participation rate that still lags well behind pre-pandemic levels. Iowa Workforce Development last week announced a May participation rate of 66.4%, up slightly from 66.1% in April but well off the 70.1% reported in May 2019. The sluggishness persists despite a historic number of job openings that have forced many companies to raise wages and offer bonuses, and prompted some governors, including Iowa’s Kim Reynolds, to call an early end to enhanced unemployment benefits.

“People are surprised when we have a record number of job openings today, that we are not seeing people rush back into the workforce,” Ms. George said. “At one level, it just takes a while for millions of people to transition from staying at home to getting back into the workforce, so we’ll watch that. But I think there are some other factors that have been holding people back or even causing them to drop out of the labor force.”

Part of the reluctance to return, she said, is pandemic related. Some have opted to take semi-permanent leaves to care for children or family members. Enhanced unemployment benefits have played a role. And some workers may never return, opting for early retirements.

Ms. George is confident that given the uptake in COVID-19 vaccinations and the end of federal extended unemployment benefits in September, many workers will be back.

“But it’s possible that some of the decline in participation reflects a growing detachment from work, especially after this the disruptions that we saw over the past year,” she said. “And that can just take time for people to overcome and get back into working.”

Material shortages and transportation log jams also threaten a full recovery, although Ms. George expects to see both begin to resolve themselves in the next six months. Some constraints could persist, however.

“For example, we saw the shift in demand from services to goods during the pandemic, meaning we couldn’t go out and travel, we couldn’t go out and eat and do some of those things, so people began to ramp up their consumption of goods, ordering things online,” she said, adding that led to a surge in imports, a backup at U.S. ports, long shipping times and a global shortage of intermodal containers.

“A shift in consumption patterns, back to services, and the fact that we can now spend our money on going out and traveling again, may alleviate some of those delays because we won’t be buying as many goods,” she said. “But it’s not yet clear when that will occur and by how much. If you’re a manufacturer, surging demand for things like computer chips has certainly run up against global capacity constraints, which of course, requires long lead times to get more production and expansion for that resource.”

In addition to consumer spending and supply constraints, Ms. George said she would be keeping an eagle eye on inflation, which crept up to 5% in May – rising at the fastest pace in a decade.

Contrasted against the 1.5% it hovered around in January 2020 just prior to the pandemic, “what the current pace of inflation means for the outlook over the next few months is less than clear,” Ms. George said. “It is a bit of a muddled picture, given the dynamics I just talked about.”

Ms. George said she agrees with most of her Fed colleagues that some of the factors spiking inflation are likely to be temporary and fade with time. But she is not convinced all inflationary pressures will dissipate.

On one hand, rising gas prices are an example of a metric not to get overly concerned about. After falling to $1.87 a gallon as the pandemic pushed demand down and inventories began to build, prices have risen almost 60% to an average of $2.99 a gallon.

“But if you look at the price level overall for gas, it’s about equal to the average price over the past 10 years,” she said, chalking it up to a “normalization” that comes from a supply and demand adjustment.

Ms. George said there is room for similar adjustment in pandemic-ravaged industries such as air travel and hospitality as the economy reopens, with “continued scope for further price increases as they try to get back to a place they were before the pandemic.”

But that doesn’t tell the whole story, and Ms. George expressed concern about industries where high demand through the pandemic and beyond are colliding with supply disruptions, sending prices soaring.

“This has been particularly true when you look at automobiles where production disruptions have contributed to higher new car prices, and that has spilled over to used car and rental car prices,” she said. “In fact, if you’re doing any traveling somewhere and have to rent a car, you will see that those prices have increased more than 100% over last year.”

While painful supply bottlenecks should continue to ease, Ms. George acknowledges there is potential for persistent inflation.

“Over the long term, we know that the outlook for inflation is going to be influenced by demand that stays sufficiently strong across a wide range of goods and services that it pushes the economy up against its productive capacity,” she said.  “As we watch the economy getting back to its more normal footing, it’s hard to distinguish between a string of these seemingly one-off bottlenecks and a broader-based lack of capacity.”

Financial markets are already pricing in higher inflation, but Ms. George said only time will tell.

“You will not find me dismissing today’s pricing signals or being too reliant on the fact that we have not had to be concerned about price inflation over the past decade,” she said.