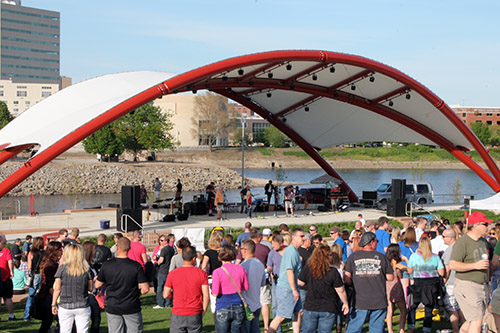 Residents take in a show at the McGrath Amphitheater during a 2015 edition of Uptown Friday Nights in downtown Cedar Rapids. The amphitheater is one of several local amenities with the ability to draw in visitors, a recent study found.

Consultants have completed the research phase of a major study of the Cedar Rapids travel market, uncovering new opportunities for the area’s tourism economy.

The Cedar Rapids metro travel market had about 3,000 hotel and motel rooms and an overall occupancy rate of 59 percent in 2015, according to Young Strategies of Charlotte, North Carolina, and Destination Services of Saint Charles, Missouri, which performed the study for the Cedar Rapids Area Convention and Visitors Bureau (CRACVB).

While the occupancy ratio leaves about 1,200 rooms empty on an average night, seasonal occupancy rates vary widely, the consultants found. Between January and April, when family travel is at a minimum because children are in school, weekend occupancies plummet and lodging properties need help filling rooms.

About 66 percent of all travel to the market consists of adults without children. They are looking for things to do during the colder weather months – particularly things they haven’t done before, the consultants said.

“What really resonated during our research was unique, local and engaging experiences,” said Berkeley Young, president of Young Strategies. He said surveys showed high demand for outdoor activities, river access and evening entertainment. Unique local foods and shopping experiences, such as locally made art or decorative crafts, were consistently rated in high demand.

“Local food has destination appeal,” Mr. Young said. “If you can’t do farm-to-table in Iowa, where can you do it? People want a meal that’s grown here.”

Nightlife attractions have a strong appeal to both leisure and business travelers, Mr. Young said, adding they don’t have to be loud or flashy.

“It could be a quirky restaurant,” he said.

Initial findings were released March 3 to tourism industry leaders and stakeholders, including the CRACVB board. The report covered findings of the data-gathering stage of the study, which went from November 2015 through February.

The percentage of tourists, while only a quarter of all room nights, is a strong number for a metro area the size of Cedar Rapids, Mr. Young said.

The consultants identified what they consider to be strengths in the local travel market:

CRACVB CEO Aaron McCreight said the bureau hopes to engage not only lodging and hospitality properties, but the entire community in selling the community to visitors.

“We need our community to brag a little bit, and in the surveys, they’re willing to do that,” Mr. McCreight said. “That’s what the research shows.”

The research findings are already being put to use in developing a marketing campaign for the summer travel months ahead, he added.

The research effort included partnerships with the MedQuarter, Brucemore and 16 other local organizations, each of which provided access to their visitor databases in order to distribute surveys. More than 1,000 responses were received. In addition, nearly 1,000 local residents and 142 community and business leaders were surveyed.

A key message from the consultants is that a healthy travel industry means a stronger local economy.