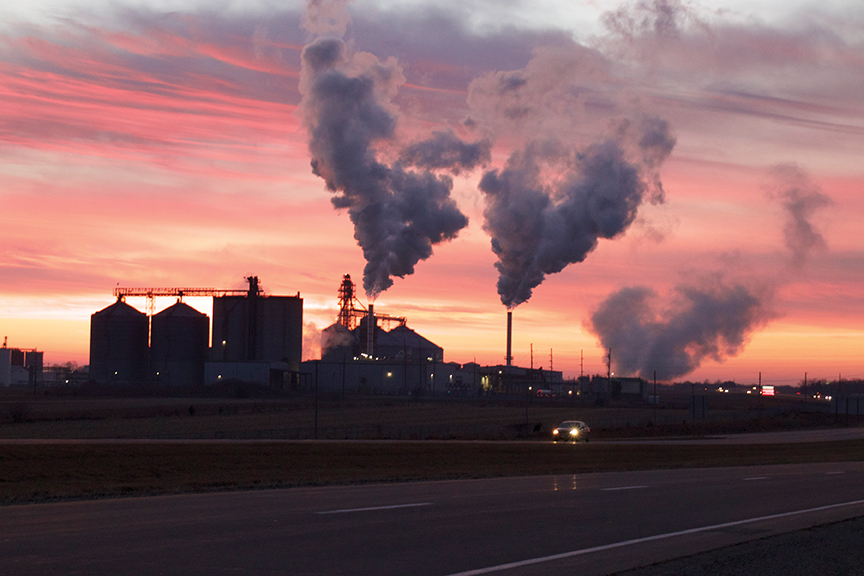 Trade partner opens doors to fuel oxygenate made from corn-based ethanol, such as the product made at the Big River Resources plant in West Burlington, shown above on a recent night. PHOTO EMERY STYRON

“At a time trade relationships are strained across the board, it’s nice to have one that’s going well,” said Iowa State University ag economist Chad Hart of April’s announcement that Japan would open its market to exports of the oxygenate ETBE, made from corn-based ethanol.

Ethanol exports have become “extremely important to Iowa farmers’ profitability,” notes the U.S. Grains Council. The potential to sell up to 95.5 million more gallons of corn ethanol per year is especially welcome as China targets the U.S. ag economy with retaliatory tariffs on products including pork and soybeans.

The Grains Council, comprised of corn, sorghum and barley producers and major agribusinesses, has been working to increase demand for U.S. ethanol exports by strategically focusing on their environmental benefits, including reducing greenhouse gas emissions. That was a selling point for Japan, which introduced ethyl tertiary-butyl ether (ETBE) blended gasoline in 2008 as part of its commitment to cut greenhouse gas emissions under the Kyoto Protocol.

Previously, only sugarcane-based ethanol was allowed for the production of ETBE, according to a joint news release from the U.S. Grains Council, the Renewable Fuels Association and Growth Energy, a biofuel trade group.

Japan’s new policy calls for an increase in the carbon intensity reduction requirements of ethanol used to make ETBE, and recognizes corn-based, U.S.-produced ethanol’s ability to meet that goal, even with the higher greenhouse gas (GHG) reduction standard.

It’s too early to predict the potential dollar value of the policy change to U.S. farmers and ethanol producers, Mr. Hart said.

“It depends how long it takes to ramp that up and which markets they turn to,” he added.

The small amount of ethanol the U.S. currently exports to Japan goes for industrial and other uses, not for fuel, said Iowa Corn Growers Association spokesperson Lisa Cassady. The ramp-up of exports will take some time as the Grains Council works through various issues with Japan, she said: “It’s not like opening a spigot.”

Cargoes of sugarcane-based ETBE from Brazil are already booked for the 2018-2019 crop, according to a Platts report for S&P Global, so the changes will not affect exports from that country until the following year.

One of those issues Japan will have to deal with is probably infrastructure, Mr. Hart noted.

“Ethanol is a good fuel, but it’s an even better solvent,” he said. “They’re not going to be able to put this in a pipeline. They’re going to have to truck it.”

“Japanese consumers will now have access to cleaner, cheaper, American high-octane fuels. We look forward to beginning a dialogue on how Japan’s new policy could be improved, such as moving toward direct blending, rather than having to convert our ethanol into an ether like ETBE,” he said.

The Japanese market for U.S. ethanol could hold up for some time, Mr. Hart said, but perhaps not indefinitely if electric cars come to dominate the market there. The Japanese government has convened a 15-member panel representing Honda, Toyota, Nissan, Mazda and other manufacturers to discuss ways of strengthening competitiveness in the automobile industry and promoting wider use of next-generation models, including electrics, according to Japan News.

“Electric cars are still a novelty,” Mr. Hart said, noting their higher initial cost and limited range. “It’s going to take quite a while for that to turn over.”

Meanwhile in Iowa, corn farmers and ethanol producers are pleased to find another outlet for their products.

The change in Japan’s policy, which the Grains Council has long worked for “has important consequences” for rural Midwest communities, he said. “When the farmer makes more money, he will spend it.”

“Japan has been a good trading customer for us for the last 50 years. With uncertainty in other markets, it’s good to have one that is tied up,” he said.

Another benefit is the opportunity to use up the surplus from last year’s bumper crop, Mr. Hora added.

“There’s a lot of corn around and we have to find places to use it.”