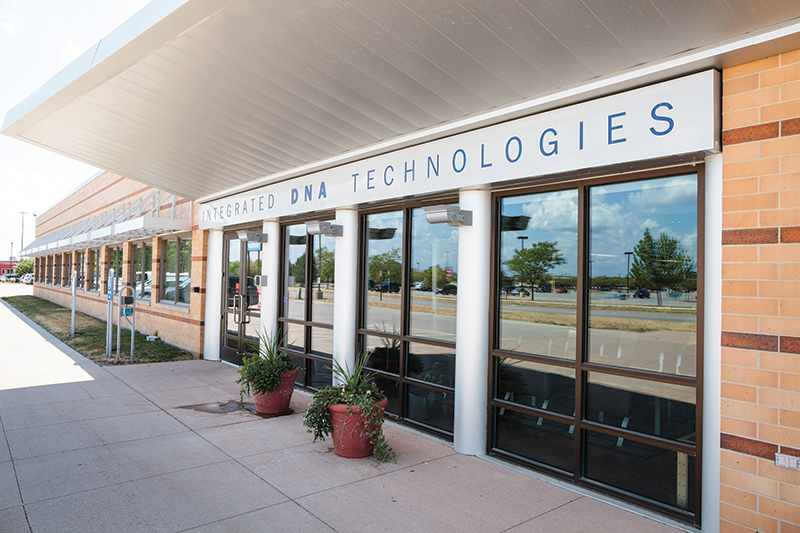 The purchase price for Coralville-based Integrated DNA Technologies, disclosed by Danaher Corp. more than a month after its acquisition was announced, underscores the company’s strong prospects as a leading supplier of oligonucleotides worldwide.

Danaher is a publicly traded Fortune 500 company based in Washington, D.C. The deal had been announced on March 9 without a price, and was finalized during the week of April 8.

During the call, Mr. Joyce praised IDT’s double-digit revenue growth over a sustained period of years and “attractive” profit margins.

“Just for context, the genomics reagent market is about a $3 billion market, growing [by] double digits with some great secular growth drivers around,” he said, mentioning next-gen sequencing, gene editing and qPCR (quantitative polymerase chain reaction) technology as a few of those drivers. He said growth is also expected to come from synthetic biology.

Under the leadership of founder Joseph Walder, IDT has built a market leadership position around quality and turnaround times, Mr. Joyce said, leading to “tremendous” brand identity. He pointed to the company’s high Net Promoter Scores, a proprietary measure of customer experience that is used to predict business growth.

IDT’s scores “were probably as high as any Net Promoter Scores I’ve seen in a newly acquired business in a long time,” Mr. Joyce said.

Trey Martin, president of Integrated DNA Technologies, is a board member with the Iowa City Area Development (ICAD) Group. Mark Nolte, president of ICAD Group, said Mr. Martin is advising ICAD on the deal’s timing and protocol as it takes the first steps toward building a relationship with Danaher Corp. A visit to Danaher’s headquarters is already in the early planning stages.

“We’ll do anything we can to keep them strong and growing,” Mr. Nolte said.

The quality of the Danaher-IDT deal, including the $2 billion pricetag, will become an important part of local startup lore, Mr. Nolte added, noting that it is a University of Iowa spinout that used intellectual property licensed from the UI and has remained loyal to the area where it started, resisting repeated calls to relocate to larger tech hubs.

“They showed you can do it here in Iowa,” Mr. Nolte said. “This is the long tale of why we advocate for building a startup community. The jobs and wealth created are unbelievable. It’s a testament to how hard they worked – the staff and the entire management team.”

Although the company is no longer independent, the proceeds from the sale could stimulate the local economy.

“When wealth like this is created, it cycles back through the local economy through things like new business ventures and philanthropic activity,” Mr. Nolte said.

Now part of Danaher’s Life Sciences business platform, IDT is continuing to operate under its longtime brand. About 75 percent of IDT’s sales are in North America, Mr. Joyce noted.

“We think there are opportunities for us to add incremental value here [to IDT],” he said, mentioning expansion to new geographic markets, operational improvements and overall business growth.

It remains unclear exactly how many stakeholders will benefit from IDT’s sale. The company has taken in outside investors to fund its growth over the years, although Mr. Walder remained the majority stakeholder when Summit Partners, a growth equity investor, announced it was taking a minority stake in the company in 2014. He remains the company’s leader and is also an adjunct faculty member at the UI, where he long served as a professor of biochemistry.

Danaher is a diversified operator of technology-based companies, with divisions addressing the dental, environmental, medical diagnostics and life sciences markets.

For the first quarter, Danaher reported its sales were up 11.5 percent from the first quarter of fiscal 2017 to $4.7 billion, and net earnings per share were up 16.5 percent in the same period to 99 cents. The company generated $691 million of free cash flow, resulting in more than 70 percent growth year-over-year.