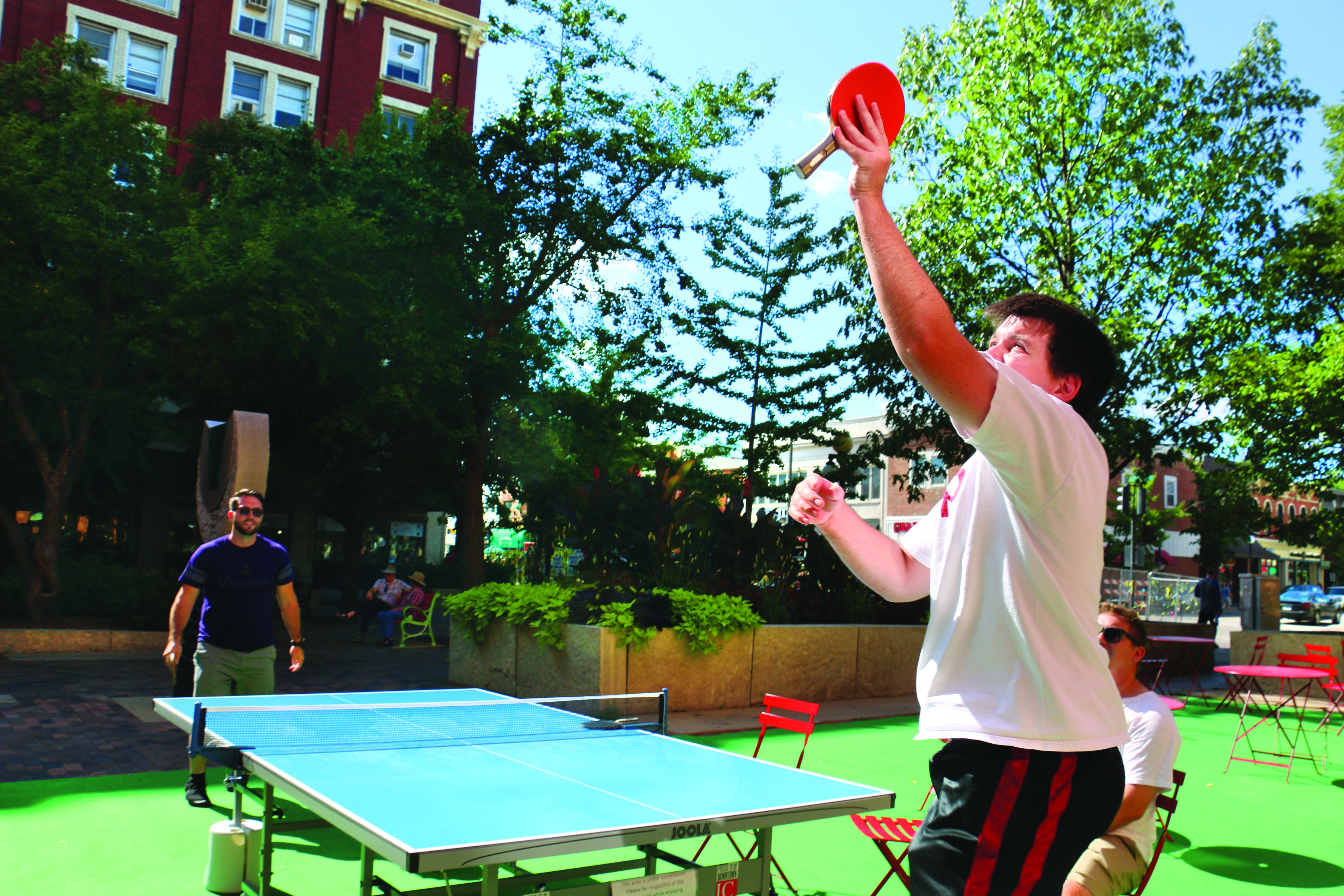 Visitors at the Iowa City Pedestrian Mall play a round of pingpong at a table set up last summer by the Iowa City Downtown District. The tables were a part of “Open Washington,” one of several campaigns led by the ICDD. PHOTO/CHASE CASTLE

The Iowa City Downtown District plans to hire a “nighttime mayor” to support establishments that do most of their business after-hours, and is restructuring the retail development position previously held by Nate Kaeding.

The ICDD represents about 150 businesses, property owners and organizations, including dozens of restaurants, bars and multiple performance venues.

In addition to a desire to bring more events downtown, Executive Director Nancy Bird said the nighttime mayor position will address what she describes as an outdated perception that the district only appeals to college students.

“We are finding that people who have not been downtown in several years have not experienced the positive changes made by our businesses since the 21-only ordinance or the growth of local and university cultural programming,” Ms. Bird said in a press release. “They still think of downtown Iowa City as it was 10 years ago. It’s a huge disconnect.”

Inspired by the proliferation of “night mayors” in Europe, the position could also help bridge a disconnect between revelers, downtown’s residents and public officials.

In Amsterdam, for example, which is credited with pioneering the concept that’s since been replicated in Paris, Zurich and elsewhere, the city’s night mayor helped implement a campaign telling patrons to “stay classy, think neighbors, drink inside, use a bathroom,” according to The Guardian.

A similar campaign could appeal to downtown residents such as Roger Knight, Jr., who spoke before the Iowa City Council last week to express concerns about issues like public urination and nudity downtown.

“As of right now, the downtown in the evening time has got a lot of issues with policing, and to bring in someone who is a nighttime mayor should know what the problems are,” Mr. Knight said.

Ms. Bird said the district does not have a timeline for hiring a nighttime mayor, which may be part- or full-time depending on the experience and availability of the chosen candidate.

As the ICDD seeks applicants for a nighttime mayor, the district also is revising its retail development coordinator position, which until recently was held by Nate Kaeding.

In addition to working with the district, Mr. Kaeding is a former co-owner of the downtown pub Short’s Burger and Shine, as well as Tailgate Clothing, a college apparel shop purchased by American Eagle Outfitters in 2015. Presently, Mr. Kaeding co-owns Pullman Bar & Diner and the new Big Grove Brewery on South Gilbert Street, which will be the Solon-based brewery’s second location when it opens its doors this month.

“He has a number of other endeavors going on that kind of limit his number of hours with the district,” Ms. Bird said. “So that’s changing, but he’s a valuable team member and helping with a number of ongoing projects this year.”

As of last week, Ms. Bird said the district was negotiating a contract with Mr. Kaeding specific to the CoSign program, a national initiative that pairs local artists and signmakers with area businesses to create unique, customized signs. Locally, the program is being facilitated through the ICDD.

Mr. Kaeding joined the district in April 2015, signing a three-year contract for the position aimed at expanding and recruiting retailers. The contract included provisions that barred Mr. Kaeding from acquiring new property within the downtown district. Those provisions are meant to prevent conflicts of interest regarding the use of proceeds from the area’s self-supported municipal improvement district, or SSMID, wherein commercial property owners self-impose taxes used to support the ICDD and related initiatives.

“There is stuff now on the horizon that’s come about that I wanted to be more involved in,” Mr. Kaeding said. “And the role that I previously had restricted me from doing that.”

Ms. Bird said the district may revive the retail development coordinator job later this year, which could include neighborhood-specific branding initiatives and other projects. That position, too, may be offered full- or part-time.

“So we are going to be exploring the next step for our retail director and reposition some of the tasks he was doing,” Ms. Bird said.