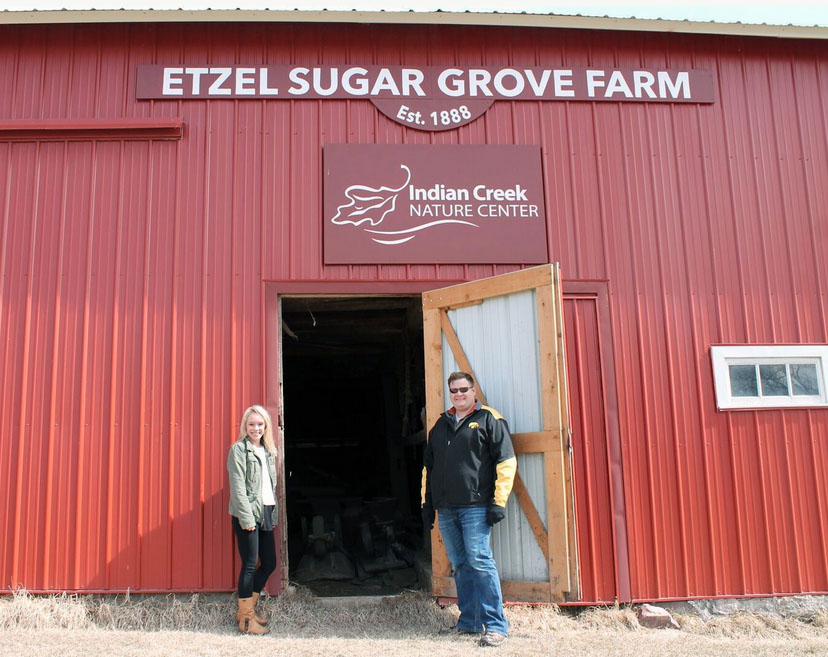 Elyse Robinson and John Myers of the Indian Creek Nature Center show off the barn at Etzel Sugar Grove Farm, which will be guided by a 14-member Farm Committee. PHOTO DAVE DEWITTE

Etzel Sugar Grove Farm in northern Linn County has been farmed by five generations of Etzels, but this year it’s awak­ening from its winter slumber with a new future before it.

After receiving the idyllic 190-acre farm as a gift in 2016, Indian Creek Nature Center announced plans last month to transform it into a demonstration center for practices that curtail topsoil loss, increase pollinator habitat, reduce agricultural runoff into streams and elim­inate reliance on chemical inputs.

It’s a lofty goal for an organization that until now has focused more on environmental education, but to Execu­tive Director John Myers, the stakes make it worthwhile.

Under conventional rowcropping practices that re­quire lots of chemical inputs and tillage, Mr. Myers says half of Iowa’s topsoil has eroded away in the past 100 years. Strains of weeds resistant to herbicides and insects resistant to pesticides have begun to emerge as the use of chemicals increased. The low water quality of Iowa’s streams and lakes has become a stigma for the state, forc­ing municipalities to use more chemicals to treat water supplies in some areas.

“We live in Iowa, and the two biggest sustainability issues for us have been food and agriculture,” Mr. Myers said.

In fact, Iowa, a state once made up mostly of prairie, has become a place where few residents have ever seen a na­tive prairie stand. Because of its rich, well-drained soils, it’s one of most intensively cultivated places in the world. According to the Iowa State University Extension Office, 26 million of the state’s 36 mil­lion acres of land area are now cultivated. Many more are in other agricultural uses such as pasture or feedlots.

Etzel’s Sugar Grove Farm will showcase permaculture, or the planting of a multitude of different perennial species that come up year after year, requiring little or no tillage and replanting. The production methods will be organic, relying on manure and com­posted materials for fertilizer, and avoiding chemical fertilizers, pesticides or herbicides.

The strategy has already generated some solid financial backing, which will be critical to the project’s success. Corri­dor-based Frontier Natural Products Co-op, a longtime maker and distributor of organic products, donated a $150,000 lead gift to kick off a $500,000 funding campaign for the project’s initial phase.

After last month’s big announcement, global nonprofit 1% for the Planet wel­comed the project as one of its partners following a visit to the nature center by founders Yvon Chouinard and Craig Mat­thews. Businesses pledging 1 percent of their revenues to the organization have so far raised more than $175 million for groups the organization seeks out.

In an interview, Mr. Chouinard said he prefers to partner with groups that are unafraid to challenge the status quo and able to withstand the friction they some­times generate.

Regenerative agricultural methods such as permaculture take more carbon dioxide – the gas most responsible for cli­mate change – out of the atmosphere than they create and build more topsoil than they use, Mr. Chouinard said.

“Nature doesn’t waste anything,” Mr. Chouinard said, noting that a teaspoon full of soil can contain hundreds of millions of microorganisms. He said his own compa­ny, outdoor apparel maker Patagonia Inc., is beginning work with its cotton suppliers on regenerative agriculture methods. He is also studying the creation of a nonprofit to instruct and set up young farmers in small-scale regenerative agriculture so they can later buy their own farms.

“If Sugar Grove is successful, it will eventually be self-sustaining,” Mr. Myers said on a recent tour of the farm. “Be­cause if it’s not self-sustaining for us, it won’t help everyday farmers who need to make a profit.”

Mr. Myers is confident it can be done. The farm will produce about 50 different organic crops, which will then be targeted for distribution through retail and restau­rant outlets on a commercial scale.

The Frontier Co-op donation enabled the nature center to hire the farm’s first manager, Zach D’Amico, who has appren­ticed on other organic farms. With his ar­rival this spring, Mr. Myers said the trans­formation will begin.

A flock of free-range chickens and a herd of goats will be used to devour over­growth and invasive species in the wood and pasture lands of the farm, while the chickens will produce eggs for sale and manure for fertilizer.

Much of the work for the year ahead will revolve around building foundations for the farm’s future. A one-acre wetland will be excavated to detain surface water runoff from the farm before it reaches nearby Otter Creek, allowing sediment to settle out and remain on the farmland. Data will be col­lected on the current topsoil depth and water quality on the farm to set a baseline against which to track future improvements.

The nature center views farmers – both the traditional sort and those using regenerative farming methods – as its allies and partners in the effort. Farmers using conventional farming methods can help the nature center understand what their needs and limitations are, Mr. Myers said, while those with experience in restorative agriculture can share what they’ve learned.

An impressive list of institutional partners are backing the project with technical support and advice. They include Iowa State University, Hertz Farm Management, Feed Iowa First and the Sustainable Iowa Land Trust. The Univer­sity of Iowa and Mount Mercy University will provide water quality testing in Otter Creek.

As the project moves forward, Mr. Myers said the nature center plans to produce on about 80 acres of cropland. The farm has an­other 80 acres of timber, 20 acres of pasture and 10 acres of farmstead. About 72 of those will be available for partnering organizations to demonstrate sustainable practices.

The Etzel Sugar Grove Farm was donated to the nature center in 2016 after a series of discus­sions with owner George Etzel and his attorney in 2015 that extended over six months.

Mr. Etzel, who is in his eighties, was no lon­ger able to farm the land and did not have heirs who could take it over. The conversations be­came about alignment of goals and the future care for the farm.

“He did not want it to be developed, com­mercially or as housing,” Mr. Myers said. “That was his main concern.”

The veteran farmer also wanted the farm to be a leader for the future of agriculture. A vi­sion for demonstrating sustainable agriculture coalesced around Mr. Etzel’s generous gift, Mr. Myers said, with the nature center agreeing to keep the property as a farm in perpetuity.

Mr. Myers considers the project a logical extension of the nature center’s mission to promote sustainability. He sees the farm as a demonstration center that could draw interna­tional visitors and have worldwide influence.

“Having an impact in the Corridor is good, but we’ve got to think beyond that,” he said. “We need to do things here in Iowa that have a global impact.”

The fundraising campaign is already more than halfway to its $500,000 goal, Mr. Myers said. What exactly will come out of the ground at the farm hasn’t been decided, but there could be some surprises.

“We’ve had requests to grow lavender,” Mr. Myers said. “There is a strong demand for that and other botanicals.” He said berry crops such as aronia berries are also in high de­mand, at prices which could make them very profitable.