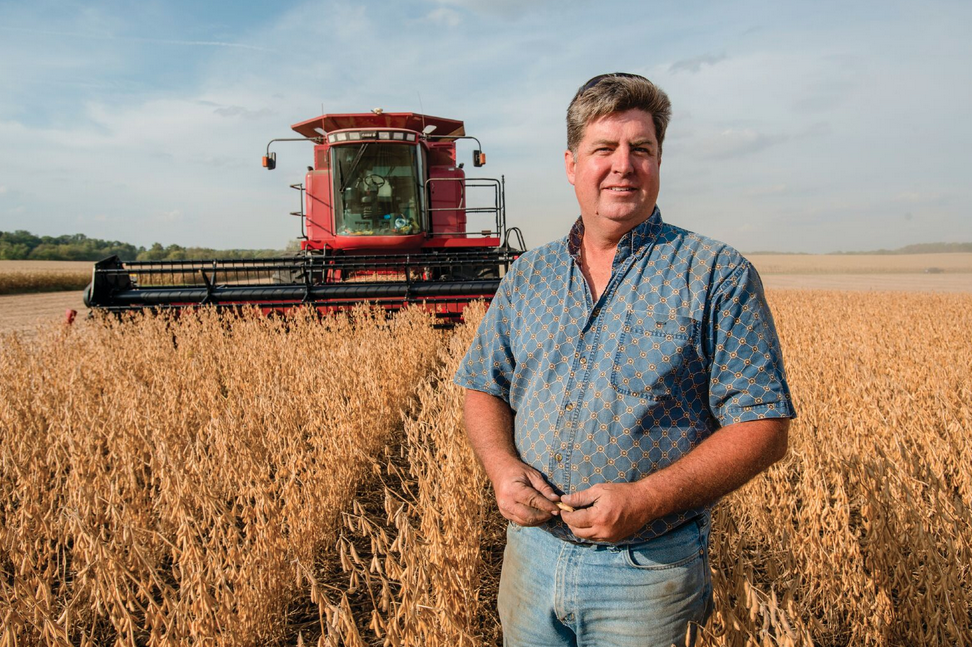 Farmer Dave Walton, of Walton Farms, shown in a Cedar County field last October. “For us personally, any sort of trade war would be a hugely negative impact on our bottom line,” Mr. Walton said. PHOTO JOSEPH MURPHY/IOWA SOYBEAN ASSOCIATION

Eastern Iowa farmers say they are worried that new tariffs on imported steel and alumi­num could end up costing them.

Steel and aluminum workers across the U.S. praised Mr. Trump’s move while Iowa’s agriculture industry braced for retaliation – a prospect that became more real following an April 2 announcement by China that the country would levy $3 billion in new tariffs on select U.S. exports, including pork.

“The president’s tariffs on imported steel and aluminum could put our ag exports at risk of retaliatory action by our trading part­ners,” Iowa Agriculture Secretary Mike Naig told the CBJ. “Exports are a vitally import­ant market for our ag products. Iowa farmers have been dealing with a challenging eco­nomic climate for several years and we need to be doing everything we can to protect and build markets for our agricultural products.”

Some farmers have several export-depen­dent crops at stake. Dave Walton is one – his Walton Farms has more than 800 acres of corn, soybeans, hay and pasture, and raises cattle and sheep, primarily in Cedar County.

“For us personally, any sort of trade war would be a hugely negative impact on our bottom line,” Mr. Walton said. “I’d say in our mid-sized operation, we can lose $20,000 worth of value on soybeans and probably an equivalent amount on corn.”

Iowa hog farmers probably have the most at stake in any trade-war situation, he added. The state is the nation’s leader in pork pro­duction, producing nearly a third of nation’s hogs, according to the Iowa Pork Producers Association, while China remains the world’s largest importer of pork, despite rising do­mestic production.

U.S. pork exports hit nearly $6.5 billion in 2017, up 9 percent over 2016 and marking the second highest level on record, the USDA reported in January.

“There’s a tremendous amount of pork from Iowa that goes to China, but I’d also say any destruction in those trade routes is going to have an effect in the meat trade,” Mr. Walton said. “It’s definitely something that’s in the forefront of our mind right now.”

U.S. Rep. Steve King, who represents most of western Iowa in the U.S. House of Repre­sentatives, was quoted as saying Trump’s tar­iffs could lead to a dip in the farm economy not seen since the 1980s.

“While I didn’t hear Rep. King’s com­ments first-hand, I assume he is referring to the Russian grain embargo implemented by President Carter,” said Todd Wiley, manag­ing partner of Vinton-based Interstate Swine LLC. “That embargo was a contributing fac­tor to the ag crisis endured by farmers and rural America during the 1980s.”

Tariffs could push back a lot of gains Iowa farmers have made since then, he said, not­ing that pork producers “have worked for decades” to gain fair access to consumers worldwide. Mr. Wiley added that any inter­ruption in producers’ ability to deliver pork products to their existing customers could be “devastating,” and that the toll could easily spread beyond the farm community to build­ings, machinery and more.

“I was reminded just yesterday from a non-farmer that the farm crisis of the 1980s impacted more than farmers,” he said. “Those who lived through that time period would prefer not to endure it again.”

Sean and Sara Dolan own a 600-sow far­row-to-wean unit in southern Buchanan County. Mr. Dolan and his brother, Mark, finish out the pigs from the sow unit and purchase additional wean piglets to fill two other finisher sites.

The operation sells roughly 22,000 market weight hogs a year to Tyson Food and JBS Foods plants. Mr. Dolan and his brother also produce about 400 acres of corn and 200 acres of soybeans annually.

He said the tariffs seem to be aimed primarily at China, but he doesn’t foresee the country retaliating harshly against the U.S. pork industry.

“We produce a food commodity that China needs; in addition, a Chinese company wholly owns the largest pork producer and pork processor in the U.S. [Smithfield Foods],” he said. “I don’t see China raising tariffs a lot on pork products.”

In fact, his biggest concern for the pork industry is that the tariffs are coming at a time of expansion, with three more packing plants set to open in the next two years. “Somebody is going to have to purchase this pork, and we need all the help we can get from exports,” Mr. Dolan said. “Pigs are not like corn, soybeans, and wheat, where you can store them in bins and wait for better prices. When pigs reach the desired market weight, they need to be sold.”

If there’s one U.S. commodity that Mr. Dolan sees as particularly vulnerable to any tariff fallout, it’s soybeans.

China currently imports 60 percent of the soybeans traded worldwide, but is increasing its purchases from Brazil. The South American country supplied for more than 53 percent of China’s total purchases in 2017, according to new trade data. The U.S. supplied a little more than a third of China’s exports, the country’s lowest share since at least 2006, Reuters reported.

“We compete directly with Brazil for those sales, and I can see China spending huge amounts of money in Brazil to upgrade their infrastructure so that they can become an even more reliable supplier,” Mr. Dolan said, adding that could have “long-term ramifications” on U.S. soybean exports.

“We have been able to compete with Brazil because of our superior freight infrastructure, but if that goes away, we could be in trouble.”

Corn growers, by contrast, probably have relatively little to fear, at least for now, as the U.S. uses “so much corn domestically that tariffs would not be huge in the short-term,” he said.

Lindsay Greiner, a member of the Iowa Soybean Association’s board, has 500 acres of corn, 400 acres of soybeans and raises pigs in Keota. He expressed a similar fear about the impact of Chinese retaliation on soybean prices.

“Farmers are worried we could see a dramatic drop in the prices we receive at our local markets,” he said. “Those are impacted by trade issues.”

Soybeans are a key component in U.S. trade, noted Mr. Greiner, who went on a week-long trade mission to China in mid- March. That means any change in their flow overseas could worsen the current $375 billion trade imbalance with the country.

Ag producers in the state have had an ally on the ground in China since last June, when former Iowa Gov. Terry Branstad arrived in the country as the new U.S. ambassador.

“Hopefully we can get some good info and a handle on what’s going on,” Mr. Greiner said.

Al Wulfekuhle, owner of G&W Pork in Quasqueton and past president of the Iowa Pork Producers Association, said he’s concerned about retaliatory tariffs, but noted that import barriers are nothing new to Iowa producers, considering China already slaps a 12 percent tariff on U.S. pork products.

“It’s not free trade – it’s negotiated trade,” he said. “Very little is traded freely between countries. Almost all of it is negotiated, with tariffs, quotas and many other barriers in place that restrict the flow.”

For Mr. Walton, of Walton Farms, the question is whether the tariff issue is going to transform into a broader trade war or if the administration is simply using it as a negotiating tool.

“We’re in the midst of renegotiating NAFTA, and we’re talking about tariffs on China, not only on steel but intellectual property,” he said. “I’ve heard NAFTA talks have kind of stalled, so he [Mr. Trump] might be using this as an issue to restart those.”

Mr. Walton added that he doesn’t expect a trade war to break out, “but tariffs to fix the trade balance isn’t always a terrible thing, either.”