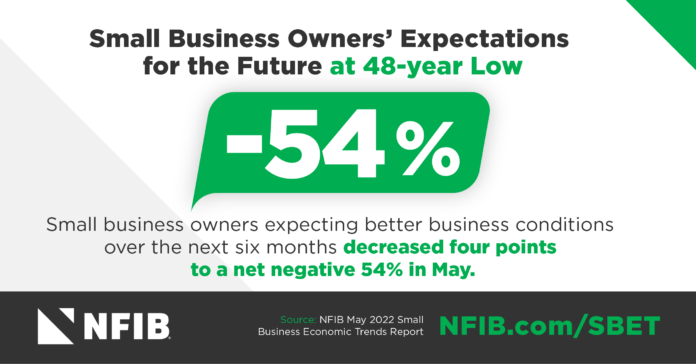 The NFIB Optimism Index fell 0.1 points in May to 93.1, marking the fifth consecutive month below the 48-year average of 98. Owners expecting better business conditions over the next six months decreased four points to a net negative 54%, the lowest level recorded in the 48-year-old survey. Expectations for better business conditions have deteriorated every month since January.

Twenty-eight percent of owners reported inflation was their single most important problem in operating their business, a decrease of four points from April. The net percent of owners raising average selling prices increased two points to a net 72% (seasonally adjusted), back to the highest reading in the 48-year-history of the survey last reached in March and 32 points higher than May 2021.

“Inflation continues to outpace compensation which has reduced real incomes across the nation,” NFIB Chief Economist Bill Dunkelberg stated in a release. “Small business owners remain very pessimistic about the second half of the year as supply chain disruptions, inflation, and the labor shortage are not easing.”

Other key findings include:

The NFIB Research Center has collected Small Business Economic Trends data with quarterly surveys since the fourth quarter of 1973 and monthly surveys since 1986. Survey respondents are randomly drawn from NFIB’s membership. The report is released on the second Tuesday of each month. This survey was conducted in May 2022.