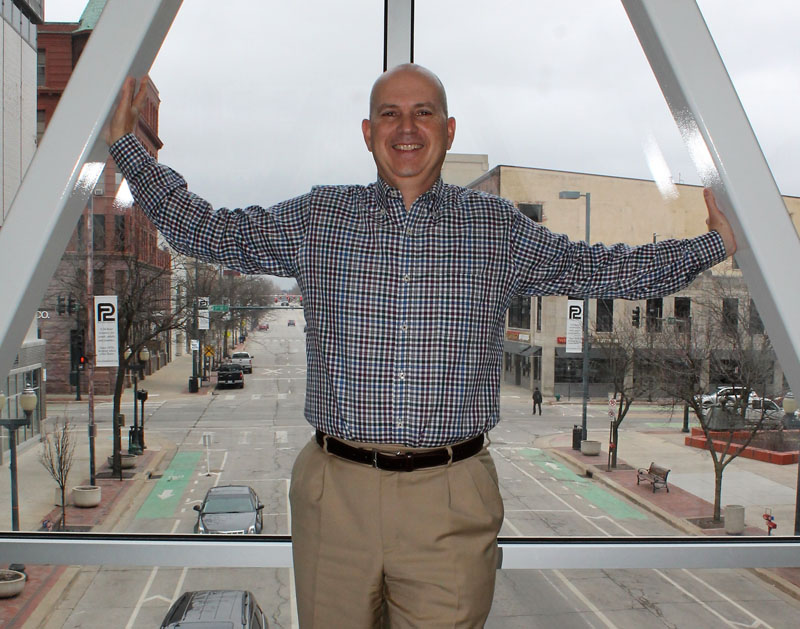 Entrepreneurial Services Group (ESG) serves as a kind of CFO-on-the-go for businesses that need help with financial analysis, reporting and forecasting. The Cedar Rapids-based firm, founded in 2005 by Kris Gulick, has about 45 clients who regularly rely on it to manage their finances, and about 30 more who call on it occasionally. In addition to CFO services, ESG offers bookkeeping and controller services.

“Every client you work with thanks you profusely,” said Mr. Kaufman, a 20-year finance veteran who bought the company in January from Mr. Gulick. “It makes you feel appreciated and feel good about what you’re doing.”

Mr. Kaufman attributes some of the good feelings to the value ESG is able to provide. Most clients have between 12-40 employees and annual revenues of $20-$100 million. It’s a size at which most of them could use a CFO or controller to provide more financial insight and clarity, if they could find room for it in the budget. In some cases, a bank or accounting firm refers them to the company.

“The way Kris built this, and the way I want to continue it is, ‘Where else can you get a CFO without paying a full CFO salary and benefits?’” Mr. Kaufman said. “There’s a lot of value without having to expend a lot of money.”

A typical client pays a fraction of the average salary of a regular CFO under a fee structure based on hours worked. CFOs in the United States make an average of just under $130,000, according to online job site Indeed.com.

Mr. Gulick got the idea for the business after downsizing eliminated his staff position at McLeodUSA, now part of Windstream. He had his CPA license, and when he put out word that he was looking for work, a former colleague from RSM McGladrey (now RSM US LLP) put him in touch with a client. He was brought in to serve as a contract CFO for the client.

Mr. Gulick had been bitten by the entrepreneurial bug when he worked at LiveWare 5, a Bruce Lehrman-led startup that was acquired by McLeodUSA. He was also inspired by a Minneapolis-based company that solely provided CFO- and controller-level services. Believing there was a market for those kinds of services in the Corridor, he began transitioning to CFO-type work and eventually found enough of it to create his own company.

The business was called Entrepreneurial Services Group to reflect its role filling in staffing gaps for fast-growing companies. As the firm grew, Mr. Gulick added two full-time staff members and his wife, Deborah Gulick. Business picked up noticeably after the financial crisis of 2008, as cash flow tightened at many companies and strong financial management became more critical.

Over the last several years, Mr. Gulick has bowed out of billable work to spend more time prospecting new clients and finding new ways to help existing ones. He’d always heard about the importance of founders “working on” rather than “working in” their business, and his efforts seemingly paid off.

As the economy has improved, business growth has increasingly been driven by a different factor.

“The labor market in the Corridor has made it a challenge to find talent. That’s another reason we’ve grown so much in the last few years,” Mr. Gulick said. “It’s filling a niche.”

Mr. Gulick sold ESG shortly after his December 2016 announcement that he would run for mayor of Cedar Rapids. While the sale will allow him more time and freedom to campaign through the November election, he said the two events are less related than they appear.

“It was the right time,” said Mr. Gulick, who has been an adjunct accounting instructor at the University of Northern Iowa and University of Iowa, and a Cedar Rapids City Council member since 2005. “I’d been considering selling the business for a while.”

Mr. Gulick worked closely with Mr. Kaufman on the transition, and plans to continue to offer his services on a consulting basis. One opportunity of interest to Mr. Gulick is whether the outsourced-CFO model he employed at ESG would work in the public sector. With budgets tight in many areas of local government, he sees possibilities for helping governments improve their finances without adding costly staff positions.

Mr. Kaufman said he’s more interested in ensuring that everything runs smoothly at ESG than in making changes, but his longer-term interests include adding staff in Johnson County and potentially offering niche services to companies with employee stock ownership plans, or ESOPs.

Mr. Kaufman has an extensive background in financial leadership with two ESOP companies – CarePro Health Services in Cedar Rapids and Caltrol in Las Vegas – and has worked with ESOP trade associations and legislators to pursue state and federal legislation favorable to forming and operating ESOP companies.

With many business owners getting close to retirement, he expects the conversion of companies to ESOP ownership to accelerate.

“There’s a nice tax benefit [for business owners] to converting to a ESOP,” Mr. Kaufman noted. “Some proprietors want to leave a legacy, feel some loyalty to employees and want the business to continue in its setting rather than, say, selling it to venture capital or private equity where they might get more money, but the company doesn’t stay intact.”

Mr. Kaufman was high on Mr. Gulick’s list when he thought of people who could take over ESG. Both men had worked at RSM McGladrey as accountants in the 1990s. They stayed in touch through mutual friends and professional interests.

While he had been wanting to own his own business for many years, Mr. Kaufman said he was still a little surprised when he took over how different it is from working for an employer, and he’s grateful to have a strong staff.

“The challenge for me will be finding staff,” he said. “The uniqueness of our organization is the amount of experience our staff have, which just kinds of adds to the difficulty. It’s hard to find people with 20 years of experience doing this for one company who want to do the same kinds of things for several different businesses at once. It limits the pool of people out there.”