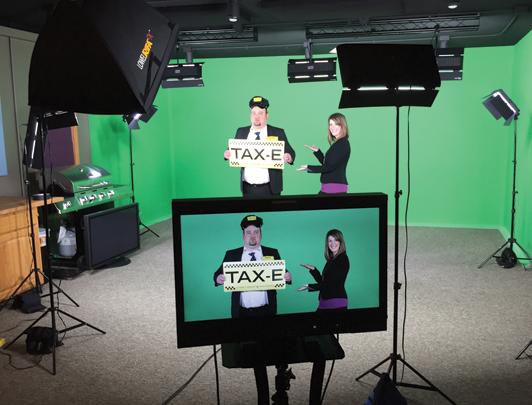 As more companies use video on social media to gain brand awareness, Corridor companies are finding that video can help build audiences for many subjects formerly considered dull.

Most marketing videos for social media such as YouTube, Vimeo and Facebook are less than one minute long, and can be produced inexpensively in-house. They’ve become a preferred media channel for reaching younger audiences, and success stories abound.

“The Most Uninteresting Man in the World,” a series of comical videos about accountants at Iowa-based firm Honkamp Krueger, has helped the company’s YouTube channel gain more than 16,000 views, according to Nicole Gantz, the firm’s marketing manager.

The videos play off the stereotype of accountants as colorless professionals obsessed with numbers, in a style mimicking the successful Dos Equis beer commercials, which became an Internet meme.

While the videos are unquestionably engaging and funny, Ms. Gantz said the key to success was running it across other marketing platforms including print, radio and other social media, and using it to drive traffic.

Honkamp Krueger tweeted the “Most Uninteresting Man” videos out to its Twitter followers and sent a link to Accounting Today, a leading industry publication that put it on Facebook and sent views up from 700 to 3,000.

“We’ve actually picked up business from people who said, ‘We saw your video and we want to do business with a company like you,’” Ms. Gantz said. The videos were produced by Happee Smith Productions, a Honkamp Krueger customer based in Dubuque.

Metro Studios of Hiawatha was brought in by Roll Out Mats of Webster City to create a similarly engaging video campaign.

“We developed a ongoing content plan, including search engine optimization (SEO), with tutorials of wrestling moves,” said Mr. Brambila, senior digital marketing strategist at Metro Studios. The 26 videos, which use Iowa wrestlers to enact the moves, started out on page five of the search engine rankings, but gradually made their way to the first page.

“The most important SEO factor is the watch time of the video,” Mr. Brambila said. “The wrestling mat tutorials are a very soft sell of the wrestling mats. At the end, we did throw in a pitch, but it was after we gave value. Like anything else in life, the more you give, the more you’re going to get.”

U.S. Cargo Control, a division of Clickstop in Urbana, uses more than 100 videos on its blog and on YouTube to explain how to select and use its products for securing loads to vehicles. The company also uses videos to introduce its staff members, giving the company a very human face.

“Our how-to videos are getting the most views,” said Lisa Kirchhoff, a content specialist at U.S. Cargo Control. The straightforward voice and tone of the videos are important, Ms. Kirchhoff said, because the videos are designed to be understood by individuals from a wide variety of backgrounds. They quickly explain how to secure loads ranging from motorcycles to John Deere tractors using U.S. Cargo Control products such as ratchet straps, chains and lever binders

“Many of our products don’t come with instructions,” Ms. Kirchhoff said, so the videos are an obvious way to help customers while building brand loyalty and awareness.

Achieving professional-quality results with short video doesn’t have to require a professional video production company or even much expense, experts say, although longer videos and those used for branding purposes may be a different story.

The explosion in social media video “has really changed the market,” said Jeff Zahrt of MVP Productions, based in Cedar Rapids. The company is occasionally hired to provide training in how to produce social media videos, but mainly produces longer, 20-30 minute corporate videos.

Mr. Zahrt said he advises clients to have a professional firm involved when producing brand awareness videos that introduce a company to new customers, because they want to create a powerful and compelling first impression. When using video to educate existing customers on a topic, Mr. Zahrt said self-produced video can come across as more personal and authentic.

The important things are to have a clearly defined story to tell and at least one employee or character who is comfortable moving and talking on camera, Mr. Zahrt said. He recommends screen testing those who have no experience, because speaking and acting on screen don’t come naturally to many people.

The equipment used to produce video need not be expensive, according to Rollin Banderob of Photo Pro in Cedar Rapids, although some small investments can make a huge difference in the quality of the video. Many customers taking the low-cost approach use smartphones or action cameras such as the Go Pro or Sony Action Cam.

Mr. Banderob said the chief drawbacks of those setups are poor audio quality and the lack of image stabilization, which can yield jittery video.

To remedy those problems, Mr. Banderob recommends a microphone from Rode called the Smart Lav (lavalier) that can be plugged into the video camera. The higher-quality audio output must be synched up with the video in production. A tripod can also go a long way toward avoiding jumpy, jittery video, Mr. Banderob said, and isn’t very expensive.

Moving up the ladder, Mr. Banderob said customers can find a variety of digital single lens reflex (DSLR) cameras that offer good video quality and the ability to change out lenses. They can be equipped with external microphones and cages that provide attachment points for handles.

Although production standards don’t always have to be high, Mr. Zahrt strongly recommends having some baseline standards. Consistent lighting, audio and a clear narrative are the main things that shouldn’t be sacrificed.

Just remember, Mr. Zahrt says, “You can go viral. But you can also go viral as a joke.”

Following the 2013 introduction of “The Most Uninteresting Man in the World” series, Honkamp Krueger released “Smart Tank,” a video campaign using accountants to parody the TV business pitch competition, “Shark Tank.” It features managers in the firm pitching bizarre business concepts that demonstrate the company’s passion for accounting to its partners, without success.

The latest foray into video is for Honkamp Krueger’s workforce solutions business, with the theme “We can take a lot off your plate.”

Ms. Gantz chuckled at the number of plates broken during production, and said that the company considers its videos a good investment.