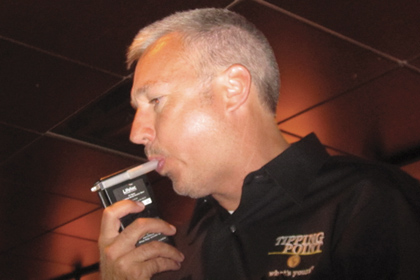 CORRIDOR – It can be difficult to know whether it’s the right choice to get behind the wheel after having a few drinks during a night out.

The simple solution is to take a taxicab home. For those who are on the fence about whether to make that call, there is a new company that aims to help people make the decision based on their blood alcohol level (BAC).

The Quad Cities-based company Tipping Point was started by Mark Ross, a recent graduate of the University of Iowa Executive MBA program, who is a business development consultant and insurance broker.

“About a year ago this time, a friend of mine got a DUI (Driving Under the Influence ticket) and I saw the amount of dollars and everything that went to that,” he said.

At first, he researched whether there could be an insurance policy solution to the expense of a DUI.

So he changed tactics. Instead of insuring people against the cost, he decided to look into ways to prevent DUI tickets. There are many factors that determine a person’s blood alcohol level and many times people overestimate their ability to drive, he said.

“Two people could have three of the exact same drinks and it could affect us differently,” Mr. Ross said. “One weighs more, it has to do with metabolism, how much sleep you’ve had, hydration levels, what you had to eat, when you ate it, what you’re drinking. You can’t say, ‘I’ve had three drinks, so I should be at this (BAC) level.’ People are constantly surprised where they’re at. We’ve had multiple people come up to us and say, ‘Hey, I would have driven if I had not taken this test.’”

Starting this summer, Tipping Point representatives will be found in downtown Iowa City on weekend nights and at special events in Cedar Rapids. For $3, people can have their BAC tested using the Lifeloc FC20 breathalyzers. Customers can keep their breathalyzer straws and take the test again that night without an additional charge. Those who blow a number higher than the legal limit to drive will be given a phone number to call a cab.

“If somebody blows a high blood alcohol level, we say here’s a cab company we’re partnering up with,” he said. “We’re not personally responsible for making sure they get in a cab. We don’t see ourselves as shifting the liability. The bar owners are the ones providing the alcohol. We’re just making customers aware of it (their BAC levels).”

Tipping Point workers will be mobile, walking through the downtown Iowa City offering the test. They will also be stationed in some bars.

“The bar owners, some of them like this, some don’t,” Mr. Ross said. “They all see the value to it. Some are concerned it will affect people’s buying habits in the bars. There are some bar owners that will let us actually be on-site in their bars; we’ve got permission to be there. We’ve got some who have asked us to be there and there are some who don’t want us there for some reason, so that’s why we need to be outside the bars, as well.”

Mr. Ross was in town last week training workers on breathalyzers and how the company works.

“We’ll be there (downtown Iowa City) late nights, midnight to 2 a.m.,” he said. “We really need a concentration of a couple thousand people out and about to make it worthwhile.”

He is looking to expand his business to towns across the country.

“We’ve done beta sites. We’ve done (tested the business in) Houston, San Diego, Nashville, Phoenix,” Mr. Ross said. “We’ll be in Peoria next week, then Iowa City and the Quad Cities. The goal is to be all over the country. We’re still a work in progress as far as our business model and how it’s best to work.”

Tipping Point plans to have a local manager in each city to operate the business, similar to a franchise.

“We’ve found we really need someone local who knows the bar scene, where you should be for special events, as well,” he said. “We’ll be not only inside some bars but outside some bars, where there are clusters of bars where people are milling about. Then we’ll do special events like tailgating, outdoor concerts, weddings, golf outings, anywhere there are people drinking.”

Mr. Ross said he knows not everyone will be interested in taking the breathalyzer test. Last year, he hired Vernon Research Group out of Cedar Rapids to conduct market research for him, to determine interest in the test. Of those surveyed, 71 percent said they would be interested in paying to find out their BAC before driving home from a bar, party or special event.

“Some thought it was a great idea, some people thought, ‘Well, I don’t know,’” he said.

Then he did beta testing, taking the breathalyzers to large cities to determine the business’ viability.

The only hiccup so far is customers worrying that Tipping Point is working with the police, said Sara Bytnar, a Tipping Point employee.