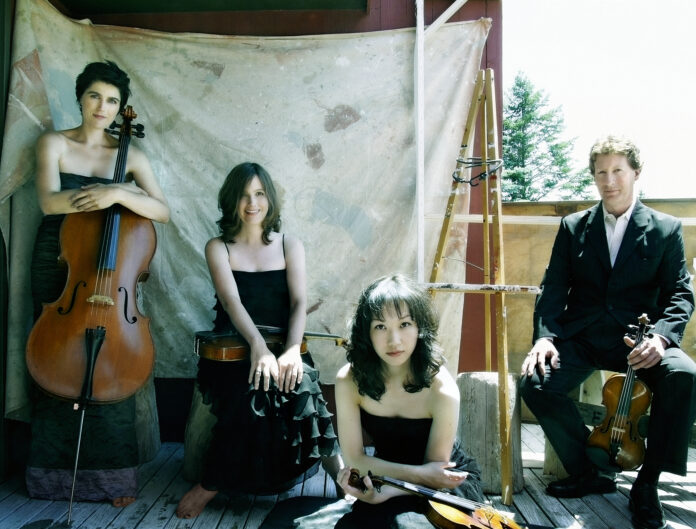 IOWA CITY – A new music festival in downtown Iowa City hopes to debut on a high note this weekend.

The festival features three concerts by the Maia Quartet, the University of Iowa’s faculty string quartet, and several guest artists. The performances are free and open to the public.

The schedule is as follows:

–At 10 a.m., “A Very Open Rehearsal” will take place at the Recital Hall on the ground level of the University Capital Center. The event, led by Nancy Hagen of Iowa Public Radio, will encourage participants to interrupt the rehearsal with questions and comments.

–At 7:30 p.m. that night at the church, guest violinist and UI Professor of Music Katie Wolfe, violist Nathalie Cruden and Mr. Campbell will join the Maia Quartet for a performance of Arnold Schoenberg’s “Transfigured Night,” inspired by a poem of the same name by Richard Dehmel. Also on that night, Ms. Park and Mr. Hanick will perform Anton Webern’s “Four Pieces for Violin and Piano.” Mr. Campbell and Mr. Hanick will also team up to perform Mr. Webern’s “Little Pieces for Cello and Piano.”

–At 3 p.m. June 26 at the church, Ms. Wolfe and the Maia Quartet will perform Franz Schubert’s “String Quartet No. 14 in D Minor,” inspired by Schubert’s song “Death and the Maiden,” which was itself taken from the poem of the same name by Matthias Claudius. The quartet and Ms. Wolfe will also perform Osvaldo Golijov’s “Tenebrae.”

For more information about the festival, musicians and events, visit www.uiowa.edu/musicic/festival.html.

The festival is the brainchild of Ms. Park and Judith Hurtig, who worked at Hancher Auditorium for 23 years, most recently as its artistic director, until she retired in 2009.

“We began talking about some kind of chamber music festival in Iowa City,” Ms. Hurtig said. “There had been one a number of years ago for a couple of years. It got very popular and then for a variety of reasons, it ended. And there’s been a lot of talk about wanting a summer chamber music festival.”

They discussed how they could differentiate the event from the thousands of summer chamber music festivals that take place around the world. They decided to focus the festival on Iowa City’s literary reputation.

“Of course, there’s this great tradition of writing and reading that exists in this community and in the larger Iowa City community. We have great libraries, we just had the 75th anniversary of the Writers’ Workshop, the International Writing Program,” she said. “And there is a wealth of music where the composers were inspired by works of poetry and prose.”

They designed the festival with two main components: the literature-inspired music and performances by musicians who grew up in Iowa City who are embarking on professional careers, such as Mr. Hanick.

“We hoped that these two things would really root this festival in a particular place, Iowa City,” Ms. Hurtig said. “Then we actually sought out as partners, other organizations that are also rooted in the literary traditions of the community.”

Earlier this week, for example, the festival partnered with the UI’s Summer Writing Festival for a musical performance aimed at inspiring participants of the writing festival.

Throughout the weekend, Martin Andrews, a producing director with Working Group Theatre, will read the literary sources before each performance. Text of each literary piece will also be on the playbill and on the festival website.

“People will be able to make the connection; it will be quite easy,” she said. “A lot of this music is played outside of a literary context, so the people who know the music, maybe they don’t realize how rooted it is in the written word. So we’re hoping they’ll listen to the music in a different way, too.”

Additional music will be played at the concerts that will be unrelated to the piece of literature, but that works well with the music played.

The Saturday morning rehearsal will be an informal chance for people to engage musicians about the way they work.

“Nobody has to speak, but anyone who wants to jump in and talk about the music with the musicians is certainly welcome to do that,” Ms. Hurtig said.

Organizers chose Trinity Episcopal Church for the festival location because of its proximity to downtown, as well as other factors.

“Trinity is the perfect size for chamber music; it seats about 200,” she said. “The acoustics are really nice and they were willing to have it.”