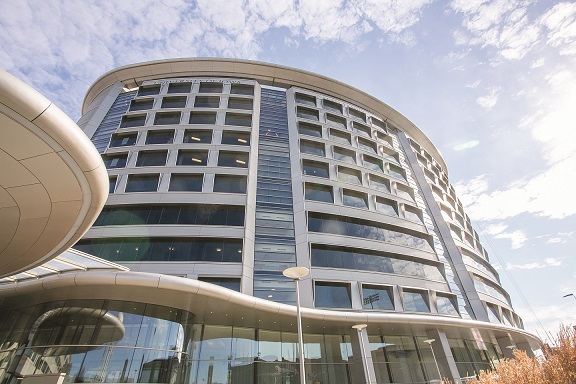 With the completion of the move of more than 30 pediatric patients and their families to the new University of Iowa Stead Family Children’s Hospital on March 25, all pediatric inpatient units are now located in the new facility. Only the Level 4 surgery center and Level 5 surgery and post-anesthesia care unit have yet to move into the new facility.

Lilly, 9, of Burlington, was diagnosed with acute myeloid leukemia on Christmas Eve and has spent much of her time hospitalized since then, undergoing chemotherapy and preparing for a bone marrow transplant.

Before she moved into the new 14-story hospital last month, she often had to stay confined to her room because of her depressed immune system. A HEPA air filtration system on all patient floors reduces the risk and spread of infection in the new hospital, allowing Lilly to go to classes and other activities.

“When your (blood) counts drop, you’re kind of isolated,” said Lilly’s mother, Maria Timmerman. “It’s hard for them to not be with their peers. Here, we can go anywhere on this unit.”

The HEPA system filters out 99.9 percent of contaminants on patient floors, such as tiny dust particles, mold spores, pollen and bacteria. Operating rooms and inpatient rooms, such as the 11th floor where Lilly is staying, are equipped with additional HEPA filters at the vents to provide an extra line of defense against the spread of airborne infectious agents.

Ms. Timmerman also appreciates the spacious patient rooms, which include a couch that converts into a bed. Lilly, a third-grader who enjoys art, has taken a liking to the high-tech bedside touch screen that allows her to play games or watch movies on a flat screen TV.

The $360-million hospital’s opening has been long anticipated, beginning with the demolition of a parking ramp that previously sat on the site in 2012.

Originally expected to open in December 2016, the first patients were moved Feb. 25, with the final group arriving March 25.

Scott Turner, executive director of Stead Family Children’s Hospital, said a limited availability of skilled labor needed for the project was one factor in the delay. Finding certified people to install the special rubberized floors, for example, was a challenge, he said.

Mr. Turner added that changes, such as including windows strong enough to withstand an EF3 tornado – with speeds of 165 mph – led to increased costs over the original budget estimate of $270 million.

No tax dollars were used to fund the building, he noted, with $190 million in bonds, $120 million in cash reserves and operational funds and $50 million in private donations.

Jerre and Mary Joy Stead, former Maquoketa residents for whom the hospital is named, committed $25 million to children’s medicine at the University of Iowa. Jerre Stead has had a long career leading technology and information companies, currently serving as chairman and CEO of IHS Inc.

The Gerdin family, of North Liberty-based Heartland Express, made a $12 million gift commitment to support the new hospital. The first-floor lobby is named after the Gerdin family.

Jason Miller, director of project management for the children’s hospital, said the project did not have a single general contractor. Rather, contractors bid on 26 prime contracts, with nearly 4,000 workers involved in the building project and 90 percent of those from Iowa.

Workers put in more than 2 million hours of labor on 500,000-plus-square-feet of space, with no accidents resulting in serious injury and only two lost-time accidents, Mr. Miller said.

Mr. Turner declined to comment on a contract dispute with Modern Piping regarding work on the facility. Hospital spokesman Tom Moore sent a statement saying University of Iowa Health Care representatives do not discuss matters that involve litigation.