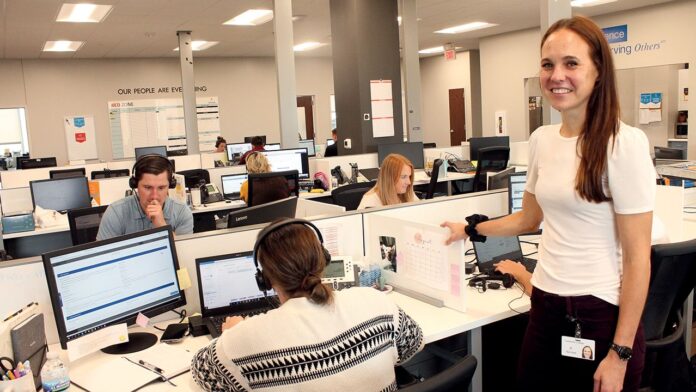 Make no mistake, the daily workplace atmosphere at Aerotek is competitive and intense.

Most of the approximately 20 employees at the recruiting and staffing agency at 4201 42nd St. NE in Cedar Rapids work on commission, and Cassie Costigan, the agency’s director of market operations, acknowledges the pressure-packed nature of Aerotek’s job placement functions, driven by ambitious, commission-based goals.

Yet even so, a recent visit to Aerotek’s office found employees casually joking with each other, exchanging personal anecdotes and supporting each other’s efforts.

That’s the kind of ethos Ms. Costigan said Aerotek encourages – and why the company, a fixture on the Corridor Business Journal’s Coolest Places to Work list, finds itself atop the heap in the medium-sized category for the first time this year.

By all accounts, the past 18 months have been challenging for most companies, coupling a catastrophic pandemic and a resultant recession that led many companies to not only slow down their hiring, but furlough workers. Aerotek faced its challenges, sending most of its own employees home to work remotely “at the drop of a hat” back in March 2020.

For Aerotek, the remote model wasn’t conducive to long-term success. Employees started to trickle back into the office shortly after the company’s work-from-home mandate was lifted, about eight weeks after being instituted. They wanted to return to an in-person environment, Ms. Costigan said, and she thinks she knows why.

“They crave the culture,” she said. “They crave being around everyone. That’s going to be the key factor – wanting to work with the people. It’s a work hard, play hard environment, and we care a lot about each other. You want that person next to you to do well, and then you just want to do a little bit better. So we’re always cheering each other on, but also holding each other accountable when we’re not doing what we came here to do.”

One benefit of the pandemic, Ms. Costigan said, is that, like many other companies, Aerotek learned that remote and hybrid work arrangements were feasible. As a result, flexibility will be a part of the company’s workplace model going forward. Having four young children herself, Ms. Costigan said she’s keenly aware of the challenges faced by working parents.

“I had a flex schedule,” she said. “I had earned it, and I was in a different position. But it wasn’t necessarily the norm. Now it’s pretty normal. I have someone that comes into the office one to two days a week, then works remote the rest of the time. You have the ability to choose. Now with that, we’re a production-based company. If working from home works for you, work from home. As long as you’re producing, and you’re coming through for the team, and you’re contributing to the culture, where you do it and how you do it is kind of up to you.”

To help foster a team environment, Aerotek has historically participated in community activities such as the United Way’s annual Day of Caring. In addition, the company sponsors outings to community events, such as Cedar Rapids Kernels or RoughRiders games, and catered lunches, birthday parties and baby showers are regular occurrences. It’s all part of building a team atmosphere and forging personal connections, Ms. Costigan said.

“What level of relationship do people have?” she said. “You can build a great relationship in the office by doing the work, but getting to know people on a more personal level, what drives them — that helps us push them and help them reach their potential.”

That kind of support, Ms. Costigan said, even extends to employees who may be struggling with their job function or meeting their goals.

“One of the main questions I get asked is, why do you stay here?” she said. “If people leave, it’s most often because of the pressure. But the neat part is that someone next to you has gone through it, so not only do we have a lot of pressure, we’re big on communication. For me, I don’t know what I can’t change. So if you’re not where you want to be, if you want to adjust things, let’s talk about it because there’s not a one size fits all (way) to get the job done. We have the flexibility to change approaches. We have our guiding principles, such as honoring your promises, respecting the past, creating a better future. But we have to adapt and evolve, as the market does, and sometimes people do it differently.”

Aerotek even offers the opportunity to switch positions if another job would be a better fit for an employee’s skills and interests, Ms. Costigan said.

“If someone’s struggling, it’s not just on them,” she said. “There’s constant feedback. Who’s been grouping up with them? What have we tried? It’s a hands-on effort. Each recruiter, when they start, is typically tied to a manager who’s working directly with them. If they’re struggling, it’s not just on that manager. We’re saying, what’s working and what’s not? Is this the right fit for them? Maybe someone is struggling because they’re not as fast-paced, so we can say your efforts are there, your attitude is there, but maybe there’s a better fit on our team. So we can potentially adjust them to a better division or a better fit.”

Competitions between employees are a primary driver of success as well, she said. Among the most prominently displayed competition incentives is the “Owners Wall,” an array of football helmets bearing employees’ names and the regalia of their favorite teams. The helmets are earned by employees who hit “contests” or goals, which also result in the employee earning partial ownership of the company and an all-expenses-paid trip to Cancun.

“This is really a company where you get out what you put in,” Ms. Costigan added. “People are there to help coach you and push you, as long as you’re willing to do the work … It’s fun to win, but it’s fun to win together. You may have someone coming through for their team, and they’re getting a lot of attention, but it’s a lot more fun when the whole team is going with you. It’s not about taking people down. It’s a team effort.”