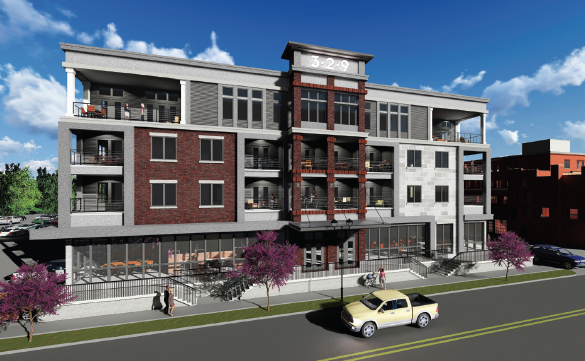 The 329 building planned by Ahmann Companies will fill a gap in Cedar Rapids’ 12th Avenue streetscape, between the National and the Geonetric building. RENDERING AHMANN COMPANIES

A review of plans for the proposed 329 project in Cedar Rapids’ New Bohemia District has pushed growing interest in NewBo home ownership and concerns over parking into the spotlight.

Ahmann Companies on March 16 reviewed its proposal during a meet­ing of the city’s Planning and Zoning Commission. Plans include a four-story, 37,575-square-foot building at 329 12th Ave. SE, including seven lots in the 1200 block of Seventh Street SE.

The project is adjacent to the Chrome Horse building, a historic structure which has been renamed by Ahmann Companies and its partners as The Na­tional, and renovated as a mixed-use building. Tenants include Caucho, a Mexican restaurant, and the Brewhemia coffee house.

The 329 building will include 22 resi­dential units on its upper three floors and ground-floor commercial space.

The fourth floor units will all be offered for sale due to growing interest in NewBo condominium ownership, according to Chad Pelley, business development man­ager at Ahmann Companies. Depending on demand, even more of its units may be offered for sale.

The ground floor space will be mixed commercial, which could include retail, restaurants or office, he said. Ahmann Companies has proposed providing 78 surface parking spaces, including some covered parking at the rear of the building.

Public comments reflected concerns by the NewBo City Market that the project could tighten up the supply of parking in the area.

“Our main concern is just keeping up with the popularity and the parking needs,” said Taylor Bergen, operations di­rector for the market.

Czech Village/NewBo Main Street Dis­trict Director Jennifer Pruden said a park­ing study on the district had recently been completed. It showed adequate parking for the businesses and residents in the district now, “but as we add more of these high-density developments, it’s going to change,” she said.

How the contemporary styling of the building would fit with the neighbor­hood’s historic structures was the largest concern raised in the design review pro­cess, Ms. Pruden added.

Mr. Pelley said adequate parking is al­ways a concern for Ahmann Companies’ developments, but the company doesn’t believe it has an obligation to provide parking for others.

“We’re at $35 million in investment in NewBo,” he said, referencing the nearby Depot project, also developed by Ahmann Companies. “We won’t subsi­dize other owners parking down there, but we will allow after-hours use if they don’t abuse it.”

Mr. Pelley said plans for a parking struc­ture with the 329 project were dropped at an early stage because they weren’t fi­nancially viable. The 78 parking spaces planned for the 329 building exceed city requirements, but the project also received parking credits for factors like being locat­ed on a bus route and near a bike trail.

The planning commission unanimously supported a site plan and rezoning for the project from a I-2 general industrial zoning to a C-3 regional commercial zoning.