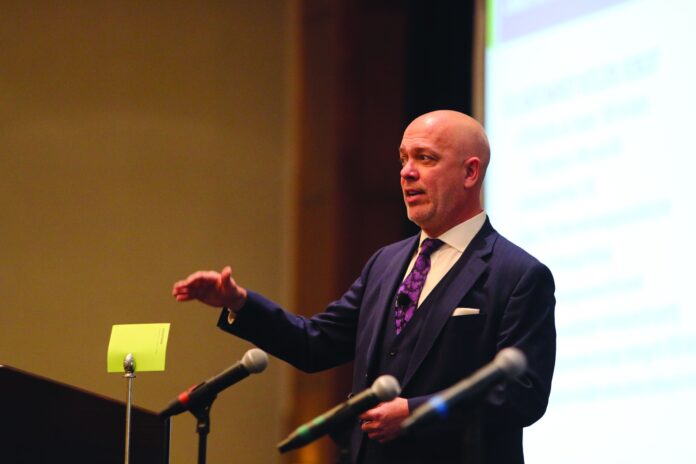 Kevin Depew, deputy chief economist at RSM US LLP, offers his thoughts on the business year ahead at the CBJ’s 2020 Economic Forecast Luncheon. CREDIT ADAM MOORE

CORALVILLE — Slower economic growth is on the horizon for 2020, keynote speaker Kevin Depew told the CBJ’s 2020 Economic Forecast Luncheon on Jan. 22, with a recession unlikely, but trade uncertainty enduring as “the big elephant in the room.”

Mr. Depew, the deputy chief economist of RSM US LLP, relayed a forecast of 1.5% growth in the nation’s gross domestic product (GDP) for 2020, down from an expected 1.8% growth rate for 2019. He pegged the odds of a recession at about one in four.

“Our view is that we’re likely going to make it through 2020 without a full-blown recession, however there are some issues we need to work through,” Mr. Depew said. “The first ones are the issues at Boeing. We believe they’re enough to shave 0.5% from GDP.”

Boeing is a major economic engine in states like Kansas and Washington, exporting its high-tech airplanes around the world. Reports last week that Boeing’s 737 Max may not be cleared by the FAA to fly again until mid-summer after two major crashes linked to a software design flaw helped to solidify that 1.5% growth projection.

Trade uncertainty is “certainly an area of focus,” said Mr. Depew, who contributes to the RSM US Middle Market Index, and its monthly publication, The Real Economy. The trade war with China shaved 0.2-0.4% off GDP in 2019, he noted, and the Phase One trade deal with China doesn’t fix things completely.

Even with that deal in hand, two-thirds of Chinese imports will still be subject to tariffs. The average tariff on those goods is now 20.9%, up sharply from about 8% in July 2018.

While the broader economy is still growing, four specific sectors accounting for roughly a quarter of U.S. GDP – agriculture, logistics, manufacturing and energy production – are currently in recession or stagnation, Mr. Depew said. The concerns are more serious in manufacturing and agriculture, he suggested, however capital investment in the energy industry has slowed considerably.

“The engine that is driving the economy right now is consumers,” Mr. Depew said.

Consumer spending is projected to be up about 2.5% for 2020, he said, and needs to grow above 2% to avoid a recession.

Some of the tailwinds for consumer spending are the relatively low household debt-to-income ratio, and the low unemployment rate, which RSM expects to continue.

One of the biggest drags on the economy has been slowing capital investment. That metric was down 1.5% in the third quarter, partly because of the “uncertainty tax” over trade disputes. Full-year capital expenditures are also expected to be down when fourth quarter numbers roll in. Businesses affected by trade disputes simply don’t want to invest until they see what happens, Mr. Depew said.

How the economy affects businesses and people since the Great Recession has greatly depended on where they live, Mr. Depew said, explaining that in 2020 “you could have a geographic recession” if you live in one of the struggling areas of the country.

Growth has stalled or turned negative in most of the battleground states of the presidential electoral map, he noted, while the tech-driven economies of large metro areas such as Los Angeles, Chicago and New York have led the recovery and continue to grow at rates well above the national average.

“In the United States, 31 counties account for one-third of growth – only 31,” Mr. Depew said. “It’s not particularly normal, but it’s the world we find ourselves in as tech industries concentrate in large urban areas.”

Mr. Depew said residents of his home state of Kentucky, for example, react with disbelief at the rosy economy they see reflected in media reports that tend to originate in the large and prospering metro areas. However, he sees the more rural areas of the country catching up over time, as high bandwidth 5G wireless communications enable people to enjoy the low cost of living in rural areas, while still having access to top-quality medical care and services via telemedicine, as one example.

In Iowa, which relies on an ag economy hit hard by Chinese import tariffs, Mr. Depew said the GDP slowdown is not as dire as in battleground states such as Michigan and Ohio. The Federal Reserve Board sees Iowa’s economy growing at an annual rate of less than 1% in the first quarter of 2020.

While Mr. Depew did not try to quantify the uncertainty effect related to the upcoming presidential election, he said there could be a rebound of capital spending based on pent-up demand after the uncertainty of the election is removed.

In addition to outlining the reasons supporting a 1.5% growth scenario for 2020, Mr. Depew outlined some of the biggest risks that could potentially undermine it. They include a liquidity event in international financial markets, a resurgence of inflation that would cause the Fed to raise interest rates, and geopolitical risks such as a cyberattack due to recent tensions with Iran.

The risk of inflation and a Fed interest rate increase appears low. The Fed has placed rate increases on hold, Mr. Depew said – a course that is not surprising in an election year, after packing “a lot of what they tried to do in the first part of last year,” much to President Donald Trump’s displeasure.

While Mr. Depew held tight to his script, he could not resist remarking on one aspect of his visit to the politically important state in his speech to Corridor business and government leaders at the Coralville Marriott.

“If you think for a moment that I’m not going to go home and tell my wife I had more people in this room than Joe Biden and Elizabeth Warren, you’re wrong,” he said. “In fact, I’m probably going to call her the moment I walk out of the room.”