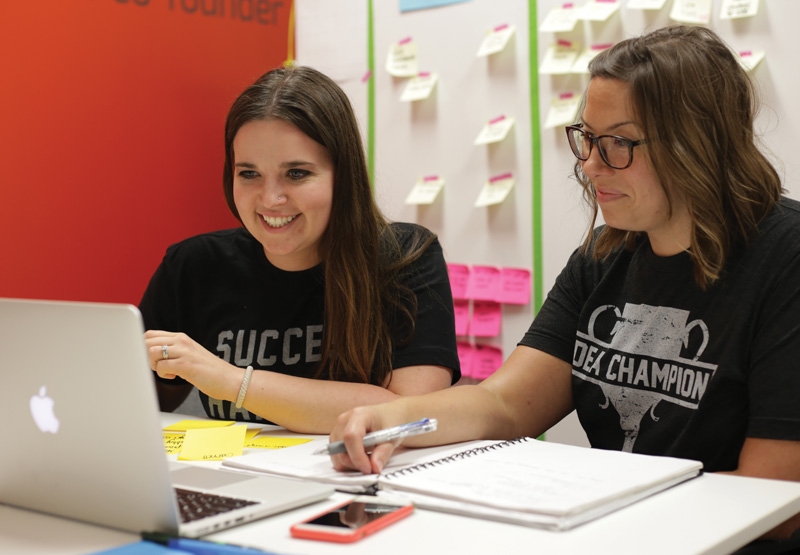 When American Express issued a report in 2014 on the state of women-owned businesses in the United States, the results for Iowa were eye-opening.

The report by American Express OPEN ranked Iowa 49th in the nation in terms of growth in the number of women-owned businesses in the state, and 51st in overall growth in “economic clout,” including the District of Columbia.

For Diane Ramsey, executive director of Iowa Women Lead Change, the report underscored how women in Iowa’s business sector are underrepresented, and served as a catalyst for change.

“The ranking of dead last caused a lot of people in our state to get out of their complacency,” Ms. Ramsey said.

Now, two years later, that tide may be turning.

In April, American Express OPEN released a report claiming dramatic progress in the state. The report said Iowa presently ranks 30th in growth in the number of women-owned businesses, and fourth in terms of growth in economic clout, which accounts for employment numbers and revenue.

Although the change in scope makes comparisons difficult, one key player in the Corridor’s entrepreneurship scene has already experienced a shift in its demographics.

The current cohort at the Iowa Startup Accelerator (ISA) in Cedar Rapids consists of six businesses, an unprecedented half of which are led by women: WRITTEN Apparel, a women’s fashion label dedicated to locally produced, high-end clothing; AssetRover, a finance site aimed at rental property owners and investors; and Girls With Ideas, which develops lesson plans that cultivate youth leadership.

Working as a school psychologist in 2012, Girls With Ideas Founder and CEO Allison Poss said she was responsible for issuing IQ tests to struggling students. As part of a sample question, one third-grade girl was asked to explain “how red and blue are the same.”

“And she said, ‘Oh, they both need each other to make the color purple,’” Ms. Poss recalled. “I loved that answer, but if I were to actually score that answer, it would be considered wrong.

“I just thought about her growing up, raising her hand, and over time, how that hand is not even going to try anymore,” she added. “And if I think about the world I want to live in, the people I want to be around, that I want to be my friends and my co-workers, and be leading my community, I want people that think like her.”

The experience inspired Ms. Poss to develop the Girls With Ideas curriculum, which provides hands-on leadership training for girls ages 9-13, and is largely intended for after-school programs or community groups.

The company’s four-member team is now preparing for Launch Day on Nov. 3, when the ISA’s cohorts will unveil their newly-refined business models to potential investors at the Paramount Theatre in downtown Cedar Rapids.

Girls With Ideas is also in the process of building a board of advisors. That group will ideally be comprised of women and men who are already familiar with the company, Ms. Poss said, and who have established networks to support new partnerships.

Ms. Poss said those advisors could play a pivotal role in the company’s future. Like most startups, funding can be a challenge, especially when most investors are men who can’t directly identify with the company’s main product.

“I think that that’s been a big hurdle, and we’ve overcome it by finding really great mentors, both men and women, who believe in what we’re doing and understand it,” she said.

As Girls With Ideas assembles its board of advisors, IWLC is also working with the Iowa Startup Accelerator and its parent organization, NewBoCo, to establish a formal mentoring program, which the groups hope to launch early next year.

David Tominsky is the managing director of the Iowa Startup Accelerator, which accepted its first cohort in 2014. In curating this year’s class, he said considerable attention was paid to the traits of the companies’ founders, as opposed to prioritizing their ideas or even market demands.

“It wasn’t idea-first. It wasn’t market-first, in my opinion,” Mr. Tominsky said. “It was team-first, and now we put those in the order of team, market, then idea. The ability to take feedback was really important.”

Having half of the current cohort led by women is new for the accelerator, and Mr. Tominsky hopes it establishes a “new normal” for Iowa, where gender parity in the workforce is closely watched.

In 2014, IWLC partnered with Nexus, Iowa State University’s Carrie Chapman Catt Center and the University of Iowa’s Tippie College of Business to study the presence of women in leadership positions.

The study found that women represented 22 percent of executives at publicly-traded companies in Iowa, and 25 percent at private, for-profit companies. According to the Pew Research Center, just over five percent of CEOs at Fortune 500 companies were women, as of 2014.

“The fact is, those gaps exist, and they exist for a reason,” Mr. Tominsky said. “If we can take the time to reflect and figure out why those exist, and what we can do together to close those gaps, that’s the work that matters.”

In the meantime, Ms. Ramsey said she hopes other aspiring entrepreneurs take notice of companies like Girls With Ideas and the rest of the ISA cohort.

“There’s nothing that breeds success like success, so if you’ve seen a woman who’s gone out and has started to be successful, it’s going to provide the impetus to give women the confidence that they can be successful themselves,” she said.