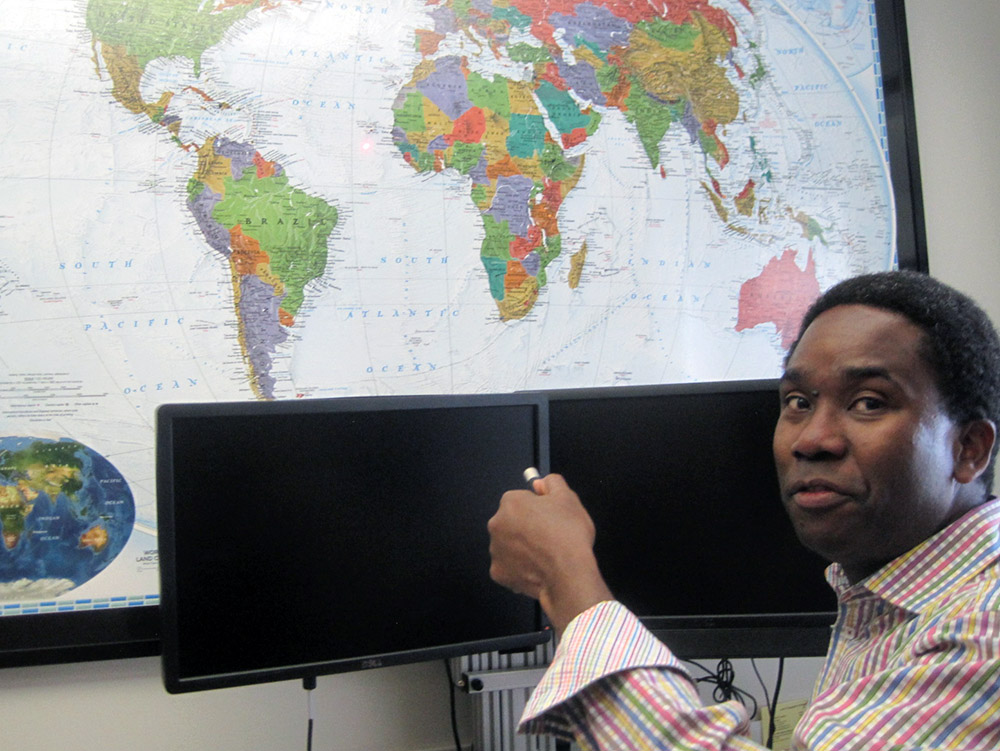 Dimy Doresca of the UI’s Institute for International Business points at Africa on a map of the world in his office. The continent has been called “the next Asia” for offshore manufacturing. PHOTO DAVE DEWITTE

Like many other American business own­ers looking to export, Jeff Quint has heard about Africa’s rising middle class and wondered if the market is ready yet.

Recently, Mr. Quint decided to get a closer look. He’s planning to spend a week next month with an Iowa Economic Development Authority trade delegation to Africa. After some study, he decided to spend his entire week in South Africa, where a trade liaison identified more than 40 potential distributors for his premium whiskey and bourbon products.

“You can all fight over the top five coun­tries or go into this second tier,” observed Mr. Quint, founder of Cedar Ridge Winery and Distillery near Swisher. “They [South Africans] buy more American whiskey than China.”

More whiskey, yes – but will Africans have an appetite for a premium offering like Cedar Ridge’s award-winning single malt, which sells for around $50 a bottle in the United States? Mr. Quint said that will be part of the export learning experi­ence motivating his trip.

“In many of these countries, just going out for a beer after work is a great luxury,” said Mr. Quint, who is also planning his second export trip to Europe.

Two trips a year to Africa are about the norm for Dimy Doresca, director of the Institute for International Business in the University of Iowa’s Tippie College of Business. Mr. Doresca believes Africa is one of the most underestimated markets for trade, and would like to see more Io­wans heading to the continent.

Africa has been called “the next Asia” for offshore manufacturing, Mr. Doresca said, offering inexpensive labor and abun­dant natural resources. Chinese business­es are now investing heavily in the con­tinent to stay one step ahead of low-cost producers in other countries.

“What the west used to do 25 years ago in China, China is now doing in Africa – investing in new manufacturing infra­structure,” Mr. Doresca said.

China’s foreign direct investment in Af­rica grew at an annual rate of 20.5 percent between 2009-2015, with most of that going into Algeria, Kenya, Nigeria, the Re­public of the Congo and Zambia, accord­ing to a report from Johns Hopkins Uni­versity. The investment in infrastructure like factories and ports has been accompa­nied by a flood of more than $95.5 billion in loans to African governments and state-owned enterprises from the Chinese gov­ernment, rivaling and at times surpassing annual investment from the United States.

Mr. Doresca and his colleagues at Tip­pie have been among the leaders in Iowa’s efforts to build trade ties in Africa. For the past two years, the UI has been participat­ing in the Young African Leaders Initiative, hosting the Mandela Washington Fellows, a select group of African businesspeople who come to the United States to study, network and build contacts each year.

The 25 Mandela Washington Fellows who’ve come to the UI both summers provide a window into the growing Afri­can middle class and generate goodwill for possible trade connections with Iowa, Mr. Doresca said. About 40,000 Africans apply for the nationwide program each year, but only about 700 are selected. The next group of Mandela Washington Fel­lows to visit Iowa will arrive June 20 for a stay that will last until July 27.

“They’re the movers and shakers of Africa,” Mr. Doresca said. “They are the cream of the crop. They can generate trade with Iowa.”

Many come to the United States eager to forge partnerships with companies so they can bring new technologies and products back to their home countries, he added.

Silvia Tonui of Kenya founded Marigat Gold Honey with two sisters over two years ago, buying honey from small farm­ers in the Rift Valley of Kenya and selling it in supermarkets, hotels, farmers markets and online. During the Mandela Wash­ington Fellows program, she attended the UI’s Venture School, where she “re-strat­egized” the business, and visited Indian Creek Nature Center in Cedar Rapids to learn different methods of packaging hon­ey. She even secured a small grant through the Tippie College of Business so her com­pany could buy its own beehives in order to train farmers in beekeeping and have a more reliable supply of quality honey.

“I am also in a business collaboration with post-graduate students at the UI who are helping me build a sustainable busi­ness strategy,” Ms. Tonui wrote in an email.

The post-grads are helping her study export opportunities to set up distribution in Iowa grocery stores.

Mandela Washington Fellow Jones Koetlisi of Lesotho is working to bring reliable and professional ambulance ser­vices to the scenic mountainous kingdom through PEMS 24 Seven, a company he helped launch about five years ago. But the service has so far been limited to two am­bulances, and has not reached its goal of providing fire protection services because of the high cost of firefighting gear.

During the fellows’ visit, Mr. Koetlisi toured local fire and ambulance services to learn how they operate. He said he picked up good ideas from visiting the emergency services, and from other fel­lows, who were generous in sharing ideas and information.

“Developing business relationships is what will make my dream come true because working with other people is very empowering,” Mr. Koetlisi said in an email. “I am very glad to work with any organization in Iowa or other states.”

After two years of visits by Mandela Washington fellows, there hasn’t been much success establishing Iowa trade ties with them. Mr. Doresca isn’t anywhere close to giving up, however.

“We would certainly like to start engaging Iowa companies,” Mr. Doresca said, “maybe take a group of them on a trade mission to Africa.”

Although he’s bullish on the continent, Mr. Doresca also had some cautionary words. He said much has been made of the growing middle class in Africa, but Americans should not think of the African middle class the way they think of the American version.

The African middle class is prospering relative to the bulk of Africans who live close to the subsistence level, he said. That means they have discretionary income to spend on things like movies and dining out, but their standard of living does not yet approach American levels.

Most of the wealth in Sub-Saharan Africa is concentrated in two countries: South Africa and Nigeria. But Mr. Doresca does not necessarily view them as the best or only countries in which to forge trade relationships.

“Nigeria is a lot to digest, and you would not want to travel alone there,” he said, mentioning that country’s diverse cultures, languages and reputation for corruption.

Although South Africa is an obvious stop for westerners making their first trip to the continent, Mr. Doresca cautions that it’s not representative of the other countries in Sub-Saharan Africa because white minority rule lasted so long.

“Senegal is a good place to start,” Mr. Doresca said. “It has a well-educated class. You can see the dynamics of Africa. Senegal is a hub for a lot of the francophone [French-speaking] countries.”

Mr. Quint and Sales Manager Brandon “Cheeze” Parizek are taking the trade mission seriously, even planning to skip a safari side-trip on the first day after arrival to run down their busy itinerary and adjust to the time change.

Although he’ll be on a new continent, Mr. Quint doesn’t expect making friends to be hard. As on his European trip, he and Mr. Parizek will be armed with cases of premium malt whiskey.

“We’re always quite popular,” he grinned. “It’s never hard to strike up interest and a conversation.”