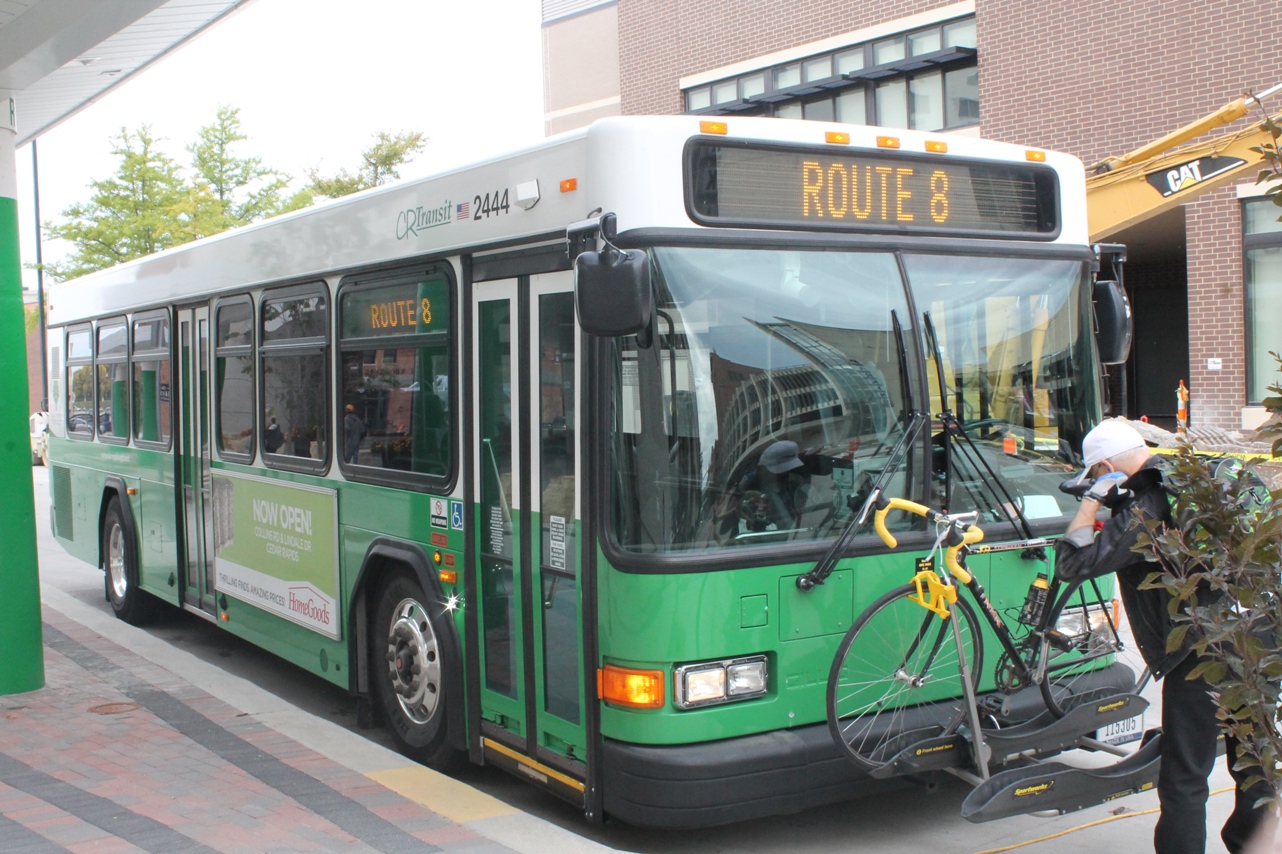 Iowa is not only having trouble funding upkeep of roads and bridges, it’s also going to face an uphill battle keeping its regional bus transit systems going without improvements in public funding.

Mr. Redfern said public transit systems in Iowa are getting a fraction of their former funding this year under MAP-21, the transportation reauthorization bill signed into law by President Obama on July 6, 2012. He said the drafters of the bill took $562 million out of the $984 million competitive Bus and Bus Facilities funding program, creating a net loss of 57 percent of the federal funding dedicated to bus equipment and facilities.

“Unless we get this back in line, there are going to be bus systems going out of business or running out of equipment,” Mr. Redfern said.

Mr. Redfern led efforts to form the Bus Coalition, a group of 65 bus systems across the country seeking to restore adequate funding for bus equipment.

The bill came out of the Senate Banking Committee, Mr. Redfern said, influenced heavily by the political concerns of densely populated Northeastern urban areas that rely on rail. He said legislators in Iowa are unlikely to approve rail funding to address urban transportation needs in places like Cedar Rapids and Des Moines.

Mr. Redfern was unreserved in his praise of Mr. Harkin for his active role in pursuing transportation funding for Iowa’s needs, and said that U.S. Sen. Chuck Grassley, R-Iowa, has worked hard alongside Mr. Harkin and Mr. Latham to keep transit funding flowing to Iowa.

“We had a good team going,” Mr. Redfern said.

Public transit provides an economic transportation alternative for the many Americans who are prevented from driving their own cars for many reasons, ranging from financial difficulties to disabilities.

“They won’t get off their duffs and get the necessary funding to replace aging infrastructure,” Mr. Redfern said. “Congress has become dysfunctional.”

Mr. Byrnes talked about Iowa’s deteriorating roads and bridges, due to failures to raise federal and state gas taxes over an extended period.

“I even have school districts now that will bring me in before their session starts and one of their platforms as a school district is road funding, ‘because their buses are taking a beating,’” Mr. Byrnes recalled. Many have had to add miles to their school bus routes to go around embargoed bridges, and he added that no school superintendent wants to be the first to have to call parents when their children are on a bus that falls through a bridge.

The shortfall in motor fuel tax funding passed through to the counties and cities has resulted in more than 25 counties that have used bond indebtedness to fund some of their upkeep on their roads. An ongoing survey of counties is expected to show that more than 40 of them have now borrowed over $200 million, Mr. Byrnes said.

The City of Vinton last year bonded for $2 million for upkeep of roads last year, he noted.

Although bonding may be the only option for some local governments, Mr. Byrnes said it’s less fiscally responsible than raising the motor fuel tax because the bonds will have to be paid back with interest that adds no direct benefit for taxpayers. By the time the bonds are paid back, Mr. Byrnes said, many of the roads and bridges will be facing another round of costly repairs.

Iowa’s motor fuel tax is “constitutionally protected,” Mr. Byrnes said, and cannot go to such highly public projects as recreational trails and new interstate highway rest areas, which some critics have pointed to as wasteful. He said many suspect funding uses are the result of federal directives, and he echoed some of Mr. Redfern’s criticisms of Congress.

Two proposals to increase the motor fuel tax put forward in the last legislative session failed to advance, Mr. Byrnes said. One would have increased the tax by 10 cents, while the other would have added five cents and a 6 percent excise tax. Mr. Byrnes stressed the advantages of the latter proposal, which would have the benefit of raising more revenue as motor fuel prices rise, and avoid the need for repeated enactment of legislation.

The last motor fuel tax increase in Iowa occurred in 1989, raising the tax to its current 22.5 cents for diesel fuel, 21 cents for regular gasoline and 19 cents for ethanol blended gasoline.

Both of the speakers urged Iowans to take up transportation funding with their elected representatives.

The conference opened with a message from State. Rep. Rob Hogg, D-Cedar Rapids, who said finding better transportation solutions is vital to our country’s security and economic competitiveness and sustainability. Despite the natural gas boom in the United States, he said the U.S. still continues to rely on tremendous amounts of imported oil – 2.8 billion barrels in 2013. He added that countries that compete in agricultural exports with Iowa are rapidly becoming more efficient exporters by improving their transportation infrastructure.

Speakers also discussed the important roles public transit plays in improving health care outcomes as more procedures and services are performed on an outpatient basis, and in improving the quality of life for Iowans with disabilities.

The all-day event was co-sponsored by Mercy Cedar Rapids and the Iowa Department of Transportation.