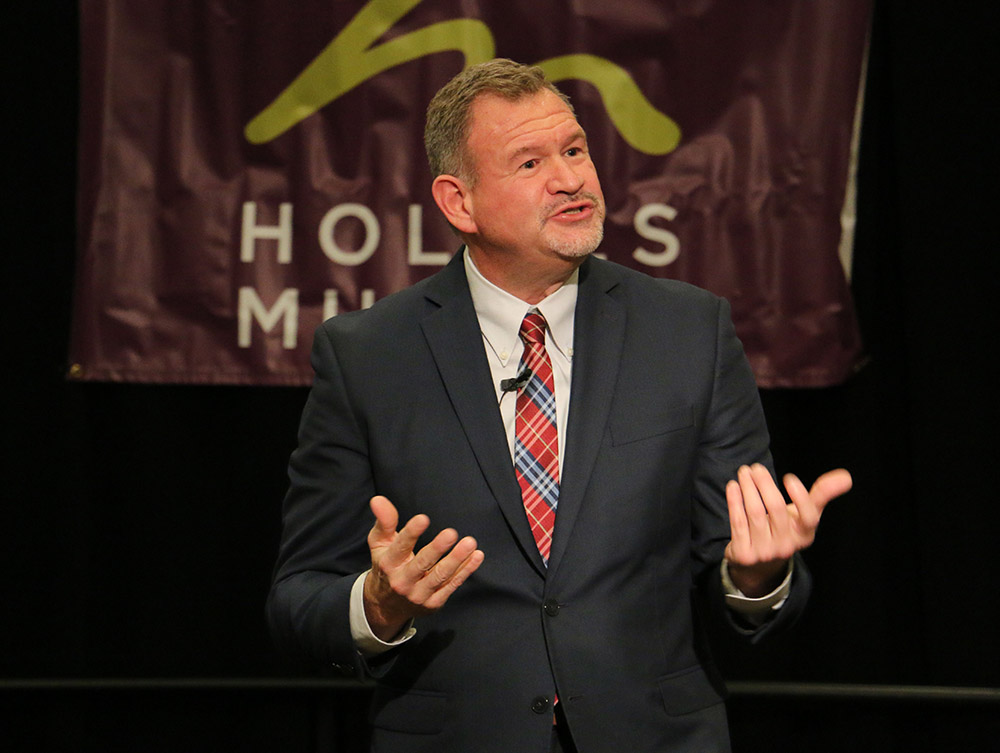 Although Casey Chosewood, director of the federal Office for Total Worker Health, is a strong proponent of employee wellness programs, he knows of a more effective approach that many employers are overlooking.

“The biggest opportunity to make work a health-producing experience is to change the nature of the job itself,” Dr. Chosewood said in a keynote speech to the CBJ’s 2019 Health Care Summit, held Feb. 8 in Cedar Rapids.

Employer wellness offerings such as fitness center memberships, smoking cessation classes and onsite nutritional counseling all help, he said, but research shows the biggest gains come from designing jobs so they cause less stress and fewer injuries.

The Office for Total Worker Health is part of NIOSH, the National Institute of Occupational Safety and Health, which defines total worker health as “policies, programs and practices that integrate protection from work-related safety and health hazards with promotion of injury and illness prevention efforts to advance worker well-being.”

For most employers, the goal is to simply keep workers safe and healthy on the job so that they go home at the end of the day with the same level of health.

“But the best companies, the ones that get it right, are the ones who build health-producing opportunities into the nature of the job itself, by designing jobs that actually in and of themselves can produce health benefits,” Dr. Chosewood said.

“It’s much easier for us to talk about individual health behavior change, about stop-smoking programs, about changing dietary habits,” he continued. “It’s harder to think of ways to design the job so it still produces whatever your company’s product or service might be, but as an additional take-home benefit produces health, as well. That’s the real promise and the secret sauce of total worker health.”

The work life of the typical long-haul truck driver is one area ripe for improvement. It’s an occupation in which the obesity rate is 70 percent due to the job’s sedentary nature, stress, boredom and constant need for vigilance.

“It’s because the very nature of the way the work is designed, your take-home benefit is obesity,” Dr. Chosewood said. “It’s part and parcel of the way that job is designed.”

He described a program in Nevada using autonomous driving technology that removes some of the stress and boredom by allowing drivers to take their eyes off the road and alerting them when they need to resume manual operation. It’s long enough to allow drivers to make phone calls or even watch movies, making the job less boring and stressful overall.

Although some drivers are still driving 12-hour shifts, Dr. Chosewood said the trial program is already demonstrating improvements in worker health due to a reduction in stress.

Redesigning jobs to make them healthier is a big challenge, Dr. Chosewood acknowledged, but there are three relatively simple things companies can do to influence worker health that are not as complex:

Given the opportunity as a company manager to spend $100 per worker to improve employee health, Dr. Chosewood said he wouldn’t spend it on another wellness component, but on better supervisor training.

Paid sick leave is another worthwhile investment for employers. He said companies typically save $375-$1,300 per worker per year by adding paid sick leave policies, as injury and illness rates decline.

“They [employers] believe if you have paid sick leave, you’ll have more people take advantage of paid sick leave,” he said. “In actual fact, the opposite happens. It’s something about the trust that’s built, [the feeling that] my employer cares for me.”

A medical doctor with a master’s degree in public health, Dr. Chosewood described some of the larger workplace trends that are eroding worker health.

Between 2005-2015, nearly all the jobs created – 94 percent – were “nonstandard,” meaning that they were not permanent jobs with benefits such as sick leave and medical, dental and vision insurance.

“That is a major threat to the health of the nation,” Dr. Chosewood said, because employer benefits have “raised the boats” of so many Americans. They have helped equalize health and wellness opportunities for the lower and middle class, he said, but a growing number of workers lack them.

Because so many jobs in the “gig economy” don’t pay enough to support a middle-class lifestyle, Dr. Chosewood said more and more workers are stringing together two or three jobs to make ends meet, contributing to “time poverty.” That means they have less time to care for their own health and personal needs, and those of their dependents.

Technology that monitors human output and performance is also changing the nature of work, Dr. Chosewood said, adding more stress to the job by constantly pressuring employees to perform.

“While there are productivity gains, there is a human price to pay for that kind of invasive technology,” he said.

NIOSH is addressing total worker health in a variety of ways. A health assessment tool under development with several dozen questions will enable employees to evaluate the health of their workforce in a standard way that can be compared over time, across companies and industries, and even by wage levels and occupations.

A two-hour supervisor training program is also under development to help teach supervisors to “supervise for health.”