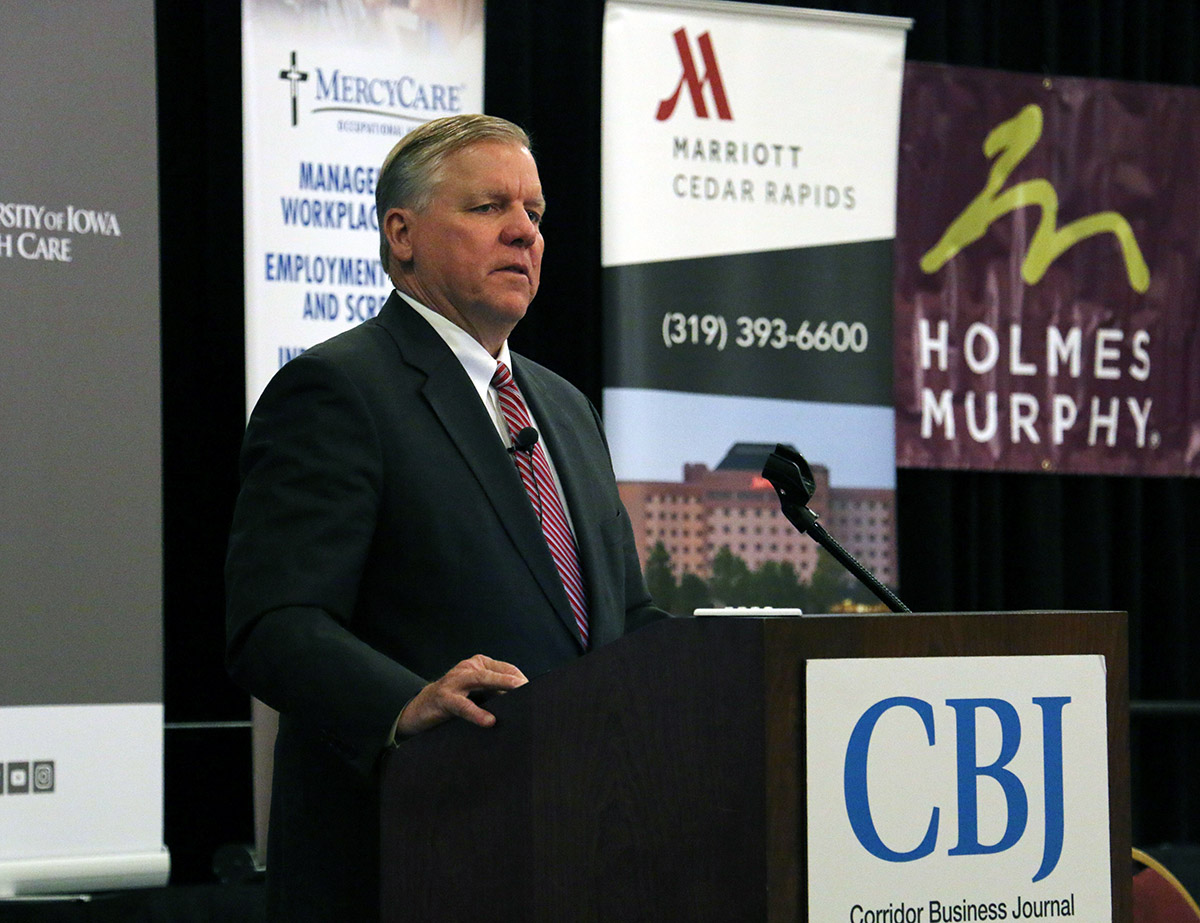 Iowa is in fairly good shape when it comes to the overall state of health care, but that doesn’t mean the outlook is entirely fa­vorable, with costs mounting, a widening gap between rich and poor, and an acute shortage of doctors and nurses to over­come in the years ahead.

That’s the diagnosis of Kirk Norris, president and CEO of the Iowa Hospital Association, who offered a birds-eye view of Iowa’s health care landscape as part of his keynote address at the CBJ’s annual Health Care Summit, held Feb. 8 in Cedar Rapids.

“In large part, Iowans take for granted the quality of care that they receive here,” said Mr. Norris, whose organization rep­resents 188 community hospitals in both urban and rural areas. “Uniformly, Iowa performs very well on about any kind of metric you want to put on health care pro­viders and community hospitals.”

All of that adds up to Iowa being the kind of place seniors who’ve moved out of state to places like Arizona and Florida re­turn to for coordinated, personalized care.

“We certainly have challenges in Iowa,” Mr. Norris acknowledged, pointing to health care affordability as a top concern. One in three Iowans report they could not access health care in the last year because of cost, nearly 30 percent said health care expense were the biggest concern facing their family and about 25 percent of those taking prescription drugs had difficulty paying for medications.

“Particularly, think about those du­al-eligibles [patients eligible for both Medicaid and Medicare] and those se­niors,” he said. “There are folks making a choice between can I eat, or can I get this prescription filled?”

Mr. Norris said the Affordable Care Act has reduced the state’s uninsured rate by more than half, from 9 percent in 2008 to just over 4 percent in 2017 – “that level that people will tell you is full coverage,” he noted. At the same time health care practitioners are emphasizing preventative and comprehensive “whole person” care and average life expectancies for men have increased six years since the mid-1970s.

While that’s good news overall, the ACA’s Medicaid expansion resulted in an additional 150,000 Iowans being covered, including some of the state’s most chronically ill – and costly – patients. Mr. Norris said Medicaid now covers one in seven adults, three in eight children, four in nine nursing home residents and half of those with disabilities.

Roughly two-thirds of the Medicaid pool are mothers and children who do not consume many health care dollars, he said, but the remainder are among the sickest and most severely disabled Iowans.

“I don’t think anybody with a good job and benefits would trade not having a job with being on Medicaid,” he said, adding that Iowans who are unemployed or among the working poor have less access and time for preventative care like regular doctor visits and blood pressure and cholesterol screening.

“The higher your education and the higher your income level, the more likely you are to have routine access to things that will positively impact your health,” Mr. Norris noted. “Otherwise, you’re probably paying attention to things like getting your car fixed or getting cell phone access.”

Access to high-quality care and socioeconomic factors are just part of what hospitals and providers are looking at as they increasingly shift from fee-for-service to a more holistic value-based payment model aimed at reducing costs by evaluating the entire patient experience. That means factoring in “social determinants of health,” such as a patient’s physical environment at home and work, family and social supports, and lifestyle choices like smoking, diet and exercise.

“There’s no denying [smoking and alcohol abuse] impact your health, but if you look at it as it relates to social and economic factors and access to health care, it’s not as important as those,” Mr. Norris said. “Moving away from being getting paid per procedure to being paid for value involves actively monitoring these types of things for individuals in your community and engaging in programs that are helpful.”

Mr. Norris identified the “Triple Aim” framework of improving health, lowering costs and providing better care as one of the biggest challenges facing hospitals as they move to the new payment model – a challenge they are largely meeting, with federal data indicating hospitals have held price growth under 2 percent for the past four years.

A thornier problem will be addressing the state’s nursing and physician shortages. Mr. Norris said the United States will need to produce more than 1 million new registered nurses by 2022 to fulfill its health care needs. Meanwhile, the state faces a physician shortage by 2030, with more than a third of all currently active doctors due to hit retirement age in the next decade.

“We have a hard time retaining the specialists we need,” Mr. Norris said, adding that the wait time in the Des Moines area was between six and eight months for some non-urgent procedures. “And not only are we facing retirements, the burnout rate is very high because it’s a very intense, very stressful job.”