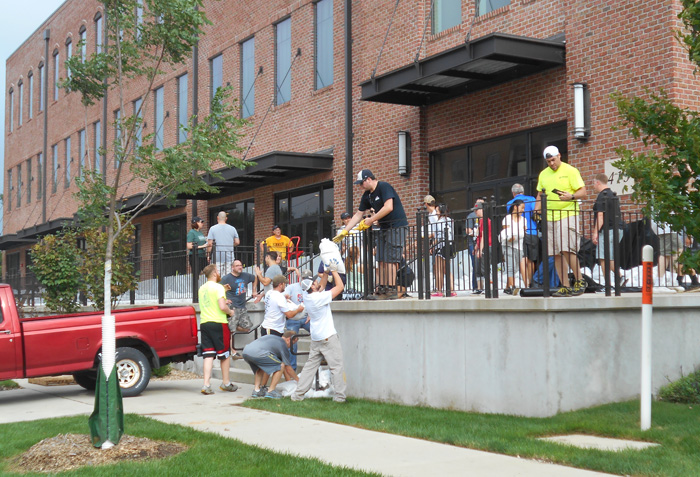 Foremost in that ongoing recovery is flood protection, of particular concern in light of this year’s late-spring floods.

“That is our biggest challenge, long-term: getting flood protection for both sides of the river,” Mr. Corbett said. “This flooding issue isn’t going away.”

Cedar Rapids, along with Iowa City, Coralville and the University of Iowa, were among the areas to set flood plans in motion as high waters posed renewed threats near the five-year anniversary of the 2008 floods.

In Cedar Rapids, concrete flood walls, earthen levees and other forms of protection will likely come piece-by-piece at a cost of more than $290 million, with the city’s forthcoming amphitheater one example of assembling the great puzzle, Mr. Corbett said.

The floodable amphitheater, being built into a levee on the west side of the Cedar River near the police station, is expected to open in August, but construction of permanent flood walls on both sides of the river could still be another decade away.

Mr. Corbett noted that working with the U.S. Army Corps of Engineers takes considerable time. Other portions of recovery, such as property buyouts and rebuilding public buildings, are nearing completion.

“We’re well over 90 percent of the way done, as far as flood recovery,” he said, citing repopulating neighborhoods and putting property back on the tax rolls among the remaining challenges.

The flood left its permanent mark on Cedar Rapids, with the city’s website pointing to that monumental event, along with progress made in the past five years.

On June 13, 2008, the Cedar River crested to its highest level in Cedar Rapids history, at 31.12 feet, surpassing the previous record of 20 feet. The river crested earlier this month at 18.2 feet, with relatively minimal flooding.

More than 18,000 people were living in flooded neighborhoods, with flood damage to 7,198 parcels, including 5,390 homes and 310 city facilities.

While 1,360 jobs were estimated lost as a result of the flood, Mr. Corbett noted that one of the high points of recovery is the amount of private investment leveraged during the past five years.

The streetscaping of Third Street SE, in the New Bohemia district is a prime example of how the city’s investment in a neighborhood led to further development, he said, citing the reopening of CSPS, the new NewBo City Market and software company Geonetrics’ plan to construct a 45,000-square-foot office building at 415 12th Ave. SE.

Other victories can be seen in the reopened Paramount Theatre, new city convention center, forthcoming city library and a long list of other projects.

With more than $848 million in estimated damage at the time, Iowa’s 2008 floods and tornadoes were considered the sixth largest disaster declaration in the United States, based on estimated financial public assistance from the Federal Emergency Management Agency (FEMA).

University of Iowa spokesman Tom Moore said the campus sustained even more damage than colleges hit by Hurricane Katrina in 2005.

“Our damage, as far as universities affected, was among the worst, if not the worst in the history of the nation,” Mr. Moore said.

Estimated expenses total more than $803 million, with the replacement of Hancher Auditorium and the School of Music topping the list.

The UI provided the following list of major flood-related projects:

Since the 2008 floods, the UI has prepared itself for future flooding, some of which was put in motion in late May and earlier this month, Mr. Moore said.

Mayflower Residence Hall was evacuated during the latest flooding threat late this spring, even as Iowa City works on plans to elevate Dubuque Street, in front of the building. The higher level will allow traffic to pass, even when the river gets high, and will allow safe access to Mayflower.

Iowa City officially bought out its last home related to the 2008 flood this May, said David Purdy, community development planner for Iowa City.

“It always takes longer than people want,” Mr. Purdy said. “Looking back, I think it’s been a good (recovery) project.”

The city demolished 90 homes and will demolish the final one in less than 90 days. Many of those homes were on Eastmoor, Manor and Normandy drives. Mr. Purdy pointed to one building the city decided against demolishing: the historic Ned Ashton house at 820 Park Road.

The area where buildings were razed is becoming green space, he said, which has helped in the latest round of flooding this spring. Otherwise, two major public infrastructure projects remain, including elevating Dubuque Street, along with reconstructing Park Road bridge. The other involves closing the north wastewater treatment plant and consolidating treatment at the south plant, Mr. Purdy said. That flood-prone north site, at 1000 S. Clinton St., will become part of a riverfront park for the proposed Riverfront Crossings District.

The city bought more than 80 properties after the 2008 floods, most of which have been demolished. Mr. Larson noted that one of the unfunded projects, berms on the north side of Clear Creek and east side of Biscuit Creek, are the responsibility of the Old Town Coralville developer.

Backflow prevention to stop Iowa River and Clear Creek from flooding surrounding neighborhoods, as well as flood mitigation on Biscuit Creek and Clear Creek were completed in 2012 for about $4.7 million in Community Development Block Grants, I-JOBS funds and some local funding.

New and upgraded storm water pump stations will be completed this fall, with two $5 million CDBG grants and $715,000 in local funds.

A flood protection system along the CRANDIC Rail Corridor will be completed in 2014 at a cost of $11.7 million, with grants and local funding.

Mr. Larson said the total cost of current and completed projects was $64.2 million.