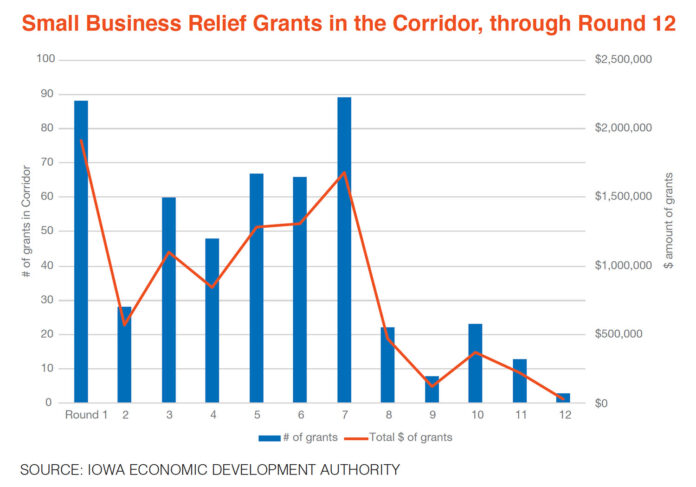 A chart showing the number of Small Business Relief Program grants to companies in the Corridor’s seven-county region through Round 12. SOURCE IEDA

State Auditor Rob Sand will review a statewide emergency grant program following questions and criticism by some of the devastated small business owners it was intended to help.

“I am looking into it,” said Mr. Sand, the state’s watchdog, of the Small Business Relief Program established by Gov. Kim Reynolds and administered by the Iowa Economic Development Authority (IEDA) in the wake of the coronavirus crisis. “When you hit a certain volume of complaints, it’s a pretty good signal you should start asking questions.”

The CBJ first reported on the controversy surrounding IEDA’s selection process in early April, shortly after it disbursed $24 million in urgent grants of $5,000-$25,000. Intended to provide a temporary lifeline to small businesses awaiting federal aid, the program attracted more than 14,000 applications requesting $148 million.

That forced the state agency to “triage” aid to the 7% of applicants it deemed most at need, and left some business owners wondering about the program’s criteria, and why enterprises with several locations received multiple $25,000 grants, while other shuttered businesses received none.

The Small Business Relief Program was recently restarted thanks to $35 million in stimulus money appropriated to the state as part of the federal CARES Act. To date, it has handed out 3,023 grants totaling $58.6 million – including 512 worth nearly $10 million to businesses in the seven-county Corridor area.

The injection of federal funding has enabled IEDA to award grants to about 21% of the businesses that originally applied so far. But that hasn’t stopped the criticism, according to Mr. Sand.

The CBJ reported on several businesses receiving multiple maximum awards, including Brown’s Shoe Fit, which received four grants for four locations totaling $87,000 in the first round of funding. In the second round, the same chain received 11 grants for 11 more locations statewide, all for the maximum $25,000, for a total of $275,000 in additional funding.

The Des Moines Register recently reported on other apparent irregularities, including a $10,000 grant to a Fairfield-based company, Panties.com, that was rescinded four hours later with an email explaining the award was made in error.

“I can say we will be undertaking a thorough review of the decision-making process to make sure every applicant was treated equally,” he said, adding that the review might be folded into his department’s regular May audit of the state, or become a separate audit. “I don’t want to give out a timeline because until you’re finished investigating, you don’t know what you’re investigating.”

IEDA officials did not return multiple calls and emails seeking comment, but agency spokeswoman Kanan Kappelman previously said that due to limited resources, it was impossible to provide assistance to everyone, noting “we know that businesses across the state are devastated and continue to endure the impact of the current crisis.”

According to Ms. Kappelman, applicants for the immediate short-term stopgap program were triaged for eligibility and economic need, including “an assessment of each applicant’s projected revenue loss for the period of March 15 to April 15 as supported by the applicant’s financial documentation,” with priority given to businesses projecting revenue losses of 75% or more, and those first ordered to close due to the statewide public health emergency – bars and restaurants.

The state endeavored, she said, “to meet the needs of as many businesses as possible for immediate relief.”

Speaking on the new federal funding to keep the grants coming at an April 30 press conference with Gov. Kim Reynolds, IEDA Director Debi Durham noted that the Small Business Relief Program had been developed and launched quickly to meet an urgent need.

“The program was put together rapidly to provide rapid relief to small business owners because we know every day that goes by is a critical one for so many Iowans,” she said, adding that “we have several thousand additional eligible businesses remaining in the applicant pool and we are working closely with the governor to be able to assist as many of them as possible in reopening stronger than ever.”

Ms. Durham said the IEDA had been deluged with thank-you notes “pouring in from across the state,” including one she read aloud from Kalen Henderson, owner of Airport Road Vineyard & Winery in Mount Pleasant, who called the grant her business received “hope, which we so desperately needed.”

“I know this has been a huge effort in a really short amount of time,” Ms. Reynolds said in comments at the same press conference. “It has made a significant impact on our small businesses across the state.”

Corridor business owners who were turned down for grants, however, are still wondering why – and Mr. Sand is hoping to hear from them. He is urging those with issues to contact him at info@aos.iowa.gov.

“On our end, we can always use more information, the better to sort the wheat from the chaff,” he said.   CBJ