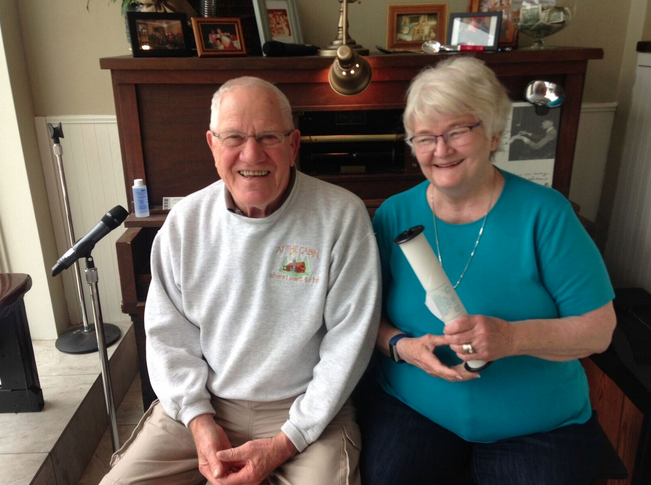 MOUNT VERNON—A good sing-a-long is just what the world needs today, accord­ing to the owner of the town’s newest pub.

Sam Jennison opened the Sing-A-Long Bar & Grill last month at 100 First St. SE, with a restored 1910 Thompson player piano as its main attraction. Guests are invited to choose a music roll from the selection of well over 200 songs, includ­ing show tunes, pop songs, standards and hymns.

Guests ask their server for a song. When the roll is loaded in the piano and their name is called, the guest comes to the piano bench at the front, where they can belt out the words from a songbook, or words that appear reversed on the rolls as the tune plays on the piano. The vol­ume of the piano helps ensure that missed notes aren’t easily noticed.

Pedestrians passing on First Street can hear the music and see the performance through the front window. Friends and fellow diners often join in, and even though the pub still pays copyright fees for playing the music, there’s no charge for the entertainment.

As a pub attraction, Mr. Jennison thinks the player piano has untapped po­tential. He has seen the Thompson bring people and voices together at countless gatherings at the former family home in Burlington, where he and his wife, Mau­reen “Mo” Jennison, raised four sons.

When Mr. and Ms. Jennison moved into an apartment in 2003, their son Joe “inherited” the piano. Joe, who is the marketing and Main Street manager for the Mount Vernon-Lisbon Community Development Association, brought the sing-a-long tradition with him to the sec­ond floor apartment where he lived above a First Street storefront, and sometimes threw sing-a-long gatherings.

“It was always in pretty bad shape,” Joe said of the piano. “It was out of tune and never worked really well, and then finally it just quit.”

Joe contacted Don Winchester, a piano specialist in Cedar Rapids, who estimated it would cost about $10,000 to restore the Thompson with new hammers, strings, hoses and electrical parts.

After long and thoughtful consider­ation, Joe decided the piano was one of the things in life that really meant a lot to him, and gave Mr. Winchester the go-ahead.

He was surprised not too much later when he was invited by longtime friend Kim Benesh to dinner at Si Senor in Mount Vernon, where he was greeted by dozens of friends and a check for $2,500 to help with the restoration. Ms. Benesh had post­ed an appeal on Facebook for those will­ing to help Joe pay for the restoration job, and 70 families wrote checks.

The restoration took about one year, with Mr. Winchester mailing out entire components of the complex electro-me­chanical piano to be reworked before re­assembling and tuning it.

The idea for a pub arose after Joe told his parents about the 163-year-old brick build­ing at the southeast corner of First Street and Highway 1 that was for sale, and seemed to have lots of potential. It had a nicely renovat­ed second-floor apartment, and Joe thought his parents could purchase the onetime ho­tel building as an investment and rent out the ground floor to a business.

Joe was surprised when his then 83-year-old father Sam suggested opening his own place in the building: A pub with a player piano theme. Everyone liked the idea, and Joe agreed to lease the upstairs apartment to help make the investment pencil out.

Ms. Benesh agreed to manage the restaurant. They developed a simple menu of hearty pub fare, including some signa­ture offerings such as slow-baked ham and beans and savory tomato pie. The sandwiches and dishes were given local names, such as the Lincoln Highway Tuna Melt, denoting the city’s spot on the first paved transcontinental highway; the King Chapel Grilled Cheese, referencing the most prominent building on the nearby Cornell College campus; and the Ivanhoe Hand-Breaded Zucchini, a homage to the once-promising community on the Cedar River to the south that has since faded into history.

The piano has been a kind of a good luck charm for the family. Ms. Jennison bought it used with her first real estate commission in 1973 for $600, and when Sam came home from work that night, he was amazed to find his wife and four sons singing along to a piano in their basement.

“That piano has been used so many years among our friends and family,” Ms. Jennison said. “Our kids loved hospitality. The song ‘Chitty-Chitty-Bang-Bang’ was their favorite.”

Joe agreed. After his regular job, he comes down to the Sing-A-Long nightly and helps out.

“We get a lot of requests,” he said, naming Billy Joel hit “Piano Man” and Don McLean’s “American Pie” as favor­ites. The song rolls are set out sequentially on shelves so that guests can choose, with show tunes on the top, pop songs on the second shelf, oldies on the third shift and hymns on the fourth.

The old piano shows a side of guests that they rarely let out, and brings people together, Joe said, adding that his only lament so far is that more guests don’t pick his favorite oldies, like “Tea for Two” and “I’ve Got a Girl in Kalamazoo.”

One other thing the Jennisons are not satisfied with regarding the new space is its size, which offers seating capacity for around 60. They have acquired two par­cels behind the building to the south, which they may demolish to allow them to extend to the building. The expansion would provide ground floor space for the restaurant, space below it for parking, and a rooftop dining area, Sam explained.