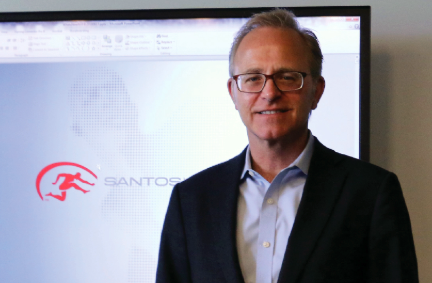 Steve Beck, president and CEO of SantosHuman, located in the University of Iowa’s BioVentures Center, says the company’s human-centric approach to product design can save manufacturers millions in lost time and costly redesign. PHOTO KATHARINE CARLON

Manufacturers spend millions building better mousetraps, but rare is the company that stops to consider the mouse.

Enter SantosHuman, the Coralville-based “niche market engineering software” spinout that aims to turn the traditional product design and engineering process on its head by encouraging manufacturers to take a close look at the mice – in this case, the world of potential end-use customers – before ever committing pen to paper or plan to prototype.

“Find something that somebody manufactures that doesn’t ultimately require human interaction – you can’t do it,” said Steve Beck, president and CEO of SantosHuman, which claims to offer “the only software on the market that can predict human performance based on the physics of the human body.”

“You would not believe the amount of effort that goes into the design of a light bulb, because it seems silly, but somebody’s got to screw that sucker in,” Mr. Beck said, adding that his company’s technology, which uses predictive mathematical modeling of human strength, fatigue, flexibility, balance, vision and posture, as well as external factors such as environment, clothing and gender, can help.

Spun out from the University of Iowa’s Virtual Soldier Research program founded in 2003 by Karim Abdel-Malek, SantosHuman builds on a system first created to help the U.S. military test vehicles and weapons in the virtual world instead of out in the field. Now, though, in addition to helping the military save millions on tanks, the technology is helping manufacturers better design everything from heavy machinery and automobiles to detergent bottles and everyday consumer goods.

“Everybody that makes anything that ultimately requires human interaction should be using our software,” said Mr. Beck. “We can look at the human-centric components of a design at the earliest stages of product development, so that we can inform and support decisions at those stages when change is still an option.”

Unlike competing digital human models in the marketplace, which rely on pre-recorded motion capture data, SantosHuman’s model is physics-based; its avatars behave as autonomous humans capable of predicting real-life interaction with products and processes. The difference allows for a multitude of simulations under different conditions as well as differences in human size, mobility, range of motion or strength.

“If you want to know something about apples falling from a tree, one approach could be, well, let’s record all the apples falling off from all the trees in this one particular orchard and record all that data,” Mr. Beck explained, adding that while such a study is useful, it is also limited. “But what if you go to a different orchard or it’s really windy, or what if you are talking about coconuts?

“In our case, we can add all kinds of constraints, like the need to see what you’re doing, avoidance of collision with things in your environment, external forces, changing the angle of motion based on the clothes you’re wearing – whatever you want, that’s the beauty of this approach.”

Digital human modeling is slowly gaining a foothold in the market, but auto and heavy equipment manufacturers – an industry that hits Santos’ “sweet spot” due to their high costs and liability – still tend to rely on traditional development processes where a few prototypes are built at great cost to the company, followed by live human studies to test them out. Those studies can cost up to $30,000 per human test subject per study, Mr. Beck noted, not including the cost of future refinements and prototypes.

It’s a design process that took hold in the ramp-up to World War II and still hasn’t evolved much. It often results in a product that is merely the “least bad” instead of optimized for a variety of users.

“It was, ‘Come on, we’ve got to build planes and tanks, and get it out there,’” Mr. Beck explained. “[For a fighter plane] it needed to go very fast, be very nimble, carry a lot of gas, be able to fly a long distance, and it had to be able to shoot things. Those are really hard engineering questions, but once that was figured out, no one worried much about who flew it. There were 100,000 guys, so they picked one and shoved him in the seat.”

All these years later, however, most manufacturers are still front-loading the engineering phase and worrying about human operators later.

“It is not a career-enhancing activity to say, ‘Hey, guys, we should change this thing a little bit’ at the point it’s done and it’s going to production,” he said, adding that Santos’ work with the big three automobile manufacturers and others underlines the value of bringing in human simulation at the earliest stages.

One U.S. carmaker recently told the company that the average new vehicle coming off the line has about 5,000 problems, approximately 10-20 percent of them human-related issues such as difficulty getting into and out of the car – a deal-killer for most potential buyers.

“Their data suggests that any of those problems you can get ahead of prior to production, is worth about $50,000 in savings … so we’re looking at somewhere between a quarter of a billion and a half a billion dollars’ worth of savings for one company in one year,” Mr. Beck said. “That’s the value of Santos.”

Though heavy, expensive-to-produce products like cars and industrial equipment are SantosHuman’s “bread and butter,” it has also helped consumer goods companies like Procter & Gamble improve the ergonomics of detergent bottles, for example, and may soon begin work for at least one large insurer “because we have the most accurate, extensively validated method of predicting exposure to an injury.”

Mr. Beck, who took over the reins in 2014 and kept SantosHuman from bankruptcy, has launched strategic partnerships with design companies like Altair Engineering in recent years. He has also grown the company’s university program, sharing its technology with global institutions including the University of California-Berkeley, the University of Ontario Institute of Technology and Politecnico di Milano in Italy. And he discussed several large new clients on the way, though hesitated to cite them by name, predicting exciting days ahead for the future of digital human modeling as manufacturers grasped its time and cost savings.

“It feels a little bit like we’re surfers who have gone out on the waves a little too early,” he said. “Right now I can see it coming, and we have just got to keep the company alive until the water crests. But it’s going to crest.”