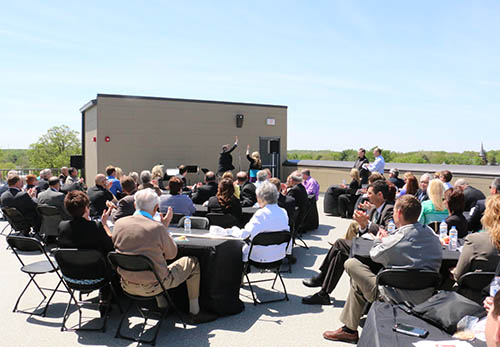 MARION—Sometimes a community is growing and developing so fast that it’s easy to lose track of all the moving parts – a problem that city leaders addressed May 13 at ‘High Five Marion.’

The luncheon event, organized by Marion Economic Development Corp., the city of Marion and the Marion Chamber of Commerce, brought 120 residents to the rooftop dining area of the new Philip’s Diamond Center to discuss developments under way, from new retail and mixed-use buildings in the city’s central corridor to the municipalization of the Marion Airport.

The setting and the clear spring weather provided the perfect compliment, considering that a good part of Marion was visible from the rooftop of the city’s newest downtown storefront.

“Take the opportunity to look around, because I’d say that in the next five or 10 years, the view from here is going to be a lot different,” said Hannah Kustes of Genesis Equities.

City Manager Lon Pluckhahn’s list of discussion topics focused heavily on what he called “the urbanization of our downtown.” He said development will be going vertical with multi-floor buildings more typical of the early 20th century, and new parking structures that will provide shoppers and visitors with better access.

The city of Marion is currently working with a pair of Iowa City developers on a proposal to redevelop a half-block area facing 11th Street behind Irwin’s Clothing into a development that would include 9,000 square feet of business and commercial space and 9,000 square feet of residential space. The city also is working with the developer on a parking ramp that would add about 330 parking spaces, which would more than double what’s available in the current 328-space ground lot.

Three buildings on the site, including a professional office building and tattoo parlor, would be removed.

The city manager also explained why the city is working with Ryan Companies on a plan to develop a mixed-use project with a new 40,000- to 45,000-square-foot public library, residential living and a grocery store.

Library operations are beyond the capacity of the current 24,000-square-foot facility, which could not be expanded without replacing its floors, roof, and heating and cooling system, Mr. Pluckhahn said. Having a grocery store would also eliminate a barrier to some state grant programs that now prevent applications from downtown Marion because it is too far from a grocery.

The Art in the Alley project in downtown Marion has been put off for another year in order to raise more funds and complete the infrastructure for a truly impressive project that will bring credit to the community, according to Karen Hoyt, project director.

“I know some of you will be disappointed you’re not going to see a lot happening this summer,” Ms. Hoyt said. However this weekend, the Alley Gallery will open in the painstakingly restored Memorial Hall building at 760 11th St., according to Jeanne Matthews, who undertook the project with her husband, Paul. She said an Irish-themed pub, Uptown Snug, will open at the rear of the space this fall, and will have an outdoor patio area.

Other speakers included Bob Bowman of Legacy Manufacturing, which is building a new $10 million factory in the Marion Enterprise Center, and Tim Mooney of Mooney Engle Land Co., LLC, which is leading development efforts in the Tower Terrace Road extension corridor.

Mr. Mooney said the next stage of construction on the extension will be from 10th Street to Winslow Road, and another $5 million in investment is expected to be announced in the area in the next few months. Efforts are also under way to identify a site for the new Function and Fitness project, which will feature a 90,000-square-foot recreational complex.

“It’s going to be a beautiful thing,” Mr. Mooney said. “It will have components for the city and the YMCA.”

Ms. Kustes said the Marion Iron site will be cleaned up over the next several months, and “will open the door for a lot of new businesses and a general cleanup” in the city’s central corridor.

At Lincolnview Square, Ms. Kustes said a 44,000-square-foot office building, 12,000-square-foot retail building and another stand-alone building will be added to the new businesses already at the former Marion Shopping Center site.

The city has applied to the Iowa Department of Transportation for grants totaling $750,000 to use for acquisition of the private Marion Airport, according to Ms. Kustes. An answer is hoped for in June or early July, potentially allowing work to start on the city’s airport plans this summer.

According to Mr. Pluckhahn, plans call for the city to own a minimum of the airport property and expand the current runway. Most of the surrounding land will be left for development by Ms. Kustes’ group, which will also become the airport’s fixed base operator, providing fuel and services. The flight school ownership will remain with Jan Walton, the current airport owner.

By keeping most of the airport land private, Mr. Pluckhahn said it would encourage private investment by aircraft operators who could have long-term ownership of their own aircraft hangers.