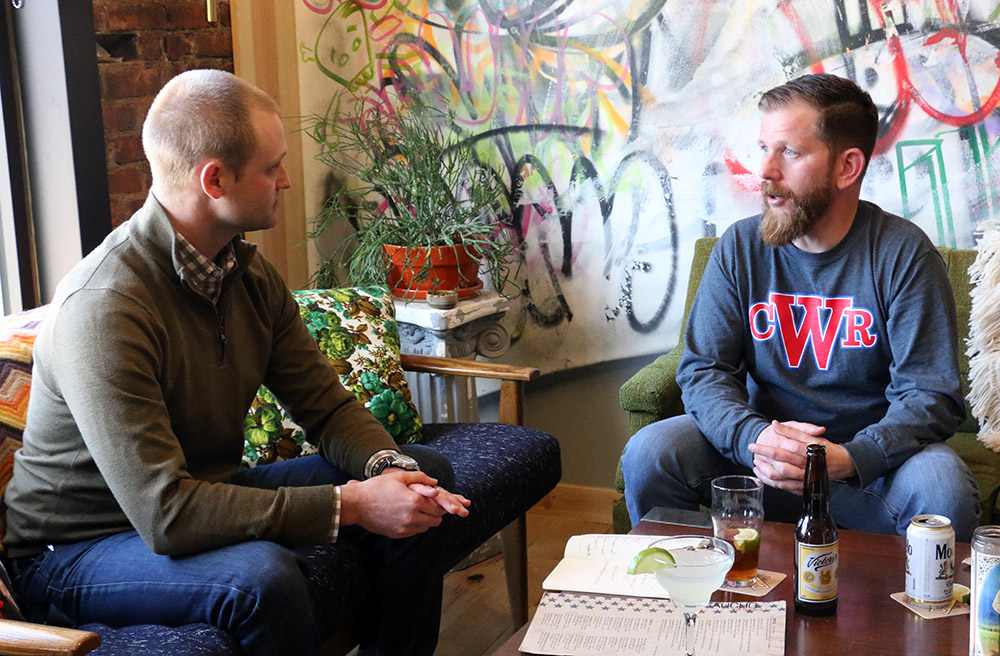 Ed. note: Sponsored by West Bank, this is the latest edition of the CBJ’s new Q&A feature with Nate Kaeding and notable Iowa business and cultural leaders, available first to CBJ members. Read more about the idea for the series here, and watch the video interview below or at the CBJ’s YouTube channel.

David Tominsky knows ideas. As the managing di­rector of the Iowa Startup Accelerator at NewBoCo in Cedar Rapids, he has stewarded dozens of budding entrepreneurs through the process of trying to connect their idea with a viable business model. But as David reminded me, even though every business is born as an idea, not every promising idea becomes a success­ful business. In fact, bad ideas can be a good thing – just as long as the owner of said idea has the emo­tional intelligence and humility to identify it as such and correct course accordingly.

David and I caught up over a few margaritas at Caucho, the hip Mexican restaurant located right next door to his NewBo office, and talked about his critical work in building the local entrepreneurial eco­system, as well as his thoughts on ideation, innovation and the never-ending quest for improvement.

NK: Entrepreneurship and innovation seem to go hand in hand. The terms are thrown around so of­ten, it’s interesting to break them down. What’s an entrepreneur? What is innovation? Can you be a small business owner and not be an entrepreneur, or not be innovative?

DT: Entrepreneurship to me is about risk-taking, so to an­swer your question, there is a difference between a small business owner and an entrepreneur – not always, but that appetite for risk is a big part of what it takes to be an entre­preneur. The companies that we’re investing in as part of the Iowa Startup Accelerator, these are big risk-takers – peo­ple that are betting a lot on an idea, that the idea has some merit, and that it could scale and be a really big business some day. We’re investing in high-growth startups, and there’s a lot of risk and sacrifice that’s involved to make a go of that. Sometimes they’re just an idea with a little bit of revenue, but we’re looking at those companies becoming $10 million, $100 million businesses.

In your mind, as businesses iterate and make in­cremental tweaks, do those small improvements qualify as “innovation?” Or is innovation truly that eureka moment when an entirely new, game-chang­ing product is developed?

A colleague of mine always asks, “what’s the one word you think of when you think of innovation?” My one word was just improvement. I think any sort of improve­ment that you’re making qualifies as innovation. There’s certainly disruptive innovation, right? I mean, the first iPod, that was disruptive. The way that we were getting music, the way we use our phones today – those things are pretty disruptive to market. So there’s definitely dif­ferent degrees of innovation, but I think any significant improvement, whether it’s to an existing product or the creation of a new product, qualifies.

At the ISA you teach a lean startup methodology, which centers around validated learning, going out and doing customer discovery. How would you describe that process?

We definitely focus on understanding what a viable busi­ness model is. How do you identify potential customers, how do you prioritize which ones you’re going after first, and what are some of the questions you’re going to ask them? We use the term “value propositions” – what does the customer want? I think the idea in your head is one thing, but actually hearing from that potential customer, what they really want in their own words, is a lot of the focus in the beginning. And I think it’s lifelong learning for sure. There’s just so much that people don’t know, so for me, it’s about having them understand how much they don’t know and their willingness to go out there and chase the answer.

Would you say a passion for lifelong learning is a common trait amongst the entrepreneurs and business owners you’ve been around at the ISA?

I’m covering that in the interview process at the ISA. When people apply, or if I’m talking to people that hav­en’t applied … they have to be responsive. It’s about get­ting feedback, hearing things they don’t want to hear and doing something with that information?: If I’m having a conversation with them, and say, “You need to get out of the building; you need to go talk face to face with people who have a problem,” and I talk to them in a month and they don’t have anything they’ve learned from those in­terviews, it’s a sign that they’re not ready for the ISA.

I always start with the people. Who’s the customer? Who’s the person? And then it’s just throwing as many ideas up on the board as possible and figuring out what makes this one better than that one. Sometimes it’s access to people – there’s a lot more in this group than in this other group. That’s the key – figuring out if there’s a true market and people who want to buy it from you. And then it’s just a lot of research.

For an entrepreneur, it’s one thing to just always want to be on the street talking to people, but once you get enough information, you have to hunker down and actually build it. I do see people getting into that cycle where it’s just cus­tomer discovery interview after interview. At some point, you’ve learned enough to take action, so then to actually move to action and execution is critical.

That’s the critical point in any entrepreneur’s jour­ney, right? Your toes are sort of dangling over the edge of the pool, but at some point you have to jump into the deep end. How do you go from idea to action?

For me, it’s resource identification. At NewBoCo, we’re helping them figure out the resources that they need and making sure those are in line. The definition of a startup is an idea in search of a business model, so once you actually build a product and generate revenue, technically you’re no longer a startup. We’re helping them make sure they spend the time do­ing the research and the fundamentals before they start building.

We all get together with our friends and talk about crazy business ideas. Has your team created a quick, back-of-the-napkin method for evaluating the feasibil­ity of an idea?

We actually did a presentation at EntreFEST a few years ago called “Your Idea Sucks.” And it was more just about the aware­ness that the idea alone is nothing – it’s what you do with it that matters. I would recommend that if you have an idea, just be willing to accept other people’s feedback on it.

It’s funny – I don’t know what your friends are like, but mine, we throw out ideas that seem completely crazy and in a matter of minutes we talk it through. “If this was possible, this would actually make it viable.” And you’d be surprised how often you can rationalize that stuff. I think with the right people, you can take a lot of ideas and make something out of it.

But there’s also the one friend who says, “That idea sucks and here are 10 reasons it will never work.”

Yeah, absolutely – you need that friend that will poke holes in everything. If you’re just living in a bubble where the only peo­ple giving you feedback are saying, “That’s a great idea,” that’s not what you need. A lot of times it’s false validation. You hear, “Hey, all of these people told me it’s a great idea, and I went and built this thing and now nobody wants it.” That’s because those people weren’t being 100 percent honest with you. If everyone is telling you the same thing, I’d probably get a little bit nervous.

Circling back, talk a bit about how innovation can work within an existing company.

The main thing I would tell you is mindset – making sure you’ve got people who are willing to think about new ideas, not will­ing to settle for the status quo. And there are a lot of different parts to it. Our Intrapreneur Academy has a theme each quarter, such as focusing on Agile as a process, focusing on methods and some of the tools you can implement in your organization to make the process easier. But the key to it all is mindset. If you’re willing to accept that something can be better – and ev­erything can be better, nothing is perfect – there’s an opportu­nity if you’re willing to look at it closely.

What are some of the reasons companies fail to innovate?

There are a lot of reasons, but I think there are times when it’s rain­ing money, and there are times when everything is going great and you don’t want to rock the boat. It seems to me like that’s the main reason – you’ve got something that works, and you’re really not paying attention to what’s not working. If you’re paying attention to those trends and that trend line starts to go down, I think people start to get nervous. And going back to what it takes to be an entre­preneur, at the core of it is risk, and so people who are risk-averse fail to innovate.

The thing is, in today’s world, even for startups, it doesn’t take more than a few people and internet access to create a com­petitive product, so if you’re not paying attention to the way the world is changing and then adapting, at some point, you’re inevitably going to die.

Given the chance, what profession other than your own would you try?

There’s two that jump out: 5th grade teacher and fisherman.

Around here, Randy Ramlo – I just love what he’s doing with United Fire Group. Duane Smith at TrueNorth is another one that comes to mind.

I have two. The first is from a book, now being turned into a movie, “Wonder” – “If you have the choice between being right and being kind, choose kind.” The other one is “Life expands or shrinks in proportion to one’s courage.”

30 extra minutes in the day?

I would just spend it outside.

One of the first books I read in business was called “Power of Nice” – it’s about negotiation strategies so everyone wins.

How do you define success?

I try to define success by the quest for joy, not just in myself but for others. I see the work we’re doing, and that’s an opportunity to expose people to what brings them joy and help them find it.