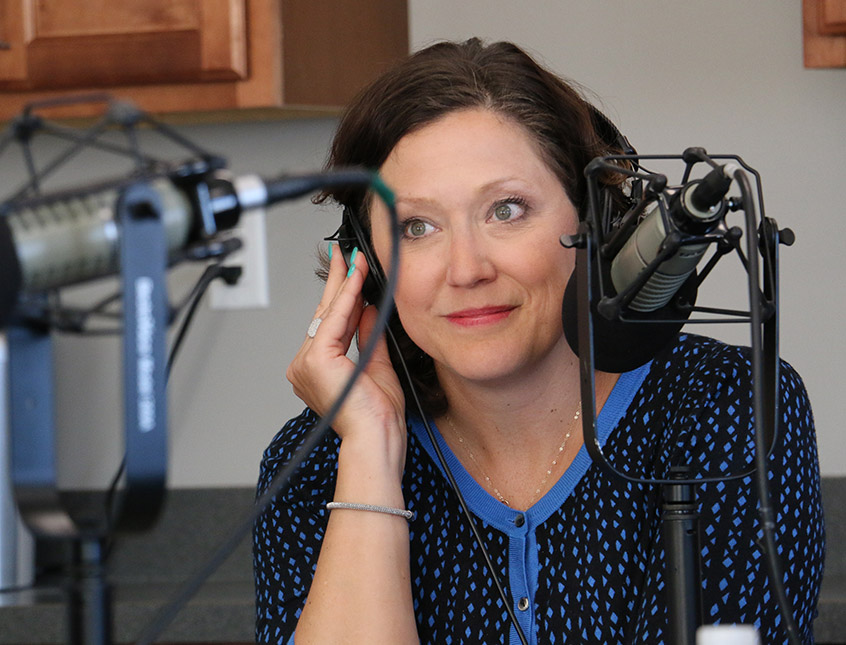 The Overture Group’s Brandi Mueller talks with Nate about the risks and rewards of starting your own business during a recent recording session at the CBJ headquarters. PHOTO ADAM MOORE

Sponsored by MidWestOne Bank, this is the latest edition of the CBJ’s new podcast feature with Nate Kaeding and notable Iowa business and cultural leaders, available first to CBJ members. Listen to this episode below, and subscribe on Spotify, iTunes, Google Play and SoundCloud.

In an economy with historically low unemployment, a re­gion with tough workforce shortages, and a search and hir­ing culture filled with stories of “job interview ghosting,” Brandi Mueller understands hir­ing challenges better than most.

She’s managing director and a founding partner of The Overture Group, a Cedar Rap­ids-based search and compen­sation consulting firm, and has built a career on helping oth­ers build theirs. She’s one part counselor, one part master net­worker and one part voice of rea­son — a level-headed ally there to take the emotion out of big life decisions and help candidates weigh the risks and rewards. Will I be a fit within the cor­porate culture? Will the job be challenging and allow for growth? How will it affect my family?

It’s a skillset she’s developed since her formative years at the University of Northern Iowa and McGladrey & Pullen (now RSM US LLP), and one honed during some difficult career choices of her own, which included taking the leap to start The Overture Group back in 2010. We talked about her own career progression, the importance of timing and honesty, and the business decisions she’d take back if she could.

Brandi, you’re in the business of people. Have you always been a people person, if you think back to your childhood and upbringing?

What are some of your memories growing up? Were your parents or grandparents business people?

What are some other memories of growing up on the farm? You were prob­ably pitching in at an early age, chasing down chickens and milking cows.

We didn’t have chickens or dairy cows. We did have animals, but one of the things that I remember growing up is that I didn’t have the luxu­ry of sleeping in.

Did you have a rooster?

No, I had my dad coming into my room saying, “get out of bed, it’s time to get up.” He didn’t like watching us not busy. We all had to play a part in making the farm operate. I will tell you that I grew up on a farm, and I’m proud of my farming roots, but I only drove a tractor once. It’s just not something I did. But I played a part. Every Saturday, I cleaned all the cars. I took part in the planting season and helped get vehicles where they needed to go.

Talk a bit about your journey through college. Where did you go to school?

So, I graduated high school in ‘94, then went to the Uni­versity of Northern Iowa. My dad would tell people that I got my degree in social networking, before social net­working was thing. My college roommates hated it, but he would call me Friday morning and say, “How was Shar­key’s last night, honey?” It was a skill that served me well. I was always networking and that was fun in college, but it also was a way of getting to know people.

Read the full interview with Brandi Mueller in the April 1 print or digital editions of the CBJ. Not a CBJ member? Join today.