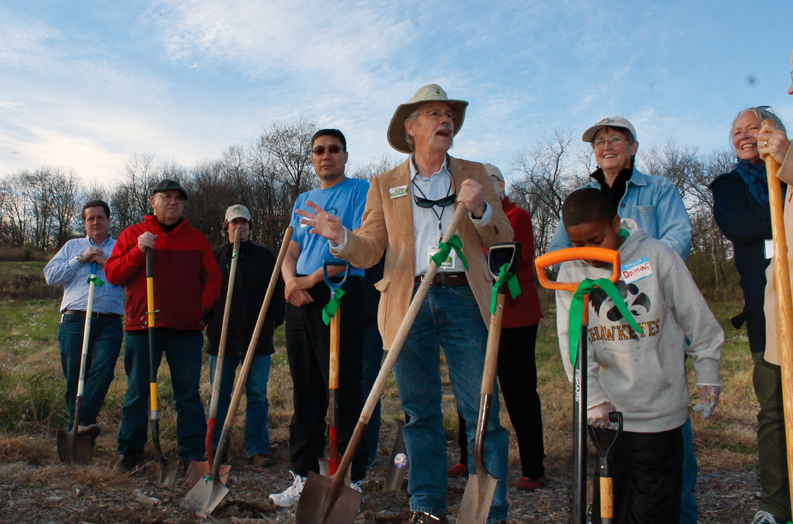 A cohousing development southwest of downtown Iowa City will provide a unique option for aspiring homeowners who value convenience over autonomy when the project opens next year.

Prairie Hill is an eight-acre cohousing development located about one block north of Highway 1 on Miller Avenue, with a western boundary shared with Culver’s restaurant. It will contain 36 attached homes and a common house as a space for shared meals and activities.

Thirteen of those 36 units have been sold thus far, all of which will be owner-occupied. The residents, meanwhile, are also the developers of the estimated $8 million project, which will feature units of varying sizes clustered around the central common house where residents can receive mail, do laundry and if desired, share meals together.

Homes will range from 515-square-foot studio apartments in the common house to 1,600-square-foot two-story duplexes with up to four bedrooms. Units will be built in clusters of two-story duplexes, four flats in two-story buildings and single-level townhouses. Cohousing also encourages residents to share resources like tools and lawnmowers, and strives to support things like child or elder care and arranging carpools.

Among the future residents at a Nov. 13 groundbreaking for the project was Michele McNabb, who was directed to the Iowa City cohousing project by a friend after discussing retirement plans two years ago. Having previously spent 17 years in Illinois’ Champaign-Urbana area, she was initially drawn to the benefits of living in another university town.

“The more I looked at it, I thought, ‘Oh, this looks like it’s exactly what I wanted in terms of a logical lifestyle and … university community,” Ms. McNabb said. “You’ve got all the benefits I’ve been missing.”

The concept of co-housing holds special meaning for Ms. McNabb, who retired this summer after 14 years managing the Museum of Danish America in Elk Horn. Denmark is often cited as the birthplace of co-housing, which has enjoyed widespread growth in Europe and is gaining traction in the U.S.

According to the nonprofit Cohousing Association of the United States, there are more than 160 completed cohousing developments throughout the country, including two in Minnesota. Prairie Hill is on track to become Iowa’s first.

Del Holland is a member of the Iowa City Co-Housing Board of Managers, a five-member board that is coordinating the development.

“Those were our values,” he added. “Some other developer might build a place and not have those, but we wanted those things, so here we are.”

Those efforts included time spent establishing an LLC, raising funds from private investors as well as area housing groups, and hiring designers for the project.

Mr. Holland said that although the majority of the planned units have not yet been reserved, he expects the units to sell out next year thanks to what he says is a strong mailing list and a network of interested potential residents.

Iowa City Council Member John Thomas voiced support for the walkability of the development. Prairie Hill is less than a block from Riverside Drive, where some of the city’s first Riverfront Crossings district improvements are slated to take shape, including widening and setting back sidewalks on the west side of the street, and adding pedestrian-scale lighting.

“We’re as a city trying to promote a vibrant and walkable urban core,” Mr. Thomas said. “And one of the subheadings under that would be to encourage diverse housing types and price points for a variety of income levels.”

As such, Prairie Hill will also offer homes as workforce housing for income-qualified applicants.

In addition to 13 private investors, the project received support from the Housing Trust Fund of Johnson County, the proceeds of which were used to purchase and clear the land. Residents who commit to the site are paying approximately 20 percent of their unit costs up front, which will be used to leverage construction. Eventually, the LLC established to purchase the land will become a condominium association, with the property held tenancy in common.

Fellow cohousing board member Barbara Bailey said the return for investors on the project is small, but gained support through a diverse range “family members, friends, interested people who just really love the concept and wanted to make sure that it happened.”

The first units are scheduled to open early next year, with priority construction placed on plots already committed. Project supporters anticipate construction will finish by the end of 2017.

Plans for the development were made by architects John F. Shaw and Martha Norbeck of C-wise Design and Consulting and HBK Engineering, both of Iowa City. The general contractor is APEX Construction Company. Great Western Bank will finance the construction.