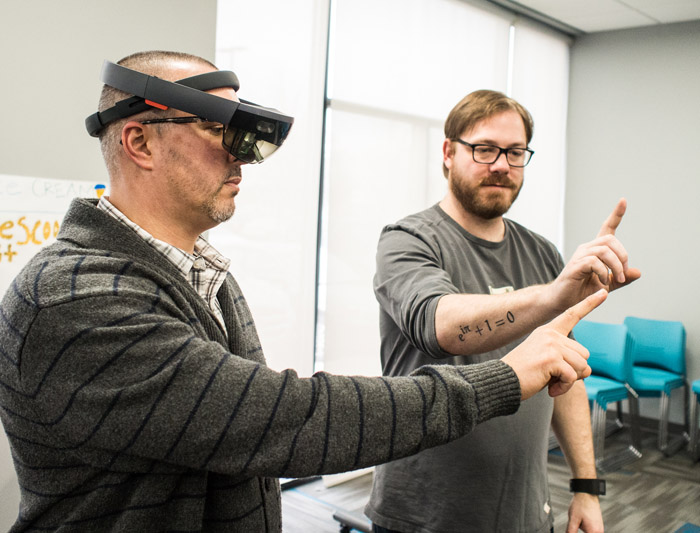 CEDAR RAPIDS—Corridor students and entrepreneurs will soon be building virtual reality environments and making 3-D prototypes with the opening of Vault Labs by NewBoCo.

The virtual reality (VR) lab and prototyping lab that opened last month at 415 12th St. SE in Cedar Rapids add a hands-on element to NewBoCo’s educational offerings in coding, entrepreneurship and program management. They also add an element of wonder for students and users of the Vault Coworking space.

Jesse Lane, a former software engineer for Honeywell, joined NewBoCo in December as engineer-in-residence. Mr. Lane recently demonstrated the VR lab by showing off a Google Earth program. The VR environment allows the users to “fly” virtually to points around the globe and view the landscape in different patterns of daylight and starlight. He explained how the users can “grab” the sun and change the time of day.

“I went to Devil’s Tower [a dramatic geological formation in Wyoming] the other day and made the sun set,” he explained. “It was amazing.”

Users who haven’t played with VR before can’t help but agree.

“It feels like I’m a god,” remarked one first-time user. “It’s just such a strange experience.”

Teams in NewBoCo’s Iowa Startup Accelerator (ISA) can use both of the labs to help investors and customers understand the products and services their ventures plan to offer. They can develop first-generation prototypes, or create an entire simulation in the VR lab to show how it would work. Teams can even load the simulation onto an inexpensive computing device such as a Raspberry Pi and ship it to investors or customers.

One former ISA team, SwineTech, recently used the prototyping lab to build components for its system that will help cut losses in the pork production industry caused by sows suffocating their own piglets.

In a stark contrast, the adjacent prototyping lab is a bright, window-filled space equipped with 3-D printers and other tools that include a 3-D scanner, oscilloscope, signal generator and a tool for routing traces on printed circuit boards. Mr. Lane expects a laser cutter to be added for fabricating metal components, and a five-axis CNC machine for machining plastics and softer materials like wood.

NewBoCo plans to use both labs for classes, but for now has scheduled a Jan. 24 meetup to introduce the VR lab to the community. The event from 7-9 p.m. is planned to bring together Corridor residents interested in VR programming, show them what’s in the lab and let them share their interests.

Among those interested in using the VR lab are some 130 high school students in the Iowa BIG School. They have been using Blender, a free 3-D modeling utility, to create virtual assets with the eventual goal of building a virtual reality tour for the National Czech & Slovak Museum & Library. By using Unity in the VR lab, they are able to take the elements made in Blender, place them in a virtual world and make them interact.

The VR world is exploding with possibilities, according to Troy Miller, director of strategic partnerships with Iowa BIG, and it’s hard to tell where the technology will take the high schoolers who have shown an early interest in VR development.

One German company, Thyssenkrupp, now sends technicians to repair elevators armed with VR headsets. When they run into a problem, a technician in the home office can view what they are seeing through the headset. The technician can also use the system to view diagrams showing the insides of elevator components as they are viewing them from the outside.

Mr. Miller and Mr. Lane say it’s easy to get students interested in VR programming, in part because many are video gamers who’d like to develop their own game.

NewBoCo plans to add prototyping and VR programming to a curriculum that already includes courses in coding and lean development methodologies. The coding curriculum came from Code Fellows in Seattle, a community-based coding school in Seattle whose graduates have landed careers with tech giants Amazon and Microsoft.

NewBoCo held a free, daylong introductory coding session on Jan. 14, and its DeltaV Code School began registration for its first 102 course aimed at helping professionals build software development skills in high demand. The first set of students in the DeltaV Code School to take the 101 level class graduated in December.

The programs don’t offer certifications, but a sequence of three courses are offered with the end-goal of producing a ‘hirable’ web developer at the end of the 401 course. They include coursework in collaboration and communication, as well as common software.

Because of the rapid pace of change in code libraries used by today’s software developers, certifications rarely keep up with the needs of industry, Ms. Bertling said. NewBoCo is using input from local industries to identify the coding skills in greatest demand.

The ISA provides teams of entrepreneurs with mentoring, instruction and a support network intended to help them launch their businesses. The new labs fill a gap in the ability of the teams to demonstrate their products, according to David Tominsky, program manager for the ISA.

“People want to touch things and be able to see what they do,” Mr. Tominsky said. Without such tools as 3-D modeling and VR simulation, he said the primary alternative has been to make diagrams and sketches on a whiteboard.

Mr. Lane said having the modeling and simulation capabilities under one roof will speed the development time for entrepreneurs at the ISA, who can easily scan and start the prototyping process with the 3-D printer, then go back upstairs to meet with mentors, work on their elevator pitches or perform other tasks. They can check the status of the job when they come downstairs for lunch, and pick up the completed model in a few hours.

The geek factor of the new labs is undeniable, and Mr. Lane said he’s become one of the more sought-after geeks in the building as the engineer who oversees them.

“The funny thing is that this is my job,” Mr. Lane said. “I’m constantly the guy in the office who has that weird thing on his head [the virtual reality headset].”

Mr. Lane has already used the system to create some fun virtual graffiti in his office area, and he’d like to build a holographic tour of the building that can provide a fun introduction to the space and the VR system.