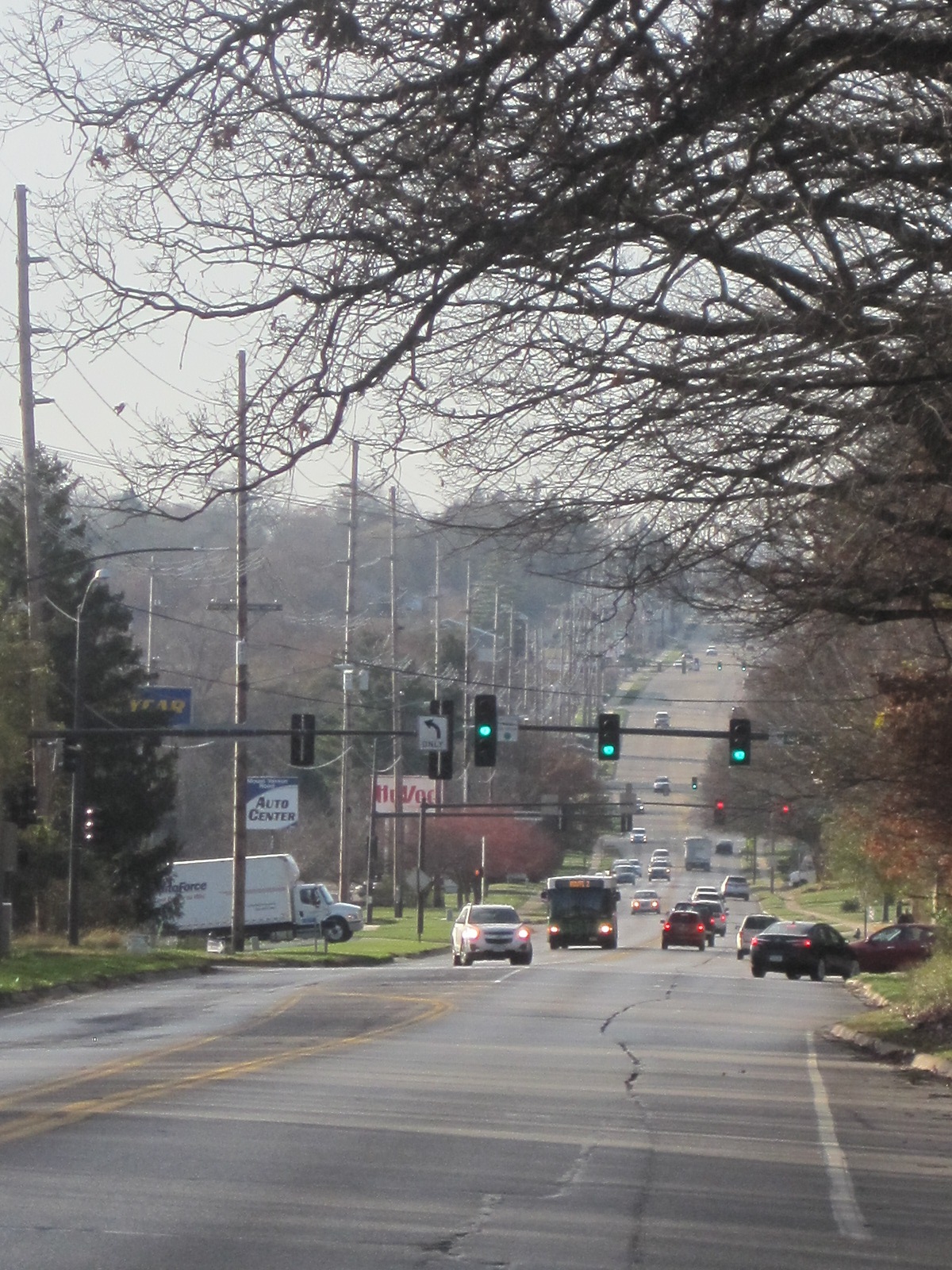 The eastern segment of the Mount Vernon Road corridor is shown looking west from the area of the city water tower. Removing utility lines and adding placemarking signs and gateways along the road are among the many recommendations expected in a new plan to be considered by the Cedar Rapids City Council. PHOTO/DAVE DEWITTE

Big changes could be in store for Mount Vernon Road in southeast Cedar Rapids, with a new city plan due out next month and major improvements planned by Linn County during the next construction season.

The Mount Vernon Road Corridor Action Plan, to be presented to the Cedar Rapids City Council on Jan. 24, could make the thoroughfare more retail- and pedestrian-friendly, among other changes. It will be the first in a series of plans intended to address the needs of major transportation corridors in Cedar Rapids.

The road is one of the busiest in the city, carrying more than 20,000 cars per day in spots. It begins east of Mercy Medical Center, winding east for three miles past the Oak Hill Cemetery, the historic Vernon Heights neighborhood, All Saints Catholic and numerous other neighborhoods dotted with small commercial pockets. Traffic tapers off after reaching the Hy-Vee store at 4035 Mount Vernon Road SE, with the corridor turning into an area of auto shops and used car dealers.

The retail enclaves along Mount Vernon Road represented at various times the eastern city limits of Cedar Rapids, according to historian Mark Stoffer Hunter of The History Center.

“There are a lot of different segments of Mount Vernon Road that have different character to them,” Mr. Hunter said. At its western end near downtown, a new Kum & Go convenience store marks an area that still contains remnants of an early Czech business enclave. At the eastern end is The Lighthouse, one of Iowa’s oldest restaurants, and a link to the highway’s colorful past as part of the first paved transcontinental route, the Lincoln Highway.

However, despite continued residential growth in the area, retail options haven’t expanded much in the past decades. The widening of Mount Vernon Road more than 15 years ago required the demolition of some retail buildings. Two longtime neighborhood restaurants, the Vernon Inn and the Cork & Fork, have since closed.

Tim Stolba grew up in the 4700 block of Mount Vernon Road where he now lives, and his family once ran a grocery in the area, called Stolba’s Sunny Crest Meat Counter. He’s among many residents who would like to have more retail opportunities without a drive across town.

“There aren’t enough places to eat,” Mr. Stolba said, adding that he’d also like to see more grocery options than the nearby Hy-Vee store.

The Mount Vernon Road Corridor Action Plan was the result of about a year of study by the city’s planning staff, with several opportunities for public input and engagement. Among the hundreds of citizen comments collected about how the corridor could be improved, the desire for more retail options was near the top.

“That was one thing we kept hearing again and again,” said Adam Lindenlaub, long-range planning coordinator for the city of Cedar Rapids. He said citizens surveyed wanted not only more retail options (39 percent), but more diversity of retail options (47 percent).

Residents were specific about their retail preferences, with many expressing a desire to minimize or eliminate stores that specialize in tobacco and alcohol products, and to keep out big-box stores like a Walmart proposed at a location south of East Post Road and Mount Vernon Road in 2014.

Vernon Village True Value at 3501 Mount Vernon Road seems to represent the kind of independent, locally owned store residents would like to see more of in the corridor. It’s within a few minutes of thousands of homes, and provides the kind of personal service big-box stores typically do not.

Phil Cronin, who manages the hardware store, spoke out during the planning process.

“What can we do to get people excited about coming to this part of town?” is the big question, Mr. Cronin said. He believes the best things the city could do to keep businesses thriving and expanding would be those that bring more people to the area. Those could include cleaning up the area visually, adding turn lanes at intersections where stopped traffic causes backups, and widening sidewalks to improve the pedestrian experience.

Beyond the desire for more retail, one of the comments planners heard most often in their study was a desire to get grain trucks off the busy four-lane road, or at least slow them down. The road is an established farm-to-market route used to haul grain from Corridor farms to buyers such as Cargill Corn Milling and Ingredion in southeast Cedar Rapids.

Mr. Lindenlaub said planners have already had to caution commenters that rerouting grain trucks doesn’t appear to be a viable option.

“It’s really the only good way into the city from Highway 13,” he noted, adding that the city doesn’t have sole jurisdiction over the route.

Among other changes in the works are the planned addition of a Hy-Vee convenience store and car wash near the recently expanded grocery store. O’Reilly Auto Parts has also acquired the former Vernon Inn site at 2663 Mount Vernon Road SE for a future store.

Parts of Mount Vernon Road are bumpy and ripe for repaving 15 years after completion of the widening project, and some road improvements are already in the planning stages. Mr. Lindenlaub said projects are being planned at the 15th Street and 19th Street intersections to improve safety and reduce turning movements that cause traffic to back up.

Another plan is to create a “road diet” from 38th Street to East Post Road by narrowing the traveled portion to one lane in each direction and adding a center turn lane to make turning movements safer. The reduction to one lane each way is expected to slow down traffic and reduce accidents.

Linn County also wants to bring the busy stretch of Mount Vernon Road east of the city limits into alignment with modern standards as traffic on it grows, Assistant County Engineer Garret Redish said. With traffic well over 7,000 vehicles per day, “it’s one of our two or three busiest roads,” he noted.

The county is preparing in 2017 to add a center turn lane to the portion of Mount Vernon Road that it controls from the intersection with East Post Road to Vernon Valley Drive near Highway 13.

The project will add create a five-foot paved shoulder, flatten the slopes on ditches to reduce rollover dangers, replace or repair culverts and remove obstacles in the right-of-way.

One consequence of past widening projects has been the elimination of some old commercial buildings and the narrowing of grass buffers that separate sidewalks from the roadway. Although the action plan won’t come with any money attached, finding ways to make the roadway more pedestrian friendly could be one of the items that takes precedence.

“If you’ve ever walked Mount Vernon Road, it’s not a pleasant thing,” Mr. Lindenlaub said. “The distance between the sidewalk and the traveled portion is very narrow.” He said the city is looking at widening the sidewalks from 15th to 19th streets.

Reducing the possibility of a large big-box commercial development along Mount Vernon Road could be one zoning component of the corridor plan, however commercial Realtor Scott Olson, a veteran city council member, does not see the arrival of big-box retail as likely.

“There’s not much interest really,” he said. “They [big box retail chains] don’t even ask about that area.”

Although Mr. Cronin is looking forward to the road improvements, perhaps his most emphatic point during the public input process was to avoid lane closures on and traffic diversions away from Mount Vernon Road during any construction that emerges from the plan. He said the multi-year road widening project that began in about 2000 caused many motorists to avoid the road because of diversions and blocks.

“It took a very long time to get them back,” Mr. Cronin said.