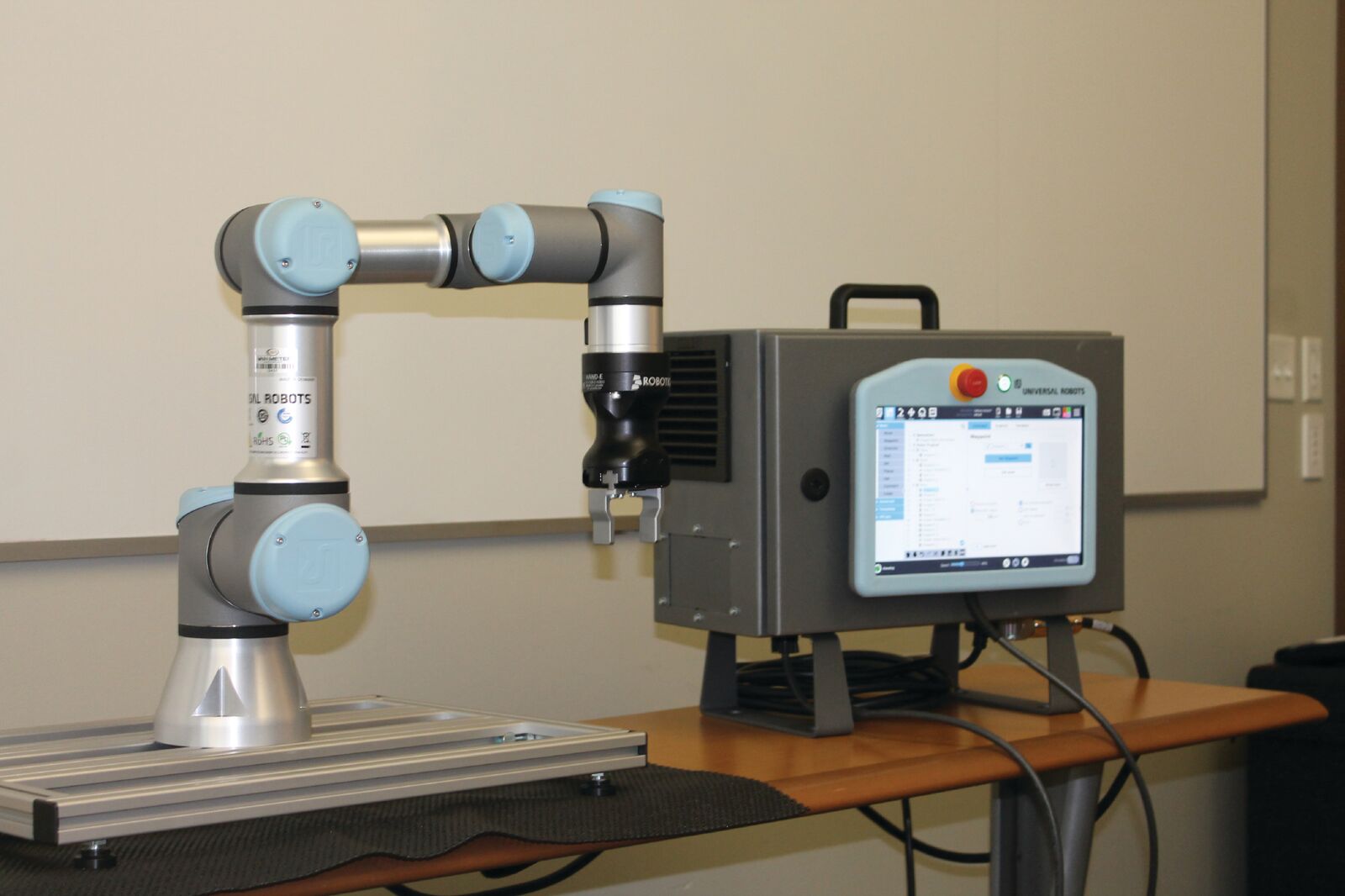 Relatively inexpensive and designed to work safely around humans, collaborative robots are being adopted quickly and may be coming to a factory near you. PHOTO KATHARINE CARLON

A new class of industrial robot is on the way – and yes, they will be taking human jobs.

That’s not all bad, say experts in collaborative robots, or “cobots,” the next generation of automated helpers designed to work side-by-side with humans and capitalize on the best attributes of both.

“A lot of companies are telling me, ‘We never would have imagined that we would be investing in robotics, but because of issues of workforce, we’re being forced to,’” said Chad Engelkes, automation product manager for Cedar Rapids-based Van Meter Inc., speaking during a breakout session at the CBJ’s 2019 Manufacturing Conference.

A widening skills gap, worker scarcity and rising employment costs are just some of the pressures facing American manufacturers, Mr. Engelkes said. The need to be fast and flexible in switching up production lines and timetables while keeping costs down is also driving the robotic revolution. That’s especially true when vying with global – and sometimes state-subsidized – competitors not working under the same labor and environmental constraints.

“Are robots replacing jobs? Absolutely they are, and they have to,” Mr. Engelkes said, pointing to a recent Deloitte study suggesting 2.4 million manufacturing jobs will go unfilled from 2018-2028. “But in the same breath, we have to realize robots are saving jobs, too. There’s a scarce resource out there [labor], and anytime there’s a scarce resource, we have to look for ways to make that more productive, get more out of it … and keep those jobs here.”

Enter the cobot. While industrial robots have been used in manufacturing for decades, this new technology is designed to work safely with and alongside people, instead of being isolated in a safety cage, like most robots deployed today.

Mr. Engelkes said cobots are best for unpleasant, repetitive or precision tasks, as well as those that can reduce human injury and improve plant safety. They are typically lightweight and easily programmable, allowing them to be moved from task to task as needed.

Best of all, said Stuart Shepherd, Stuart has a accountregional director of sales for Universal Robots USA, they offer a short return on investment.

“This is our Apostles’ Creed: We believe that anyone can afford to use an industrial robot … in their application today and get fast payback,” he said. “If you can dream it, think it and a person can do it, [a cobot] can probably do it with some exceptions.”

Though the average payback time for investing in cobot technology is 10-12 months, Mr. Shepherd pointed to Dynamic Manufacturing of Minneapolis, which recouped its outlay within two months of employing three cobots in machine tending, degating and kitting –  quadrupling production and freeing up staff for more complex tasks. In an even faster turnaround, Task Force Tips of Valparaiso, Indiana, recovered its investment within the first 34 days of purchasing 12 cobots to run Computer Numerical Control (CNC) machines 21 hours each day.

“Because he’d been working with us and had some practice, he was able to get machine-tooled robots and everything up and running in less than four weeks,” Mr. Shepherd said. “This is how fast it’s going, and frankly, in this country … we’re smart people but we’re much more conservative when it comes to going out and putting in equipment than other countries. Mexico, Korea, India – these guys are going crazy for it.”

Mr. Shepherd said that globally, as the volume of robots have increased, so have the number of jobs – and not just in manufacturing.

“Even in retail, not just in the warehouse, but out around customers, there are places this can be used,” he said. “Watch in certain department stores, and you may see some of this happening.” CBJ