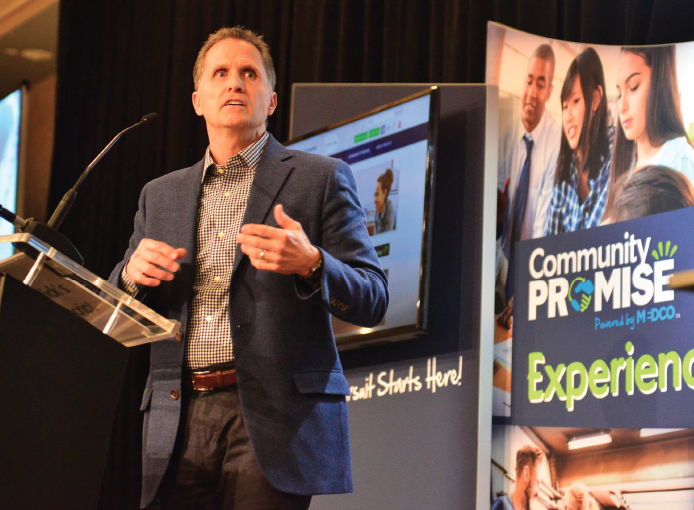 MEDCO board chairman and Marion Mixers CEO Lee Eilers called for an end to “generational snobbery” in his keynote address at the MEDCO luncheon. PHOTO IMPACT PHOTO/JOE PHOTO

Introduced at the previous year’s event, Community Promise was created to ex­pose students and teachers in Marion’s two school districts to specific career op­portunities available within the commu­nity. Some 130 businesses have since par­ticipated and 487 students have taken part in job shadow opportunities. These experiences are coordinated by Workplace Learning Connection, a local partner of Community Promise.

Career Explorer clubs have also been launched in the city’s schools, and some 60 careers available in Marion are now highlighted on a program website for stu­dents to consider.

The aim of the program is to address the workforce challenges of employers and help students identify clear career pathways in their hometown.

“In 2018, we will roll out both the Pursuit Promise and Pursuit Grant pro­grams,” MEDCO President Nick Glew told an audience at the Cedar Rapids Mar­riott that included dozens of high school and middle school students.

The Pursuit Promise is a document that will be signed by participating students and employers, formalizing their commit­ment to enter into a long-term mentoring relationship. While it doesn’t guarantee a student full-time employment, it indicates a high level of intent by the employer and long-term interest by the student in work­ing together.

After signing the Pursuit Promise and entering their senior year of high school, students may be eligible to apply for a Pursuit Grant to fund training needed to achieve their career goals.

The grants can be up to $4,000, and must have a two-to-one cash match pro­vided by a combination of the partnering business and the student. Students must contribute financially in some way to qualify, and it’s envisioned that the stu­dent or their family and the participating business will each pay a third, although other funding streams or grants could count toward that contribution.

They both received career direction and support from school counselors and the Kirkwood Community College’s Workplace Learning Connection to iden­tify the local educational resources they would need.

Ms. Cochran has since taken an inter­est in computer-aided design classes and enrolled in the Architecture, Construction and Engineering program at Kirkwood to help her prepare for a civil engineering ca­reer at Anderson-Bogert Engineers in Mar­ion. Mr. Hungate opted for a Kirkwood welding program to prepare for a manufac­turing career at Marion Process Solutions.

Bridging the generational divide to make Community Promise work may not be easy, and was the subject of the lun­cheon’s keynote address by Marion Pro­cess Solutions CEO Lee Eilers. The grow­ing company builds industrial mixers and related equipment, and is one of the city’s oldest and most successful manufacturers.

Mr. Eilers, who chairs MEDCO’s board of directors, discussed the common com­plaint of millennials among earlier gener­ations as spoiled and coddled.

“I’m going to kick indifference to the curb and say that the millennial genera­tion is the coolest generation that ever walked the planet,” Mr. Eilers said, de­scribing several ways in which he believes the group has been underestimated.

Mr. Eilers also called for an end to what British intellectuals C.S. Lewis and Owen Barfield called “generational snobbery,” or the tendency for each generation to dismiss the art or science of the previous generation as obsolete or inferior.

Advising students, Mr. Eilers said, “when you start that first job, your atti­tude is going to be that you’re being paid to do what you do … but if you’re blessed enough, you’ll get to believe you’re made to do what you do.”

Getting to that point, he acknowledged, can require years of learning in the job.

“You can’t microwave it – you have to pay for it,” he said. “Lean into it, but don’t miss that opportunity.”

“We can only play on that one string we have, and that is our attitude,” he said.

Innovator of the Year

Rapids Wholesale of Marion was also pre­sented with the MEDCO Innovator of the Year award, sponsored by the CBJ.

Rapids Wholesale is a leading Midwest supplier of beverage and food serving and dispensing equipment. The company uses cross-disciplinary innovation groups and promotes the best from each group to its Innovation Leadership Team. They have come up with solutions such as a cold-brewed coffee system and a cloud-based asset tracking system for the maintenance of food service equipment and vehicles.

“Each day we try to bring innovative solutions to the marketplace that some­times challenge our customers to break out of their status quo,” President Joe Schmitt said. He added that the innova­tive culture influences not only customers, but helps keep valued employees by pro­viding an atmosphere where their ideas are respected and appreciated.