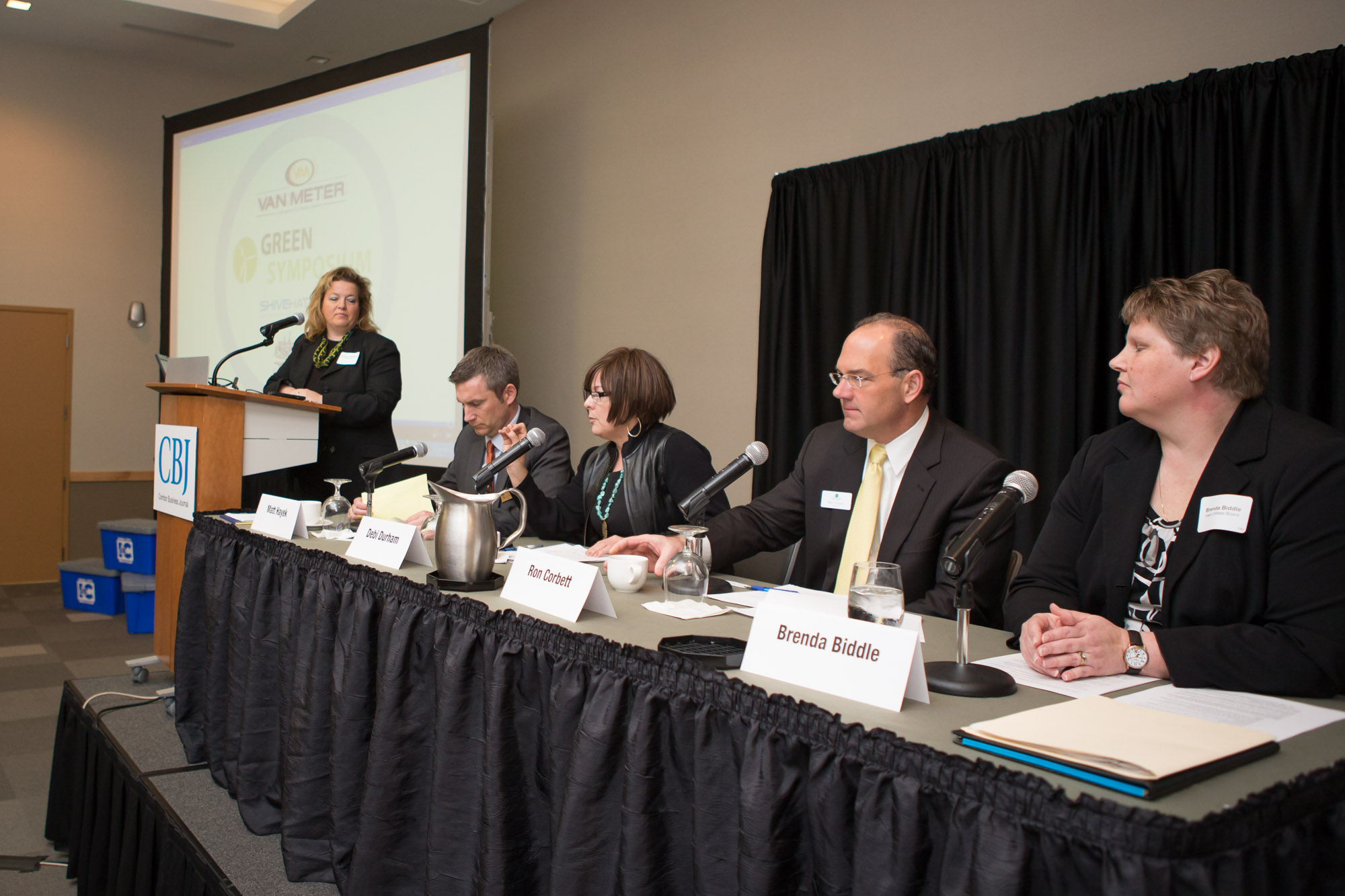 That’s what Cedar Rapids Mayor Ron Corbett and Iowa City Mayor Matt Hayek said during a panel discussion on sustainability, as part of the Corridor Business Journal’s annual Green Symposium. The breakfast event took place April 10 at the Kirkwood Center, 7725 Kirkwood Blvd. SW, Cedar Rapids, and included a panel discussion, keynote and awards for buildings that have been LEED (Leadership in Energy and Environmental Design) certified in the past year.

For more photos from the Green Symposium, visit our events page.

In Cedar Rapids, major sustainability projects include the under-construction downtown Cedar Rapids Public Library, which is aiming for the highest level of LEED certification, a platinum rating, and planning for infill projects in the city’s core. In Iowa City, projects have included completion of the East Side Recycling Center, a LEED platinum building, and installing LED (light-emitting diode) lighting, which is part of an energy plan which saves the city about $200,000 per year in utility costs, Mr. Hayek said.

“It’s so important for government to play a role in this, I think, because of the educational impact, and leading by example,” he said.

Mr. Corbett added that often the discussion about sustainability centers around cost and how long it would take to see a return on investment. To make green practices the norm would require a major change in mentality, he said.

“When we build a road, there’s really no return on investment for that road: we build it, it might cost a million dollars, we hope it lasts as long as it possibly can,” he said. “Not everything has to be looked at in that narrative of return on investment. Sometimes there are issues where it will just cost the public money if we want to bridge it.”

Both mayors noted that their cities will continue to face pressing decisions regarding sustainability.

In Iowa City, one issue discussed was aging school buildings. Mr. Hayek said it might seem easy and cost-effective to build a new school in an empty field, but options like that can have hidden social and environmental costs, such as decreased walkability.

“Some of the greenest practices come from focusing on core neighborhoods,” he said.

In Cedar Rapids, storm water management will continue to be an issue as the city tries to protect itself from the risk of floods. The downtown library was cited as a positive step: with a large green roof, the library will be able to absorb most rainwater that falls on it.

Dubuque was used as an example of a city that has successfully leveraged public policy around sustainability to attract private investment.

In 2009, IBM announced an expansion into Dubuque that would create more than 1,000  jobs. A public-private partnership then transformed a large former department store downtown into a LEED Platinum office space for the company to occupy.

Mr. Corbett said IBM is a company that “lives and breathes (sustainability) on a daily basis,” and chose to expand to a city which shared the green philosophy.

“You can see that the strong public policy has turned into good economic policy for Dubuque,” he said.

Debi Durham, Iowa Economic Development Authority’s director, identified herself as a “green Republican,” noting that more people are becoming interested in green practices because of potential cost savings. She said the state needs a holistic approach to sustainability.

Water conservation is an issue that keeps her up at night, she said. Along with workforce development, Ms. Durham said the drought is one of the top issues that could hamper Iowa’s growth.

“We need to be having the conversation in our communities, of how we’re dealing with the conservation of water,” she said.

Affiliated Distributors’ top message to clients is they need to become energy efficient before investing in renewable energies.

For example, if a homeowner wanted to install solar panels to light an average-sized house with regular light bulbs, the cost to set up the system would be more than $4,500. With LED bulbs, the cost would be about $1,520. So, the efficient practices (lightbulbs that use less energy) make the renewable practices (using solar energy) much more practical to implement.

“We’re trying to get people to understand efficiency first, renewable next, and why that makes sense,” he said. “I want to get rid of the word ‘green,’ Everything that we do that’s ‘green’ should be general practice.”