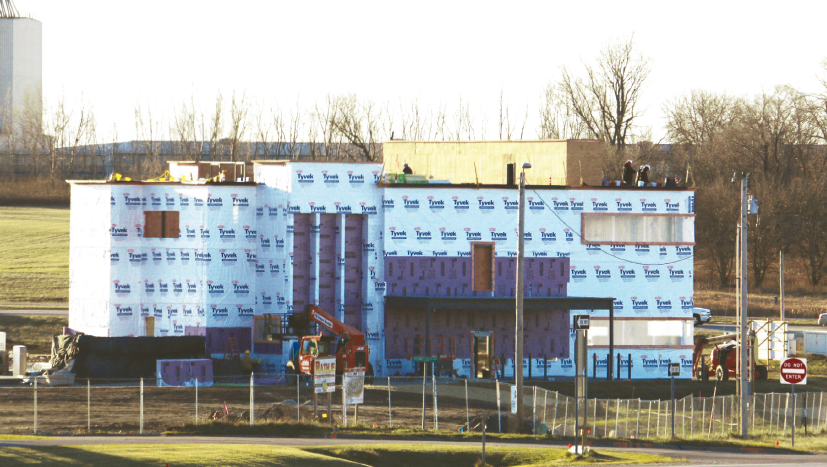 The driving range and mini-golf course that long greeted travelers entering Marion from the east is quickly transforming into a major mixed-use development that will extend the city’s retail scene east of Highway 13 for the first time.

The first business, Dupaco Community Credit Union, is rapidly taking shape at what has been named Squaw Creek Crossing, after the waterway and county park a few miles south. A large Kwik-Trip convenience store will soon follow, site plans submitted to the city show.

“Hopefully, you’re going to see a convenience store and a hotel coming out of the ground in the spring or summer of 2018,” said Jim Angstman of Coldwell Banker Hedges Realty, who is marketing the 20-acre gateway development at the busy intersection of highways 151 and 13.

The new 7,000-square-foot credit union branch will be something unique for the area. Dupaco calls it a “learning lab” branch, and it will have an interactive video teller service to connect customers to tellers located in Dubuque; it will also offer hands-on demonstrations of the company’s technology so customers can take advantage of the credit union’s mobile and desktop deposit services.

One of the future drivers of traffic at the development is happening a few miles north, as work begins on the huge Prospect Meadows baseball complex that will attract scouting events hosted by Perfect Game USA. A study conducted for GO Cedar Rapids, the metro’s convention and visitors bureau, estimated 60,000 out-of-town visitors will attend tournaments at Prospect Meadows each year, generating an additional $4.25 million in lodging expenditures and $8.25 million in food and beverage sales.

Those projections aren’t the only factors driving recent investments in Marion, which include the 88-room Townplace Suites by Marriott under development by Kinseth Hospitality on a redeveloped stretch of Seventh Avenue, Mayor Nick AbouAssaly said.

“I think the activity we’re seeing now in Marion is really being driven by a fast-growing population that is underserved in commercial and retail services, so developers are seeing an opportunity to make a profit by helping meet those needs,” Mr. AbouAssaly said.

Talks are advancing with two developers interested in building hotels in Squaw Creek Crossing, Mr. Angstman said. While feeling positive about its prospects for at least one hotel, he said the hotel developers are still working through the financing stage and aren’t ready to commit.

The planned development has space for offices, apartments and mixed retail. A couple of the more visible parcels on the outer perimeter of the development are tentatively designated for attractive restaurants, Mr. Angstman said. A sale is also pending on one 1.75-acre parcel at Hennessey Parkway and Highway 13, the largest in phase one of the development, according to the project’s website. That property is being offered at $18 per square foot, the same rate as the previous one-acre parcel acquired by Dupaco.

Phase two of the project calls for a three-acre, 72-unit multifamily development. Although a developer has not claimed the site, studies by the city of Marion have shown a deficiency in workforce housing, and the potential exists for state workforce housing tax credits.

Given the possibilities of the site, it’s easy to wonder why it wasn’t developed earlier. Mr. Angstman said the development became possible when the seller came down on price. An adjustment may have been crucial, he said, because of the high expenses of developing a new area with such features as highway deceleration and turn lanes, and new traffic signals at the entrances.

The area further north on Highway 13 is seeing strong signs of real estate activity, including the development of high-end townhomes, a new home for the First United Methodist Church of Marion and an expansion of the Linn County REC headquarters. Mr. AbouAssaly said there are also indications that some retail will soon be arriving at the southeast corner of the highway intersection where Squaw Creek Crossing is located.