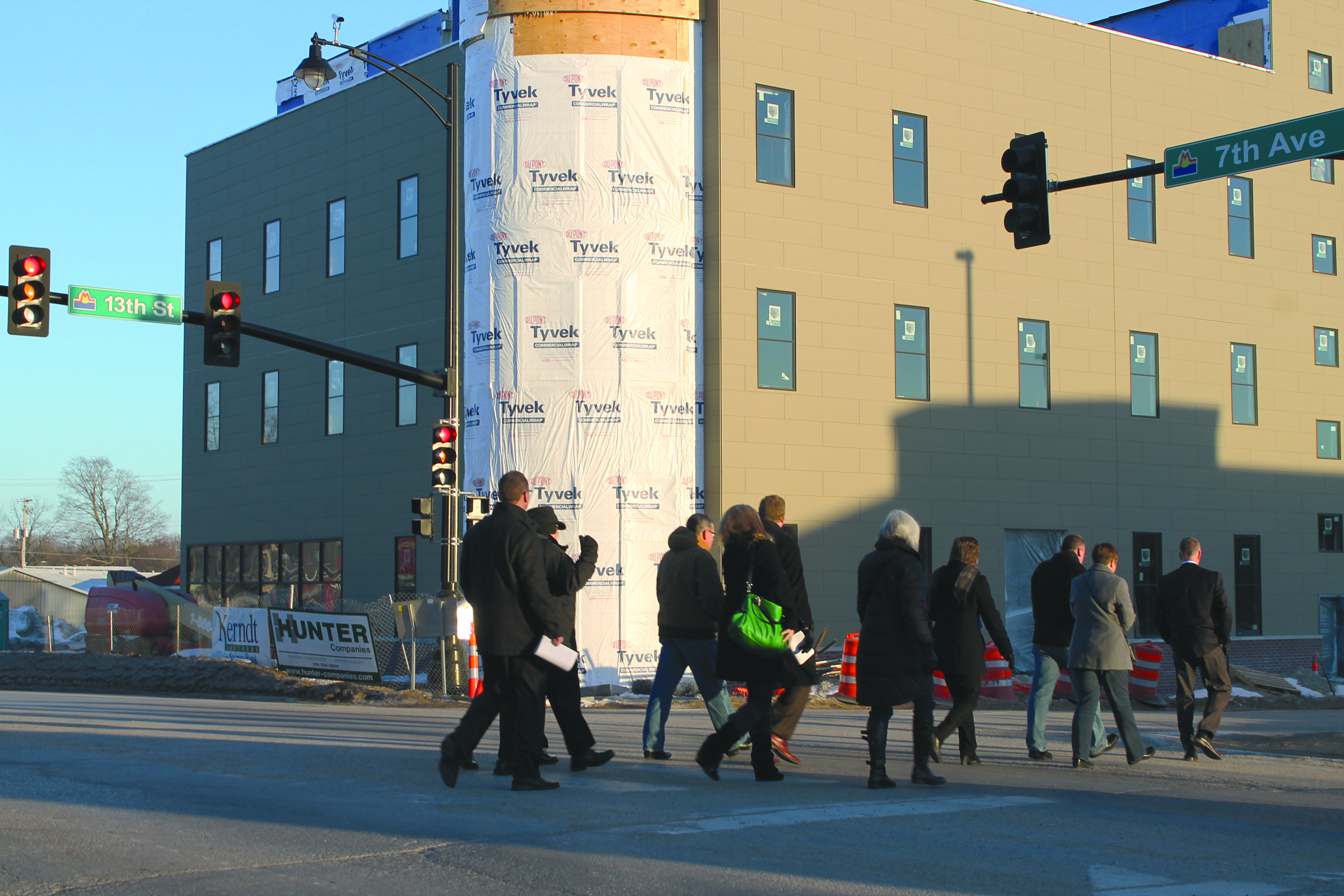 The long-awaited relocation this summer of Marion Iron Co. could trigger a domino chain of commercial development on the east side of Marion in addition to clearing the way for the city’s new Central Corridor.

Motorists traveling on Marion’s main east-west thoroughfare have long passed right through the middle of the scrap and structural iron business, which straddles Seventh Avenue on both sides of the 2600 block.

City planners working on a new Central Corridor along the former Rock Island Line easement identified Marion Iron as the location for a roundabout that would allow motorists to move between the old Seventh Avenue to the east and the new Sixth Avenue corridor to the west.

The owners of Marion Iron, brothers Jim and Marvin Brown, weren’t opposed to moving. They simply did not want to incur any debt because of the move to a new site.

“It’s a great opportunity to clean up and start over,” said Jim Brown, conceding that his brother is somewhat more cautious about the prospect of uprooting.

Figuring out how to make it work wasn’t exactly easy for the city or Marion Iron. The pieces finally fell into place when Genesis Equities of Marion saw a potentially rewarding redevelopment opportunity.

Genesis, affiliated with Abode Construction, offered to develop another salvage yard location operation for Marion Iron Co. on a 15.5-acre site next to Rogers Concrete in the Marion Industrial Center in exchange for the old Marion Iron site. The new site, which cost about $1.26 million, is more than twice as large as Marion Iron’s current 6.5-acre site.

A tax increment financing agreement with the city of Marion for the old Marion Iron site will help make the numbers work for Genesis Equities, according to Chad Brandel, director of business development for Abode Construction.  The company will also receive a payment from the city of Marion for the property it will use to construct the roundabout, a relatively small portion of the total.

“It’s been a two-year process working with Jim and Marvin Brown,” Mr. Brandel said. “Oila! Here we are relocating them.”

Work on the new facility is expected to begin in the spring and be completed in time for Marion Iron to reopen in its new location next fall, according to Mr. Brandel.

Mr. Brandel said the land that Genesis Equities is acquiring from the Browns could be redeveloped in concert with the vacant Prince Agri property that is for sale to the east.

“It’s pretty exciting to think what that site will look like in a few years,” Mr. Brandel said.

The relocation may elevate the redevelopment potential and value of a number of properties in the area because it will no longer bear the stigma of having a salvage yard for a neighbor.

“It’s the nature of us,” Jim Brown said. “Nobody wants to be in the backyard of a salvage yard.”

The acquisition and relocation of Marion Iron is “one of the biggest pieces along the central corridor,” according to Marion City Manager Lon Pluckhahn. He said construction of Sixth Avenue through the central corridor is expected to begin in 2015. It will be bounded by two roundabouts, one at the Marion Iron site and the other at the site of the current Whetstone Group building, 707 Seventh Ave.

The new location will be more suitable because it is separated from residential, retail and office uses. In addition, Mr. Brandel said the slope of the property will make the metal stored in the yard for recycling much less visible to passers-by.

The design of the new salvage yard will be a vast improvement, according to the Browns. Unloading and loading areas will be designed for easy pull-through access, and the yard will be laid out for efficiency. Marvin Brown is leading the relocation effort for the business.

After the new location is open and begins buying metal, the old facility will be closed. Over a period of several months, most of the metal on the old site – thousands of tons of it – will be shipped off to buyers so that the amount moved to the new site will be minimal.

Marion Iron employs up to 26 people at any given time, with warm weather months busier than cold weather months. It is one of the oldest continuously operated businesses in Marion, with a history dating back through several owners to approximately 1907, when it was located on Fourth Avenue at the foot of a local landmark known as Irish Hill. It later was moved to a location at the southeast corner of 13th Street and Seventh Avenue before moving to its present site.

Despite the low esteem in which many people hold scrap yards, they might be the commercially successful form of recycling. More than 90 percent of the iron and steel discarded in the U.S. is recycled, and it is more profitable than most other forms of recycling because it is so much less expensive to recycle the metals than to refine them from ore.

“It’s the oldest recycling industry in the country,” said Jim Brown, who enjoys the “people side” of the recycling business.

The redevelopment process continues a working relationship between the Brown brothers and the owners of Genesis Equities that goes back to 2011, when they announced plans to work together on redevelopment of the Marion Shopping Center into a mixed office and retail development called Lincolnview Square. The $22.5 million makeover has since brought several new businesses to the site.