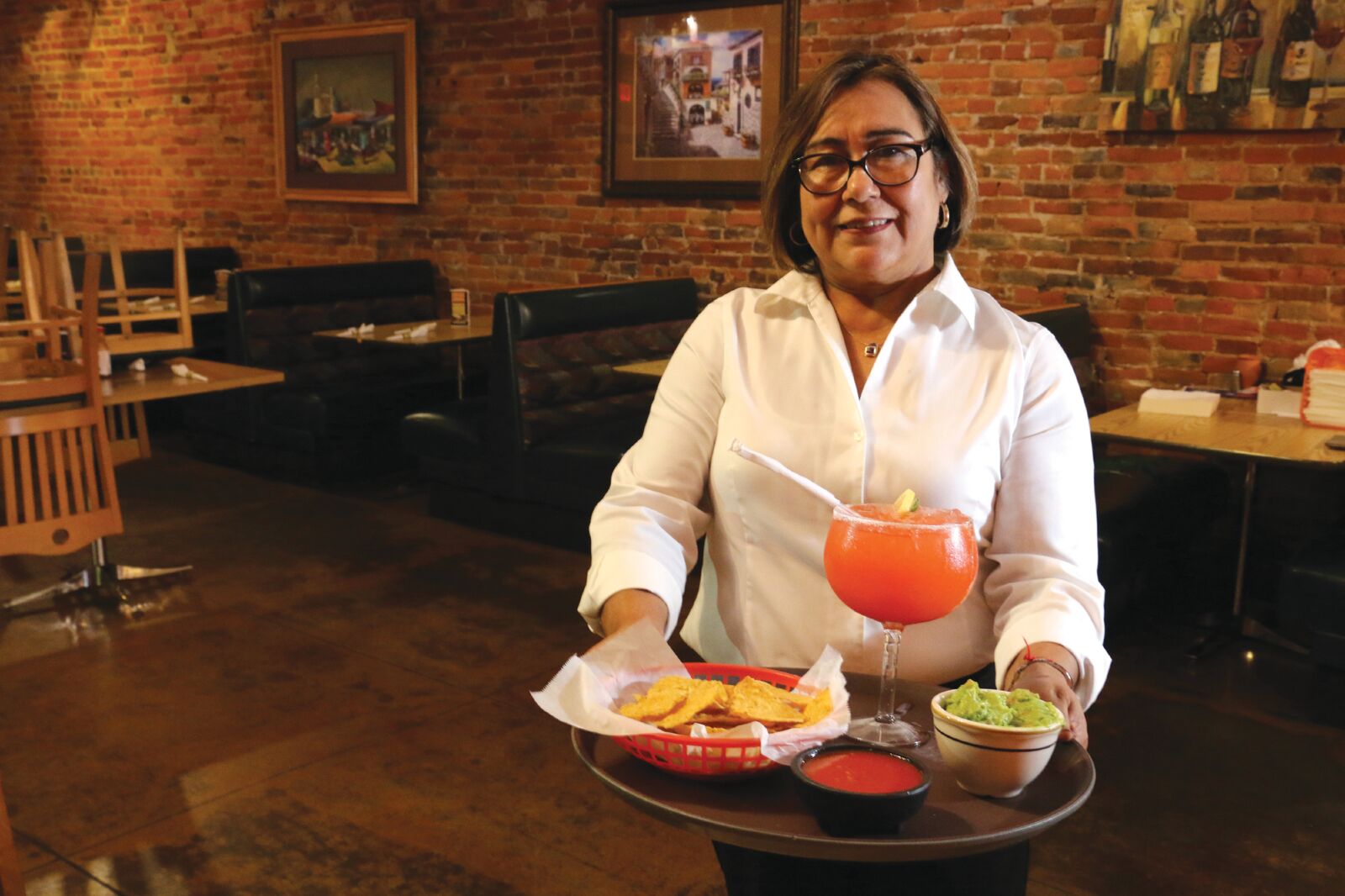 Most Latino business owners in the Corridor say it’s business as usual despite the raging immigration debate – but some say that’s the fear talking. Above, Carmen Legaspi, owner of La Reyna, shown in her Vinton restaurant. PHOTO ANGELA HOLMES

Harsh rhetoric on deportation from the Trump administration and a rise in hate crimes – notably an Aug. 3 mass shooting at an El Paso, Texas shopping mall driven by a hatred of Hispanic immigrants – have left the Corridor’s Latino population saddened and on edge.

But aside from the difficulty in hiring Spanish-speaking help – a situation some speculated could be the result of Mexican and Central American natives heading back home – most area Latino business owners claim they feel supported by Eastern Iowa communities and are largely insulated from the national furor over immigration.

“I don’t have any complaints – we’re not frightened, and we have the same people coming in,” said Antonio Pacheco, owner of El Paso Tacqueria and Latin Market in Iowa City. “But employees – it’s really hard, it’s a really big problem. Maybe there are a lot of people moving from the state? Probably, but I have no idea.”

Down Highway 1, at Los Arcos Mexican restaurant, manager Graham Lynch, speaking on behalf of owner Rigoberto Garcia, said it, too, was experiencing business as usual. The restaurant is also struggling to fill positions, but that is a perennial issue not necessarily related to a shrinking Latino labor pool.

“It’s too hard to tell, because the struggle to find employees is always there,” Mr. Lynch said. “As far as morale [in the community], in the last month or so, there is a feeling of general unrest, but that’s everywhere, not just here in Iowa. The fact is, there is not 100 percent protection anywhere in the U.S., but we’re not fearful and we have no reason to be fearful. We love our customers and our customers love us, and that’s not going to change.”

The CBJ reached out to nearly two dozen Latino-owned businesses in the area to assess the impact heated immigration rhetoric is having on their businesses, customers and employees. Many did not return phone calls or simply hung up. Of those who answered, most said they were feeling few effects other than an acute employee shortage.

“People are scared to speak,” said Monica Vallejo, president of League of United Latin American Citizens Council 376 of Cedar Rapids, the oldest surviving Latino civil rights organization in the U.S., adding that she is hearing of “problems everywhere” from restaurants unable to staff their kitchens to roofing and construction companies struggling to hire crews.

“Everybody is having problems with workers,” Ms. Vallejo said. “People are going home or they’re afraid to work. And [businesses] are afraid to hire people without legal documents.”

Ms. Vallejo said she knew of at least one local Mexican restaurant that had to close due to lack of workers, and another that wanted to expand to a new location but could not find Spanish-speaking employees to staff the kitchen. That restaurant attempted to recruit workers from Mexico but found the legal costs to bring them into the country too prohibitive.

“Latino businesses are facing a lot of obstacles,” she said. “But it’s a hard time to talk about them.”

Large newspapers like the Philadelphia Inquirer have lamented “empty parks, pews and Mexican restaurants” in major cities following President Donald Trump’s recent pronouncement that Immigration and Customs Enforcement (ICE) would conduct massive raids in 10 metros to round up undocumented immigrants. Even before that, a December 2018 Urban Institute study found that one in six immigrant families had begun to avoid certain activities to minimize unplanned encounters with federal authorities, including parent-teacher conferences, health check-ups and congregating at venues catering to Latino populations.

That does not surprise Carmen Legaspi, who owns and operates La Reyna restaurants in Vinton and at NewBo City Market in Cedar Rapids with her husband Carlos. The issue touches her business very little in majority white Vinton, where none of her employees are of Latino origin, or at NewBo, where she has hired and trained a Filipino chef to prepare the restaurant’s trademark Mexican specialties.

But those running restaurants and other businesses catering to the Latino market in big cities have not been as lucky, struggling mightily to find Spanish-speaking workers and dealing with a declining numbers of customers – either, she said, because they are going back to their home countries or staying in the shadows, away from conspicuous areas.

“In other parts of the country, like Chicago, my friends and relatives are telling me there was a big impact,” Ms. Vallejo said. “In these places, people depend on Spanish [speaking] workers. It’s a critical situation – these people aren’t applying for jobs and these are hard workers who work all hours of the day. It’s very sad, and actually a lot of people are going back to their countries.”

Latinos constituted about 6 percent of Iowa’s population as of 2017, according to the Iowa Office of Latino Affairs – more than a 130 percent increase, or an additional 107,345 people, since 2000. A 2018 report from the office counted almost 4,700 Hispanic-owned businesses statewide, representing a more than 446 percent increase over a decade’s time.

Both Johnson and Linn counties fall below the state average, with Latino populations of 5.7 and 3.3 percent, respectively. In nearby Louisa County, home to Columbus Junction and its thriving Latino community, nearly 16 percent of the population is of Hispanic origin. Next door, in Muscatine County, the number jumps to 18 percent – mostly thanks to the presence of West Liberty, said to be the state’s first minority-majority community. Latinos comprised 49.8 percent of West Liberty’s population in 2016, according to the U.S. Census Bureau.

Jesus Ocampo, who runs El n’ Js Coffee House, one of many Latino-owned businesses in downtown West Liberty, said the community is concerned, but hardly panicking. Mr. Ocampo, whose parents are both from Mexico, was born and raised in Muscatine and runs the coffee shop with his sister Elena.

“People are still coming in for breakfast, lunch and dinner and everywhere else they go – to church and out and about,” said Mr. Ocampo, who attributed the relative feeling of ease to West Liberty’s longtime outstretched hand to the Latino community. “We’re a smaller community, very interknit. Everyone rallies around and there are no fears about anything because when something happens, you’ve got the whole town behind you.”

“West Liberty has been ‘that community’ for so many years and our residents have always been supportive of our many multicultural businesses,” agreed J.J. Garcia, vice president of West Liberty State Bank, a second-generation Mexican-American and president of the West Liberty Chamber of Commerce. “I haven’t really noticed that changing and I don’t think it will.”

Though he was aware of no businesses suffering as a result of the current political climate, Mr. Garcia said it hasn’t been all smooth sailing for West Liberty residents. Those in the country under the Deferred Action for Childhood Arrivals (DACA) program are under increased stress, he said, and some asylum-seekers are having trouble getting their visas renewed.

“If you’re talking about businesses, one business that’s really picked up is immigration law,” he said.

Trey Sucher, an immigration attorney with offices in West Liberty, Des Moines, Perry, Marshalltown and Denison, confirmed that inquiries to his offices have spiked, although actual removal proceedings have not increased under the Trump administration.

The Wall Street Journal recently reported that despite sometimes bombastic rhetoric, 256,000 immigrants were deported in 2018 under the Trump administration, versus a record 409,849 in 2012 under former President Barack Obama.

“Don’t get me wrong, we’re extremely busy, but the things that have changed aren’t the numbers – it’s that things take longer under the new administration and there are more adverse decisions that take more work,” Mr. Sucher said. “I would absolutely say, though, that we are receiving more inquiries from people fearful of being removed – more questions based on procedures or based on rumors people have heard. I spend a lot of time allaying peoples’ fears and trying to talk them off a cliff.”

Jodi Edwards, deputy city clerk for Columbus Junction, said that while ramped-up fears touch her community “and have an impact on the whole United States, I don’t think we’re feeling anything different in our town that is affecting our businesses. Maybe I’m naïve.”

Ms. Legaspi said she believes business owners in the Corridor and neighboring West Liberty and Columbus Junction might be struggling more than they let on.

“If I was in Iowa City or North Liberty, I know there would be a big impact for me – no labor, no people,” she said, adding she knows for a fact “there are people now who are scared to come in and apply.”

“When I was in Columbus Junction 10 years ago when I started, my employees were Spanish employees, and I would be very upset right now because I depended on that community,” she added, suggesting that some business owners might be wary about standing out. “Maybe they’re afraid to tell you; they don’t want to be involved in anything.”

Ms. Vallejo agreed that many in the community are wary of standing out, even business owners and those with legal status, as ICE tends to detain people first and ask questions later.

“When immigration comes, they don’t care if you have papers, they send you to jail,” and sort it out later, she said.   CBJ