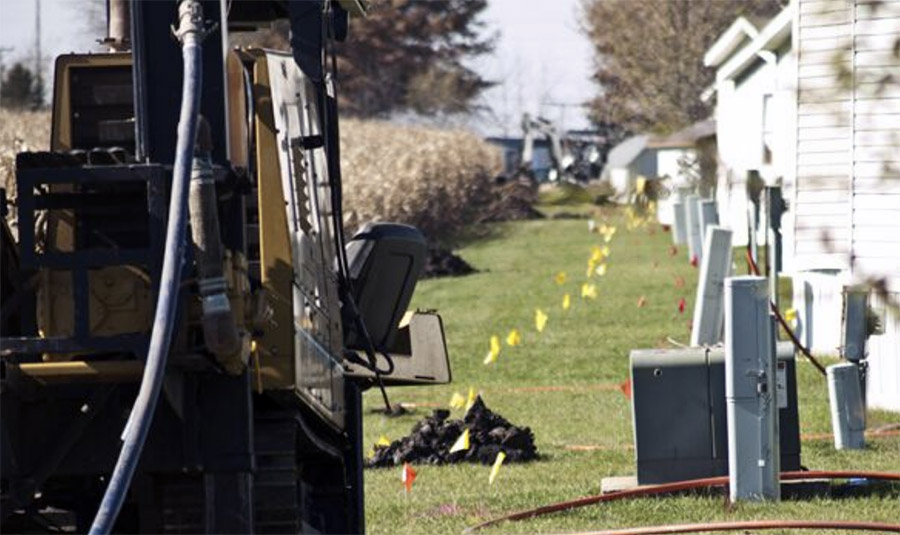 Flags mark the location of a new fiber line in Washington, where Kalona Cooperative Technology is investing millions to upgrade the city’s connections. PHOTO KCTC

The company has spent $2.5 million over the last three years to bring fiber optic technology to a large chunk of the Washington business and residential community, and plans to invest another $1 million in 2018, Ms. Peck said.

Included in that spending is a warehouse, the first building in Washington’s new industrial park south of the city, and a small structure – Ms. Peck calls it a “hut” – just north of downtown, where all connec­tions to the fiber trunkline from Kalona are made. A separate strand of fiber runs to each customer from that location, she said.

The company’s penetration of the Washington market is more than 40 percent, Ms. Peck said. That amounts to just a third of KCTC’s customer base in the much smaller market of Kalona, so there’s still plenty of room for growth.

KCTC, which opened for business in 1905 as Kalona Switchboard Co., began bringing fiber-en­abled phone, internet and cable TV service to the county seat after completing the conversion of cop­per lines to glass in its home service area in 2013. Ms. Peck’s now-retired predecessor, Ray Marner, and the co-op’s six-member board of directors have always worked to stay ahead of the technolo­gy curve, she said.

“The board knew all along fiber was the only way to go to be a player in the industry,” she added.

Fiber is an important economic development tool for bringing and retaining industry, as well as tele­commuters, Marketing Director Rory White said. He cited an Iowa City game developer who couldn’t get the internet speed he needed due to data caps by oth­er providers, so he moved to Kalona, where he con­tinues to develop games from his apartment in town. 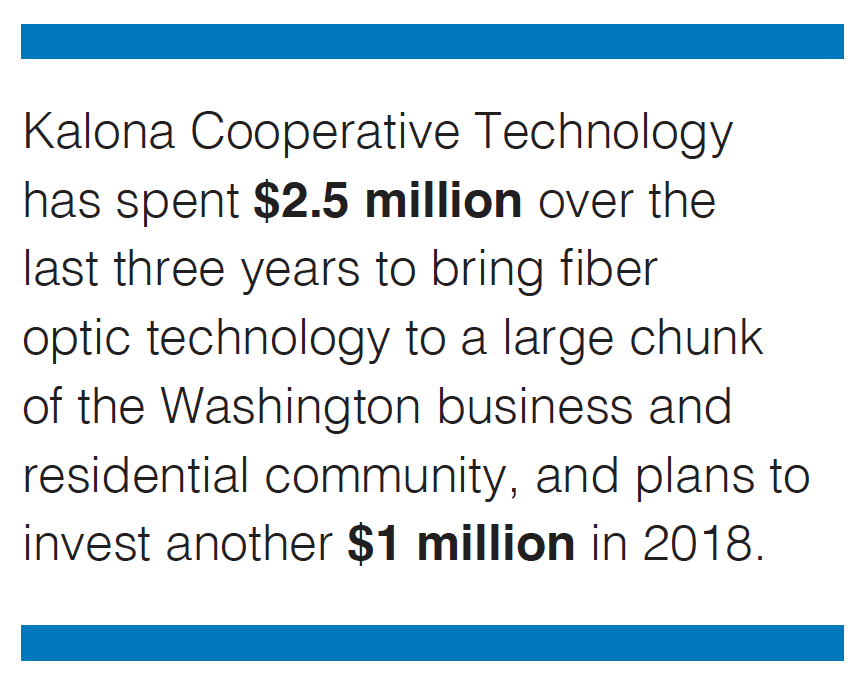 The absence of data caps and the security of fi­ber are differentiators for KCTC, he said. The com­pany’s fiber is run through heavy PVC conduit, making it difficult to cut and the bandwidth available compared to copper lines is huge.

“We have no issues if you want [1] gig service. We haven’t even scratched the surface of what’s possible through fiber, he said”

KCTC’s trunkline down Highway 1 from Kalona will tie in next year with a line coming north from Farmtel Communications (formerly Farmers & Merchants Mutual Telephone) in Wayland, creating a redundant system that will still function in case the signal from either direction is interrupted. The system in Kalona has triple redundancy, as it’s encircled by trunklines coming from Liberty Communications in West Liberty.

KCTC employs 25 full- and part-timers, working out of its office in downtown Kalona and iTech locations in Kalona and Washington. iTech provides repair service for cell phones and other devices; retail sales of tablets, laptops, desktop computers and accessories; and IT support services. Washington residents can apply for broadband service online or at the iTech office on the north side of the downtown square.

KCTC also owns 45 percent of Cloudburst 9, a company started by two Keota area farmers to bring internet service to rural areas. The other 55 percent is now owned by Liberty Communications.

Ms. Peck and Mr. White say KCTC’s local presence gives it an edge in competition with larger national providers such as Mediacom and Windstream. Among its local initiatives: KCTC holds an open house for members each year, often increases bandwidth without raising rates and offers an “A Paper” program in Washington and Kalona schools. Each week, students in designated elementary classes who earn As on assignments can register for a drawing for chamber bucks, with a grand prize drawing at semester-end.

The hometown touch extends to helping the Kalona area’s technology-resistant Amish access the benefits of fiber without compromising their beliefs. Because many Amish want access to an emergency phone without bringing one into their non-electrified homes, you can find “solar panels on what looks like an outhouse in the ditch” in many locations in the countryside, Mr. White said. The buried fiber, unlike copper phone lines, doesn’t carry its own current, hence the need for solar panels to power the phones.

“Our Amish customers have some of the most sophisticated tech solutions around,” Mr. White said with a laugh.

At the other end of the spectrum, KCTC’s fiber service also meets the needs of bandwidth-hungry younger residents, Mr. White said. He told of a local high school student who has already started a business developing Roku apps. The student had planned to move to California, but thanks to the KCTC’s fiber service, he plans to stay in Kalona and create apps from the “comfort of his home,” Mr. White said.

“That’s a pretty phenomenal thing,” he added. “We have the tools we need to keep younger folks in Iowa.”