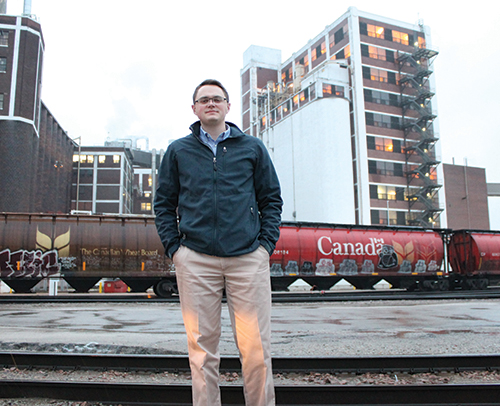 In the three months since he stepped into the new role, that mission has taken him to 26 of the 30 grain milling and bioscience companies in Cedar Rapids, where he tries to identify potential areas of collaboration with ISU that could add value to their businesses.

“What we’d like to do is understand the plants here, the processes and what could be done,” said Mr. Freeman, an ISU food technology graduate with experience at GPC in Muscatine and DuPont Industrial Biosciences in Cedar Rapids.

Some of the areas are not so obvious, such as identifying new opportunities for reducing manufacturers’ waste streams by converting them into useful byproducts and helping companies reduce their wastewater loads.

The list of Cedar Rapids food and biosciences manufacturers reads like a “Who’s Who” of the American food and bioscience industries. It includes such giants as PepsiCo’s Quaker Foods, General Mills, Kraft’s Quality Chef Foods, Red Star Yeast, Cargill and DuPont.

A surprising number of the factories obtain feedstocks from one another. Much of the corn milled in Cedar Rapids is broken down into constituent parts through a process known as fractionation. Byproducts of ADM, for instance, feed nearby companies that produce yeast.

The size and strength of these companies presents opportunities, but also requires a different level of relationship building.

“The challenge with Cedar Rapids is that a lot of the companies are headquartered elsewhere, and have research facilities elsewhere,” Mr. Freeman said. As a result, decision-making on projects involving ISU is often shared with or made primarily at other corporate locations. With frequent industry mergers, the decision makers can change quickly.

As Mr. Freeman talks with corporate manufacturing divisions, he will also be discussing the needs of Cedar Rapids manufacturers with ISU researchers and staff members who can assist.

The ultimate goal is to build long-term relationships between ISU and the manufacturers that will bring more success to the companies, and wring more economic benefit from their Cedar Rapids plants.

The initiative to create the liaison position between ISU and the city of Cedar Rapids was announced back in March, with ISU agreeing to fund 75 percent and Cedar Rapids 25 percent of the $114,000 initiative, a part of which includes Mr. Freeman’s compensation.

Discussions of a larger ISU role in Cedar Rapids had been going on for more than two decades, according to Jasmine Almoayed, the city’s economic development manager. Many of those conversations were driven by high-level executives such as Martin Andreas, retired senior vice president of ADM, and former Penford Products President Tom Reed.

“It’s an obvious fit,” Ms. Almoayed said. The economic opportunities for the city in biosciences and food processing have been underscored in studies used to guide the area’s economic policies, she noted, including a 2014 study by AngelouEconomics.

Since Ms. Almoayed joined the city in January 2013, City Councilmember Justin Shields has kept the topic on the front burner of the city’s economic development agenda.

“I was looking at Cedar Rapids as the agricultural capital of the world, with all of the food processing that goes on, and the grain that comes in here,” said Mr. Shields, who retired from a food processing career at PepsiCo’s Quaker Oats plant, believed to be the world’s largest cereal mill. Mr. Shields said he realized that the average citizen had no idea how much impact agriculture has on the economy, and feels the city needs to support, develop and enlarge that economic base.

A group of manufacturing and business leaders from Cedar Rapids were invited to take part in a motor coach tour to meet with ISU and tour its research facilities about two years ago to gain a better understanding of their capabilities. Wendy Wintersteen, ISU’s dean of agriculture, later proposed the conceptual framework for the new position, and some meetings were held to discuss how it would work.

The city provided Mr. Freeman with offices in City Hall, where he works closely with Ms. Almoayed and other members of the city staff.

The attributes Mr. Freeman brings to economic development efforts include an insider’s knowledge of biosciences that allows him to “speak their language,” Ms. Almoayed said, and a familiarity with Cedar Rapids from growing up here.

“He ended up working out perfectly, plus he does have a customer service side to his personality that really helps,” she said.

While the most obvious benefit of the position is expected to be increasing the viability and competitiveness of the city’s manufacturing base, Mr. Freeman sees other areas of opportunity.

Another area of interest is in raising the overall profile of careers in grain milling, food processing and biosciences.

The number of manufacturing jobs overall has been trending downward as manufacturing has grown more automated, Mr. Freeman said, and yet the food processing and bioscience industries are still some of the region’s best sources for jobs with good wages and benefits. Through outreach, ISU could help educate the public about what jobs are available and what they are like, ranging from production to research positions.

A 2009 study by the University of Iowa helped bring into focus the scale and importance of the grain milling industry in Cedar Rapids. It determined that Cedar Rapids is the largest corn milling center in the United States, processing 1.3 million bushels of corn per day and generating a vast amount of waste products that could be used by other industries.

Despite its size, the industry tends to operate quietly in the background. Mr. Freeman would like to see it more widely understood, so that when people are confronted by its impacts, they also understand its economic contribution.

“A lot of people are oblivious to what goes on here [in grain milling],” Mr. Freeman said. He recalled a conversation with a Quaker Oats representative, who had heard public complaints about downtown traffic interruptions caused by railroad cars delivering the grain Quaker makes into products like oatmeal and syrup.

“We were here first,” was the Quaker perspective. With the plant’s roots going back well over 140 years, Mr. Freeman found it convincing.

ISU President Steven Leath and Iowa Secretary of Agriculture Bill Northey have taken a keen interest in the unusual program model, which has been dubbed a public-public-private partnership, Ms. Almoayed said. If the concept proves successful, she said there’s already discussion of ISU employing a similar strategy to collaborate with industries in other communities.

Discussions have also begun about the possibility of updating or expanding the UI’s 2009 study of the grain milling economy.

“It didn’t tell the complete story by any means,” Mr. Shields said. “We’ve been trying to define it much more completely.”