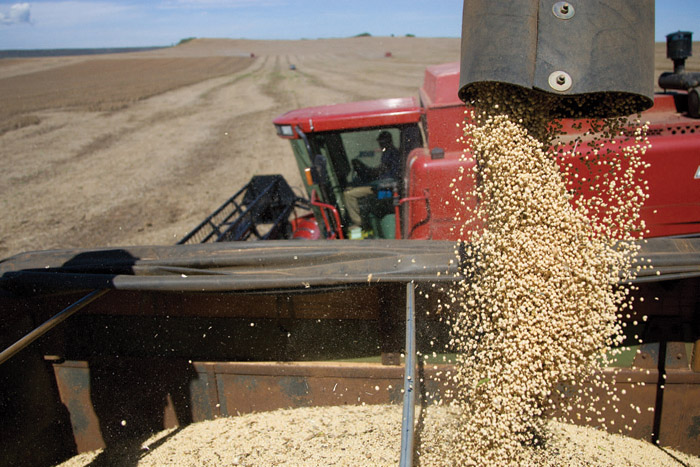 “In agriculture, we need international trade,” he added. “Odds of a trade war are very small with Japan. With China and Mexico, the odds get much larger. The rhetoric has been incredibly strong on both sides. My own sense is cooler heads will prevail, but that hasn’t happened yet.”

In a March 9 talk at Hills Bank and Trust’s annual Farm Outlook Conference in Riverside and a phone interview with the CBJ, Mr. Hart emphasized the crucial role of exports within the state and nation’s economies.

The agricultural bounty is far more than American people consume, with up to half of the surplus sold in other markets. Mr. Hart cited examples of U.S. export strength:

Export worries
The top six export markets all have trade agreements with the United States. President Trump has already scrapped the Trans Pacific Partnership, promised to renegotiate the North American Free Trade Agreement (NAFTA) and other trade deals, and proposed a tariff on imports. The tough talk raises fears of retaliation and driving export customers elsewhere.

“Our customers have other places they can get the goods. It’s just going to cost them a little more,” Mr. Hart said. “If you’re not buying corn from the U.S., go to Brazil, Argentina and Ukraine.”

He put the odds of a trade war at less than 50-50, but it’s “probably high enough that we need to be concerned.”

Mr. Hart takes some comfort in Secretary of Agriculture designee Sonny Perdue’s knowledge of international trade from his years as governor of Georgia, a cotton-exporting state, and Gov. Terry Branstad’s new role as ambassador to China. Mr. Trump has appointed people “who will aggressively talk up ag trade,” he said.

Mr. Perdue’s downside for Iowa, in Mr. Hart’s view, is that he is a Southerner. Domestic ag disputes tend to break along regional and crop lines, not party lines, he noted. Mr. Hart also laments that agriculture appears to be “well down the line” in the Trump administration’s priorities. Mr. Perdue’s nomination is the last in the cabinet to come up for Senate confirmation and the USDA budget will likely take a big hit.

There is also concern among farmers that Mr. Trump’s push to boost the fossil-fuel industry will hurt the biofuel market. Mr. Hart sees “lots of rumor and innuendo, but no changes so far in policy.” The industry “continues to chug right along as normal,” with record production month after month.

Farmers in general tend to look at Mr. Trump’s moves to cut regulations as “a net positive.” Despite biofuels worries, many support rolling back EPA regulations such as the Waters of the U.S. rule, restrictions on confined animal feeding operations, herbicide and pesticide restrictions, and regulations that raise the cost of developing new ag chemicals.