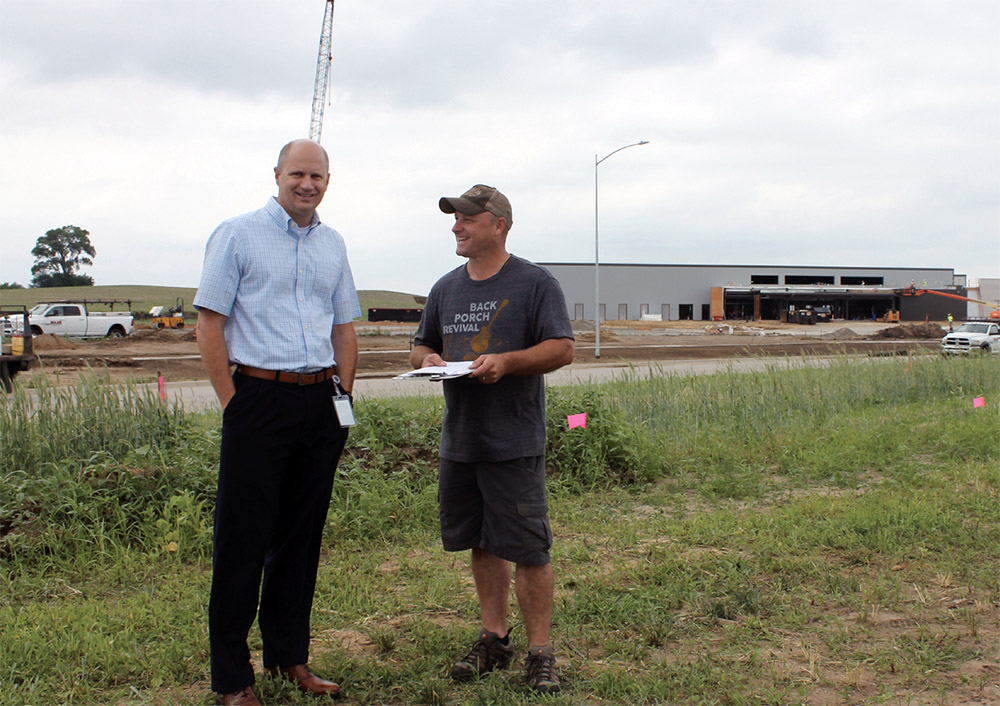 Scott Andersen, president of the Ders Group, talks to Tiffin City Administrator Doug Boldt at the site of Park Place, a major planned unit development by Ders Group that will bring big box retail, mixed-use construction and single-family homes to the town. Veritas Church’s new location is under construction in the background. PHOTO DAVE DEWITTE

The pace of commercial development has lagged residential development in Tiffin, the Johnson County community east of Coralville that was Iowa’s fastest growing city in 2017, but that will change this summer.

Work is progressing on the new Forevergreen Road interchange on Interstate 380 that will create a new gateway to Tiffin, and on the replacement of the I-80/380 interchange which will give the city more visibility and more lanes for easy interstate access.

Tiffin leaders are expecting the city’s first big-box retail store when the Forevergreen Road interchange is complete this fall. A national retailer has signed a letter of intent – the first major step toward committing to build – for a 185,000-square-foot megastore in the 270-acre Park Place development by Ders Group underway near the interchange. The retailer wants to open the store as soon as the Forevergreen interchange is completed, according Scott Andersen, president of Coralville-based Ders.

Assuming the deal proceeds, the store could open next spring on a site at the southwest corner of the interchange. Several other big-box retailers are likely to follow when the first retailer opens, Mr. Andersen said, although none have yet committed.

About 2 million cubic yards of earth are being excavated to create detention basins, streets and level lots in Park Place. Big-box retail will be on one side of Park Road, which will connect Highway 6 to Forevergreen Road. On the other side will be Park Place City Center, with ground floor commercial and several floors of residential, much like those developed recently on Fifth Street in Coralville. An abundance of single-family residential will round out the development.

Some of the work will improve the already high visibility of the site from I-380.

“In Iowa, it’s hard to find a piece of land that gives character to a development,” Mr. Andersen said. “But this site provides views all the way to Kinnick Stadium and the University of Iowa Children’s Hospital, and down into Tiffin.”

Retailers like the visibility and homebuilders like the views. It’s one of the main reasons Mr. Andersen and his team spent about six years assembling the Park Place site.

Veritas Church of Iowa City will be the first occupant of Park Place. Its large contemporary church, being built by Story Construction, is already enclosed, and will provide a needed meeting place for the growing congregation’s 900-plus members.

“Scott calls it ‘IRL on steroids,’” Tiffin Mayor Steve Berner said, referring to the Iowa River Landing mixed-use development the city of Coralville has been working on for more than a decade.

Meanwhile, at the 80/380 Commerce Park just northeast of the I-80/380 interchange, High Development is beginning work on the Hunt Club, a 23-acre master-planned 240-unit luxury multifamily apartment complex with a clubhouse, pool, playground and walking paths. Construction began this month on the six-unit first phase, CEO Darryl High said, with the first units expected to be ready for occupancy later this year.

Tiffin recently granted zoning approval for the town’s first senior living development, which will also be in the 80/380 Commerce Park. About three acres will be sold by High Development to a developer for the 70-unit senior living facility, Mr. High said.

Several names are missing from the upcoming projects. Mr. Andersen said he signed a confidentiality agreement that prevents him from naming the big-box retailer planning the megastore, and Mr. High said the developer of the senior living facility isn’t yet ready to unveil its plans.

City Administrator Doug Boldt said he is frequently asked about rumors that Home Depot, Ikea or Target are planning stores in Tiffin, but insisted that he personally does not know which retailer it will be.

“Would it surprise me if a Target or a Home Depot came here? Really not,” Mr. Boldt said.

A 185,000-square-footprint store would actually be large for a Super Target or Home Depot, however, making a superstore like Cabela’s – another chain rumored to be interested in Tiffin – more likely.

Tiffin’s biggest retail commitment as of late that can be named is the grocery chain Fareway. After much courting from Mr. Boldt, Fareway committed to locate in a four-lot development east of Solon State Bank which is under development by Matthew Adam-led Kaiser Holdings of Coralville.

Tiffin’s population grew 72 percent between 2010-2017, from 1,964 residents to 3,361, according to new data from the U.S. Census Bureau released last month. That made it Iowa’s fastest growing city, surpassing Waukee in central Iowa.

That was because the city was already well past 3,000 people, Mr. Boldt said, and the population now is probably closer to 3,800.

“Obviously you’re not going to get a lot of commercial activity until you get to 3,000 people, and we’re there,” Mr. Berner said. “That’s why Tiffin has been a commercial sleeper until now.”

One of the early believers in Tiffin was Mr. High, whose company developed the 80/380 Commercial Park. He started out more than a dozen years ago planning to build an outlet mall, but those plans were set back by the collapse of Iowa’s largest residential developer, Regency Property, with which he’d joined forces, and the Great Recession.

High Development brought the Kum & Go convenience chain to Tiffin in 2007-2008, followed by Quality Care Storage Co., a self-storage facility. Both are located on Village Drive, which was extended into the commerce park with a state RISE grant. The company donated more than 30 acres to the city for a new park.

With the growing interest in Tiffin, Mr. High now expects to land other highway convenience businesses such as restaurants and hotels in the commerce park.

Mr. Berner sees the continued growth in residential going hand-in-hand with commercial development, although the city might be seeing more rental units developed than in the past because of the needs of the retail workforce. He said the city council was probably hoping for fewer rental units than proposed in Park Place, but retailers need to have rooftops nearby not only for shoppers, but to house their own employees.

On a recent tour of the city, Mr. Boldt discussed the rapid pace of lot sales in existing subdivisions, and several new projects that are just starting. He said the city has invested more than $1 million in parks since developing a new parks plan, and is working to expand a recreational trail connection through the city that will be a vital cog in linking Coralville to Johnson County’s Kent Park.

Tiffin’s planning and zoning efforts have placed a strong emphasis on creating smooth transitions between housing types. The city recently approved a new front yard setback ordinance that will discourage “snout houses” – those with garages prominently protruding from their front – in the zone that will make up much of Park Place’s residential subdivisions.

Mr. Andersen said Ders Group has sold 48 lots since October 2017 in Park Place and in its nearby Woodfield 6 & Woodfield 7 subdivisions. It has been a supporter of the city’s zoning efforts, believing they will create better neighborhoods, and is even planning to build a model home that will demonstrate how to maximize home design with the new setback regulations.