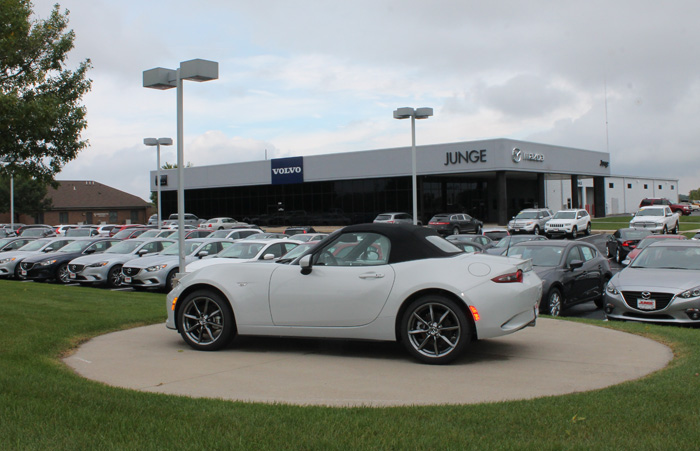 A Mazda MX-5 roadster sits on display at the new Junge Automotive Group dealership at 1200 Boyson Road. Hiawatha has seen a flurry of development in its automotive cluster.  PHOTO/DAVE DEWITTE

With more dealers than it’s ever had before, the city of Hiawatha is hoping to leverage its newfound automotive retailing clout to grow other retail areas.

The past year has seen a flurry of activity in the city’s auto retailing cluster, starting with the opening last fall of a new $12.5 million dealership by Dave Wright Nissan Subaru at the busy corner of Boyson and Center Point roads.

Cedar Rapids Toyota in May completed a $5 million expansion of the former Cedar Rapids Volkswagen space at 1190 Boyson Road, while its former location at 1200 Boyson Road was sold for $4.1 million to Junge Automotive Group for its Mazda, Lincoln and Volvo dealerships. That facility, which opened in July, almost doubles the space Junge had at its former home at 1510 Collins Road NE in Cedar Rapids.

It’s a good time for an dealership boom. Sales are on track for a record year nationwide, according to the National Automobile Dealers Association (NADA). A combination of low interest rates, low gas prices and improvements in vehicle safety and fuel efficiency are propelling sales toward the trade group’s forecast of a record 17.7 million cars and trucks, up from 17.3 million in 2015.

Hiawatha got its first new car dealership about 15 years ago when Allen Chapman brought his Allen Motor Co. to the northeast corner of the Interstate 380/Boyson Road interchange. The location offered good line-of-sight visibility from the interstate, and is only a few miles from existing Honda, Dodge and Chevrolet dealerships on the north side of Cedar Rapids.

Since opening under Allen Motor Co., the dealership has been transferred to Lithia Motors, and more recently the McGrath Family of Dealerships, which continues to offer GMC, Cadillac, Buick and Kia brands.

Hiawatha leaders haven’t had to recruit auto dealerships from other cities.

“Quite honestly, it’s driven by the fact it’s right off 380,” said longtime Hiawatha City Council member Dick Olson, who is also a founding member of the Hiawatha Economic Development Corp. “You get right off on Boyson and it doesn’t matter if you go right or left, you’re at a car dealership.”

The city was quick, however, to realize the value of dealerships. Auto dealerships employ an average of 67 people, according to NADA. Cedar Rapids Toyota employs about 100, according to General Manager Chris Langhurst, while Junge Automotive Group employs at least 40.

“We feel it [attracting dealerships] is part of the overall smart growth plan to get people to come to Hiawatha,” Mr. Olson said. “It’s part of the whole dream of creating a village center, and having the hospital come out here and more restaurants – to give people a place to go out for dinner or shopping.”

The city also greased the wheels for dealerships about five years ago when it expanded its tax increment financing (TIF) program. That allowed retail developments to qualify for Hiawatha’s standard TIF incentive of a five-year, 75 percent tax abatement under two primary conditions: The project had to be a new car dealership, and it had to represent an investment of at least $3 million.

“It was in response to a need,” City Administrator Kim Downs said. “A couple [dealerships] have taken advantage of it. We had one dealership that used it as an incentive to enhance their current facility.”

The Dave Wright Nissan Subaru project may be a good example of one that wouldn’t have taken place without the TIF change. Mr. Wright acquired and consolidated more than a dozen parcels of residential and commercial property and demolished structures to make way for the 40,000-square-foot dealership, but still had to deal with unexpected and costly development expenses related to the high water table under the property.

The new dealership has space for 455 vehicles and is attracting “significantly more traffic” than its former location, Mr. Wright said.

Dealerships prefer to be part of a cluster of new car sales options for shoppers.

“The location is accessible,” Orrin Smith, director of sales for the McGrath Family of Dealerships, said in an email. “With multiple dealerships in Hiawatha, this becomes mutually beneficial for both the dealership and the community.”

“Competition forces everyone to do their best,” he added.

If there’s any secret sauce to Hiawatha’s success with dealerships, it’s in the way city interacts with them on development issues.

“I was really pleased with the cooperation of the city,” Mr. Wright said. “They have their rules and drew some lines in the sand that you didn’t always like, but they oftentimes came up with solutions and suggestions even before I would meet with them to help offset what those would have been. They were very responsive.”

That’s no accident, according to Ms. Downs.

“It comes down to customer service,” she noted. “Often, people don’t remember what you told them, but they remember how you made them feel.”

Not all of Hiawatha’s dealership news in the past years has been good. The Volkswagen dealership that has been in Hiawatha for about two years is headed back to its former location in Marion.

The McGrath family previously acquired the Volkswagen franchise from the Ryan family, which owns Cedar Rapids Toyota, and moved it to its 1090 N. Center Point Road dealership complex from 657 Blairs Ferry Road in Marion, which it converted to its Marion Used Car Superstore.

Facilities requirements by Kia, one of the other main brands in the McGrath Family of Dealerships, resulted in a need to move Volkswagen, President Pat McGrath said.

The silver lining to the Volkswagen move is that McGrath is now making a large investment to update the look and functionality of its Kia dealership in Hiawatha.

Since the arrival of two new dealerships and the relocation of Cedar Rapids Toyota, it’s unclear whether the powder behind the exploding Hiawatha auto scene has all been spent. A national used car chain looked for a site in Hiawatha, real estate specialists say, but now appears to have settled on a site in a new development in northeast Cedar Rapids.

“Honestly, I think there are still great opportunities for dealerships in that area,” Ms.

Downs said. “There’s still land that is visible from the interstate, which is what they’re interested in – visibility, easy access and they like being next to each other.”

Not everyone shares Ms. Downs’ view. Commercial real estate specialist Scott Olson of Skogman Commercial said he’s only aware of one big parcel at the I-380/Boyson Road interchange suitable for a dealership, and so far the owner has not been interested in selling.

Mr. Wright also has his doubts.

“I think if more auto dealers came to the area that would be great, because you’d have more of a draw,” Mr. Wright said. “Unfortunately, car dealerships need a lot of ground. They need acres. So, I think there’s not much left out there that we can bring this way anymore.”

Even if no additional dealerships arrive, Hiawatha leaders see the opportunity to attract big box stores and other retail that can feed off the dealership traffic. The city also hopes to offer more housing opportunities to keep dealership employees living and working in town.

“Part of our plan is to provide apartments and condos for not only employees of dealerships, but the 600 employees of GoDaddy,” Mr. Olson said.

And don’t forget car washes for all those residents and dealer customers. Mr. Wright is currently completing Wright Wash, which is expected to be the Corridor’s largest car wash, at 755 N. Center Point Road, for an opening as early as this month. The 13,500-square-foot car wash will serve both the general public and keep vehicles on the dealership’s own lot clean.