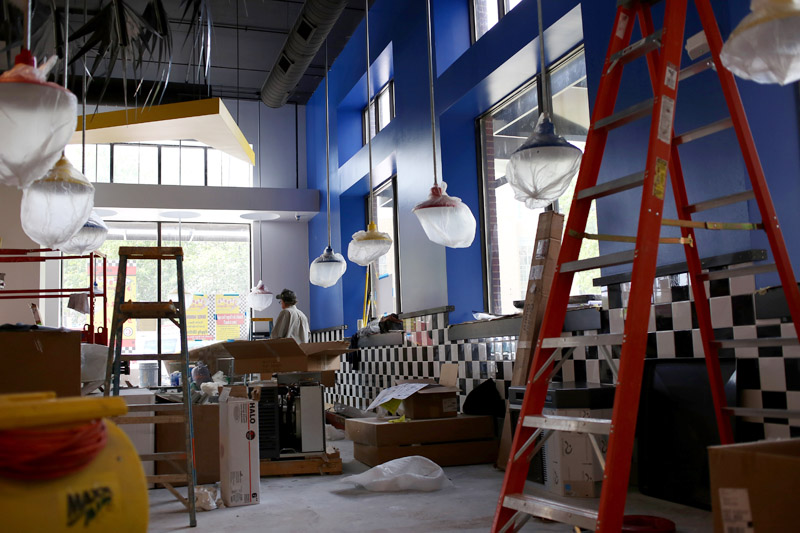 IOWA CITY—A new downtown restaurant is among the first of its kind in the Midwest.

Teddy’s Bigger Burgers opened this week at 328 E. Washington St. The fast casual restaurant based in Hawaii is the first of several planned to open in Iowa. Along with the Iowa City location, Teddy’s is opening other locations in Oahu, Hawaii, southern California and Seattle. Eventually, plans are to expand across the U.S., said Ted Tsakiris, co-CEO of Teddy’s Bigger Burgers.

Teddy’s bills itself as a 1950s-style, burger and milkshake joint. The grand opening was Aug. 18.

“We cook everything to order and we do actually build the burgers to what they look like in the pictures,” Mr. Tsakiris said.

“The meat we use is what you would see in nice hotels and restaurants, but we make sure to keep the price as low as possible,” Mr. Tsakiris said.

Sandy Ting, the Iowa City franchisee/proprietor, fell in love with Teddy’s Bigger Burgers while she was attending college in Hawaii. She wanted to bring the brand back to Iowa.

She has lived in the Corridor and spent 20 years in the restaurant business, many at her family’s restaurant, Ting’s Red Lantern in Cedar Rapids.

It took about a year for Ms. Ting to be ready to move forward to open a Teddy’s, Mr. Tsakiris said. Her work ethic and knowledge of Iowa got him on board with building here.

Ms. Ting plans to open five or six more Teddy’s Bigger Burgers in Iowa over the next three to five years.

“I love the burger and I thought Iowa needs one of these,” she said. “I’ve been (working at restaurants) for 20 years, it’s innate for me, it’s what I grew up with.”

Mr. Tsakiris said Iowa City was a great location with the University of Iowa student population.

“In every seed market, our primary concern is to convince the customers that we’re not fast food,” Mr. Tsakiris said. “Teddy’s for a lot of people is their fine dining experience. We’re not McDonalds.”

Teddy’s Bigger Burgers got its start in the backyard cookouts of owners Mr. Tsakiris and his business partner, Rich Stula. The two loved good burgers but couldn’t understand why there weren’t any fast food restaurants that offered the quality of their home-cooked burgers in a quick-service environment.

So they set out to create a restaurant that served quality burgers in an energetic environment. After studying the simple menus of the original 1950s burger joints, they decided to reinvent the burger joint with a 50’s theme and a simple menu of burgers, fries and shakes. The first restaurant opened in Honolulu in 1998.

“I started this place from the belly, not the bottom line,” Mr. Tsakiris said.

Teddy’s uses 100 percent ground chuck (no fillers or binders). Burgers are hand-pattied daily and cooked to order. The restaurant makes its own sauces, including Super Sauce and Teriyaki.
“It’s a down-to-earth, honest-to-God burger joint,” he said.